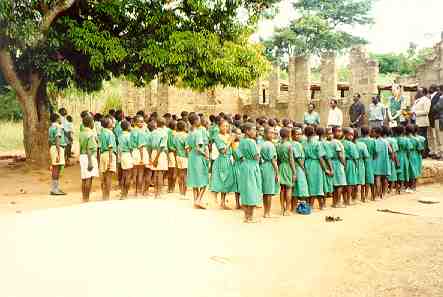 Teaching in Africa, but learning so much more

URBANA – Stephen Dolan will be the first to advise working professionals not to ignore those trade journals that stack up as their would-be readers wait for a rainy day.

The Carle Clinic infectious disease doctor spied an item in one that ultimately took him, his wife, Lisa Sechler, and their three daughters to Africa last year.

Although Dolan was there to teach African doctors about the treatment of AIDS patients, he and his family ended up being the ones to get an education.

"Oh, no, I don't feel like I made a difference," he said of his almost four-month stint in Uganda from late August to mid-December last year. "But I learned a lot. I certainly didn't come away depressed."

A Carle doctor since January 1999, Dolan, 51, said he went to Uganda as part of an informal arrangement among American, Canadian and Ugandan physicians. Although he wasn't paid by Carle during that time, the clinic gave him a leave of absence and continued his health insurance while he was gone. And colleagues Cora Musial and Rana Zaman took care of his patients.

His wife, a Peace Corps volunteer in Sierra Leone in West Africa in 1985, 1986 and 1987, urged him to take advantage of the opportunity.

Sechler, 40, said she felt like she "didn't even grow up" until she was in the Peace Corps, an experience she loved. She worked as an agricultural extension agent helping women grow vegetables to sell.

"I – we – love Africa," said Sechler, adding that she and Dolan spent almost a year in Mali in west Africa from June 1993 until just before Amalia was born in April 1994. Dolan was doing malaria research through the National Institutes of Health at the time.

About twice the size of Pennsylvania, Uganda has about 25 million inhabitants, whose per capita income is about $1,000, according to the World Almanac. Dolan put the figure at $250, saying most are subsistence farmers.

One in 10 is infected with HIV, the precursor virus for AIDS, Dolan said.

"I wanted to get a sense of how big HIV is over there," said Dolan, using adjectives like "terrible, progressive and almost overwhelming" to describe the magnitude of the problem."

"If I were God, I'd be ashamed of myself for letting this happen.

"I think the enormity of the problem, the lack of education, particularly in the rural areas, is going to preclude any ability to control any epidemic," he said.

Dolan said while 10 percent of infected Ugandans need treatment, the reality is that only about 10,000 are actually getting help.

"It is the ultimate fee for service" plan, he said, saying only those who can pay get help.

Hospitals, he said, are places to die as opposed to places to get help because the government provides beds only, not even food service or drugs. And the beds are jammed into wards "cheek by jowl," he said.

By comparison, Dolan estimated that about 25 percent of his patients at Carle are HIV-positive or have AIDS.

"I went over as a second set of American trainers whose job it was to train Ugandan doctors in the use of AIDS anti-retrovirals," he said.

They would teach for four weeks at a time, doing a halfday of lectures Monday through Friday, followed by trips to clinics or hospitals. They trained 31 Ugandan doctors, he said, in 3 ½ - months.

The Ugandan doctors are excellent at recognizing the signs and symptoms of patients with HIV, Dolan said, but because of their lack of access to medicine, they lack the ability to treat.

Dolan said he was happy to hear President Bush, in his state of the union address in January, talk about sending $15 billion to Africa for AIDS relief, including generic drugs and condoms.

"All that money for drugs might slow the epidemic," he said, "but ultimately we need a vaccine. People are looking for that and have been doing so for 15 years. There's no good candidate (yet)."

While Dolan was teaching, Sechler and the girls were doing their share of learning as well.

Unlike many of the other doctors who were there without families, they lived in an apartment. Dolan and Sechler said they wanted to give their children the opportunity to learn about a different culture. Sechler spent three years in India as a child with her parents. Her dad was an agriculture professor at the University of Missouri.

Sechler said they did most of their own cooking, going to the market frequently for fresh food. Not having a car meant things took longer to get done. They paid a woman to do their laundry by hand since there aren't washers and dryers.

Amalia and Mara attended Kabira International School, a British school. Lisa and Zina volunteered time at an orphanage, playing with the healthy children and rocking and otherwise comforting the not-so-healthy.

"One baby died who was Mama's favorite," piped up 4-year-old Zina, when asked about her experiences. (Dolan volunteered that children don't get tested for AIDS because there's no money to do so and no drugs to treat them if they're diagnosed. Sechler said families also don't want their children to live with the stigma of being HIV-positive.)

The girls said they didn't take much with them except a few books and dolls. The older girls were able to keep in touch with their classmates at Wiley School in Urbana by e-mail, so they could share their international experiences.

On weekends, the Dolans would hire a taxi driver to take them on day trips, mostly to other places in Uganda, which they described as rolling, green and lush. Uganda lies on the equator so the weather is great – about 85 degrees Fahrenheit during the day and 55 at night.

With the British style of driving, Dolan and Sechler declared it "too wild" for them to get behind the wheel. Seat belts and car seats are nonexistent.

Dolan said the family met people through the girls' school and through his work with the other doctors with whom they will likely remain friends.

This story has been posted in the following forums: : Headlines; COS - Sierra Leone; AIDS; Medicine; COS - Uganda; Service; HIV