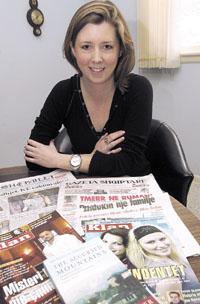 From Greenville to Albania

Greenville High School graduate Bernadette Roberts will spend the next two years as a United States diplomat in Albania, home to the magazines and newspapers in front of her. -- Daily News/Joe Veslenak

Her knowledge of Eastern Europe's culture and language is similar to someone who lives there.

The United States government is making certain of it. That's because after a year of training and a career of travel, Bernadette Roberts soon will serve as a diplomat in the American Embassy in Albania.

"I really am looking forward to going," said the 32-year-old Roberts. "It's exciting for me."

She has been living in Washington, D.C., since 2000. Last weekend, Roberts visited her hometown of Greenville. Her mother, Barb Murphy, lives here while her father, Hugh Roberts, resides in Fenwick.

"They're not thrilled I'm going away but they're happy for me," she said.

"I'm a bit worried because some of those countries are anti-American," her father said. "But she knows a lot about their culture and way of life. I'm extremely proud of her."

After graduating from GHS in 1990, Roberts attended St. Mary's College in South Bend, Ind., where she majored in political science. After graduation she worked for U.S. Sen. Carl Levin, D-Detroit. Roberts then volunteered for the Peace Corps and spent two years in Romania. There she learned the language and found a love for Eastern Europe.

"I'm happy about getting the chance to move back to that area," Roberts said.

In 2000, Roberts sought work with philanthropic organizations in New York City. She eventually found a job assisting with philanthropic work in Washington, D.C. During that time Roberts earned her master's degree in international relations at American University there.

After a few years in D.C., she learned of openings within the State Department and applied. Roberts was accepted as a foreign service officer.

Since then, she has prepared, through the Department of State, for life in Albania. Roberts has been working to learn the language. She will leave for Albania in April.

Roberts will spend the next two years working to "promote U.S. policy" in Albania. She said the country is "pro-American," which will make the transition living abroad easier during a time when many other nations in the region are supportive of the United States.

"I'm not scared but I do think about Albania's gender hierarchy," she said.

Albania is 70 percent Muslim so all the decision-makers are male. However, Roberts called Albania a "liberal Muslim country," meaning women are allowed to go out in public. For Roberts, it means she won't have any trouble if she wants to see a movie by herself.

"She's gone quite a long way since Greenville High School. This is quite an opportunity for her," said her longtime friend, Bob Powers of Eureka Township. "She's always wanted to go overseas. She wanted to go so bad she joined the Peace Corps."

The usual routine for United States diplomats is to spend two years in a country. From there, they get some say about where they'll move next. Eventually, Roberts will move to another embassy in another country. For now, though, her mind is on her upcoming Albanian adventure.

"You'd like to see the country do well," she said. "It's good for the United States if Albania does well."

# Albania is slightly larger than the state of Maryland. Its capital is Tirana, a city of 700,000 and the base of the United States Embassy.

# Albania shares a border with Greece to the south and southeast, Macedonia to the east, and Serbia and Montenegro, including Kosovo, to the north and northeast. Eastern Albania lies along the Adriatic and Ionian Sea coastlines.

# Albania is situated in the southwestern region of the Balkan Peninsula.

# The nation is predominantly mountainous but flat along its coastline with the Adriatic Sea.

# More than 90 percent of Albania's people are ethnic Albanian and Albanian is the official language. Religions include Muslim, Albanian Orthodox and Roman Catholic.

# Albania's government can be described as parliamentary democracy. Its constitution was adopted by referendum on Nov. 28, 1998.

# Albania is one of the poorest countries in Europe. It was the last of the central and eastern European nations to embark upon democratic and free market reforms.

This story has been posted in the following forums: : Headlines; COS - Romania; COS - Albania; Diplomacy