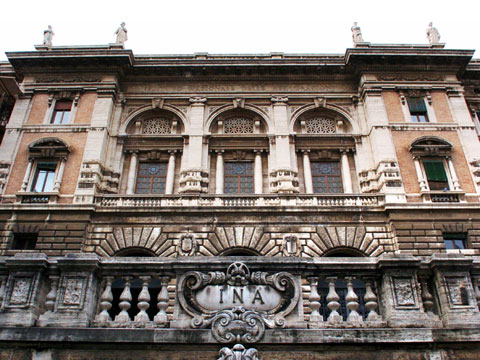 Narcissus Is Now Greek AND Roman

The media blew it once again last week, focusing on President Bush's fence-mending trip to Europe. There were countless stories about yet another presidential visit across the pond where world leaders said things they surely didn't mean.

The big news was not in Brussels or Bratislava, but in Rome, where real history was made with the dedication of the Mel Sembler Building. This lovely, ornate building in the heart of the Eternal City had been put up for sale a couple of years ago by an Italian insurance company. U.S. Embassy officials jumped at the chance to consolidate outlying offices in a more secure location near the embassy.

And who better to negotiate the $83.5 million deal than the ambassador himself, a wealthy former shopping center developer in St. Petersburg, Fla., and former Republican National Committee finance chairman who gave the GOP boatloads of money over the years?

And this would be . . . yes, Mel Sembler. In 1989, President George H.W. Bush rewarded Sembler with a fine ambassadorship in Australia. But the money kept coming in, and Sembler got the RNC post in 1997. So by 2000, something much better than Canberra was only fitting. Only one of the great ones -- say, Rome -- would do.

But how is it the building came to be named for a sitting ambassador? This is something that apparently has never happened in U.S. diplomatic history, no matter how meritorious the diplomat. Not even for such folks as Llewellyn Thompson or Charles "Chip" Bohlen, both ambassadors to Moscow during the darkest days of the Cold War. 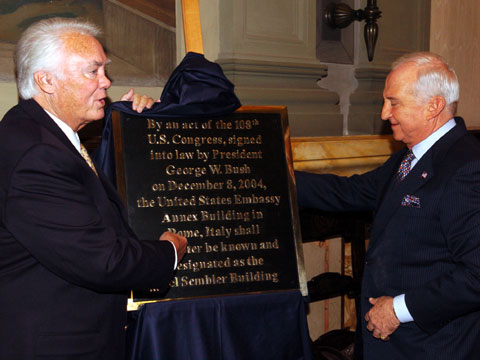 Well, turns out that in December, Congress passed a bill saying the annex "shall hereafter be known and designated as the 'Mel Sembler Building.' " Who did this? None other than Sembler's pal, Rep. C.W. Bill Young (R-Fla.), who was then chairman of the House Appropriations Committee. We know this from watching the stirring video of the Feb. 22 dedication -- available on the embassy Web site.

"I spoke to President Bush just a few days ago," Young said, "and told him that I was coming here to be with you and what we were going to do today."

Bush thought this unusual. "And he said," Young recalled, " 'We don't do that, do we? We don't name buildings for ambassadors where they have served.' And I said, 'Mr. President, I introduced the bill and you signed it.' " (Don't blame Bush for not noticing one line tucked into the omnibus appropriations bill.) Young and Rep. Rodney P. Frelinghuysen (R-N.J.) flew to Rome for the ribbon-cutting. 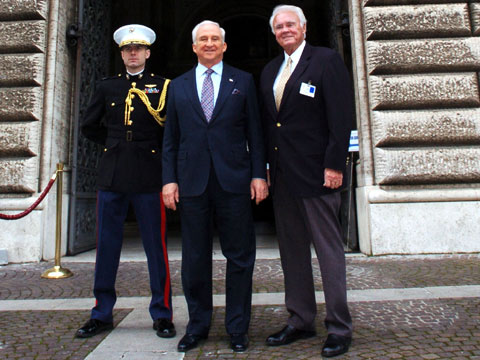 Young proudly gave Sembler a copy of the legislation, adding that the historic move came about not "because of some bureaucratic decision but by an act of Congress." Couldn't have happened any other way. The bureaucrats would have known better.

And he presented Sembler with a large bronze plaque to be affixed to the Mel Sembler Building. 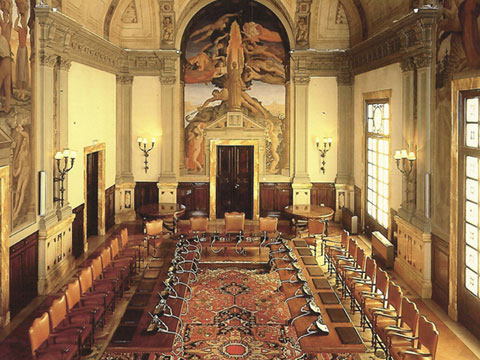 But there was more. If you go, as you should, to the Web site to look at the stunning photo display, you'll come to a gorgeous photo (shown above) of the frescoed ceiling of the C.W. Bill Young Conference Center right there in the Mel Sembler Building. And there are a couple of fine bronze plaques naming the center that go on the walls there.

And so it is only fitting that, despite this being only early March, the coveted In the Loop Narcissism Run Amok Award for 2005 goes to Sembler and Young for their efforts to establish an excellent new trend in American diplomacy. (Hey! How about Palais Korologos in Brussels? Palacio Argyros in Madrid?) On the other hand, if Sembler had paid for the building . .

For more photos of the Mel Sembler building click here.

This story has been posted in the following forums: : Headlines; COS - Tunisia; Journalism; Diplomacy; Fund Raising; Italy; Humor