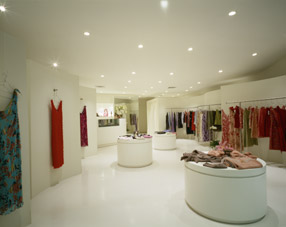 Thanks, Poppa: Medoff's late paternal grandfather, Alex Medoyeff, escaped from Russia during the Bolshevik Revolution. He Americanized his name at Ellis Island and referred to Lynn as Lena.

Dressed-up threads: Medoff specializes in wedding attire and clothing for other special events. "I try to keep things classic, almost traditional in a sense. It's clothing I hope people can wear for years to come."

Peace Corps seamstress: Medoff enlisted in the Peace Corps in 1993 and was sent to Lanquin, a small town in Guatemala with no running water or electricity. Her neighbor, the village doctor's wife, taught her to sew on a treadle sewing machine.

The hands have it: "All of our clothes are silk. Our fabric is made in a small, family-owned mill at the foothills of the Himalayas in India. They're handmade, handwoven and embroidered and painted by hand." Medoff also makes all her patterns by hand.

Artsy fabric: Fabrics are handpainted with floral designs or traditional Indian patterns. The owner of the mill goes to Paris to buy artwork, then copies those designs onto the fabric.

Almost famous: All of Medoff's designs are named after employees, friends and her dogs. The "Aimee," named after a longtime pal, is better known as the "Flutter Dress" with its hundreds of 2-by-2-inch silk squares. The "Britton," named after her husband, is a silk skirt with an asymmetrical flounce that drops to the knees.

Says no to too short: "I won't do a short-short skirt. It doesn't have the staying power."

But yes to sashes: Medoff's sashes can be tied around the neck as a halter, on the shoulder or behind the back.

Old schools: Attended Oregon Episcopal School, graduated from Sunset High School in 1984 and University of Oregon in 1988 with a degree in English.

This story has been posted in the following forums: : Headlines; COS - Guatemala; Small Business; Clothing