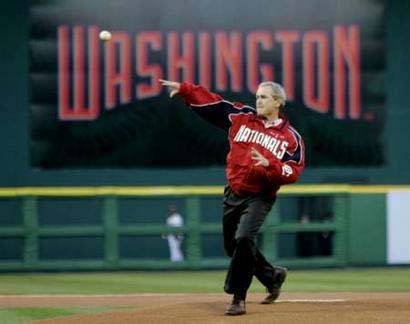 First Fan Knows His Way Around the Diamond

And now, the In the Loop Award for political reporting goes to Washington Post sports columnist Thomas Boswell for his insightful coverage of opening day for the Washington Nationals at RFK Stadium and particularly his interview of Nationals President Tony Tavares.

Tavares, who had chatted with President Bush and Major League Baseball Commissioner Bud Selig, said Bush was "so up on the game that it's astounding." At one point, he said by way of example, a question arose as to who was the best catcher in the National League.

"I blanked on who catches for the Phillies," Tavares said. "I asked the commissioner. He didn't know. The president said, '[Mike] Lieberthal.' "

Bush's sports expertise seems to go beyond the majors, even beyond baseball. In the latest edition of Alumnews, the journal for graduates of Georgetown Prep in Rockville, writer Joseph Seib, son of the Wall Street Journal's Gerald Seib, recounts meeting Bush at the most recent White House Christmas party for reporters.

Bush, upon learning that Joseph played baseball for Prep, asked, "Is your league going to boot your baseball team out of the league for being too good like they did the football team?"

Not bad for a guy who says he doesn't read the newspapers. 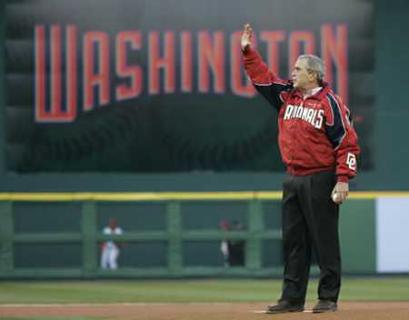 This story has been posted in the following forums: : Headlines; COS - Tunisia; Journalism; Humor; Presidents - Bush; Sports; Baseball