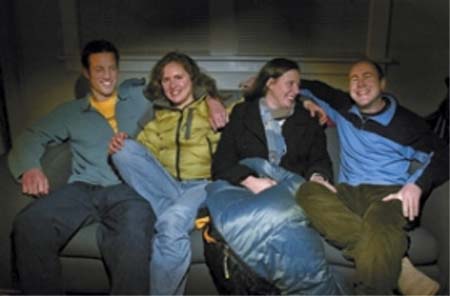 “We’re not burning fossil fuels,” Kaplowe says, “and we’re very efficient thermoregulators.” McDougall laughs at this. He’s wearing a T-shirt and is barefoot on the hardwood floor. “The no-heat thing started in college when we didn’t have the money for it and then realized we didn’t need it anyway,” Kaplowe says. The household heating bill from NW Natural arrived Nov. 1. The total due was $6.54.

The Portland Tribune 16 hours ago

Caption: Roommates Dave Kaplowe (left) and Stuart McDougall try to use as few resources as possible, such as keeping the heat off in their house. Girlfriends Andrea Walter (second from left) and Katy Daily do their best to humor them. Photo: Jonathan House/Pamplin Media Group

There are some priceless sustainable-life moments every day in the small bungalow duplex Dave Kaplowe, 30, and Stuart McDougall, 30, share in Northeast Portland.

There was an incident recently with Kaplowe involving paper products.

“I opened up Dave’s closet and there were layers of tissue air-drying on the floor — reused,” says his girlfriend, Andrea Walter, 29.

Kaplowe, recovering from a cold, says reusing his unbleached brown paper towels is no matter to sneeze at. “Tissue isn’t recyclable, but eventually it loses its useful life,” he explains. He also dries a collection of handkerchiefs.

After a breakfast of blueberry pancakes, the two couples sit down in their unheated home to talk about their spartan lifestyles. McDougall is dating Katy Daily, 39. After breakfast Daily and Walter are still wearing jackets.

“It’s warmer outside,” Walter says, blowing on her tea. “We make sure to wear down jackets. It’s like a camping experience.”

She’s referring to Kaplowe and McDougall’s staunch refusal to heat the house. No exceptions.

McDougall laughs at this. He’s wearing a T-shirt and is barefoot on the hardwood floor.

“The no-heat thing started in college when we didn’t have the money for it and then realized we didn’t need it anyway,” Kaplowe says.

The household heating bill from NW Natural arrived Nov. 1. The total due was $6.54.

The men are so pleased they present a hard copy while Daily rolls her eyes.

The women may wish for warmer digs, but Kaplowe says there can be no compromise.

“Unless you count the heat from the electrical appliances,” Daily shoots back.

“The girls and we have a friendly competition, but they’re not going to win with the heat bill,” McDougall says.

Actually, the women may be winning on the electricity front.

“They use plenty of electricity,” Daily says. “My electric bill is lower than theirs. They could use the Blue Sky option, I want them to use it, but they don’t.”

Daily is talking about Pacific Power’s Blue Sky renewable energy program. Blue Sky is a voluntary, customer-supported program that develops the clean, renewable power of wind to generate electricity (for $2.95 a month).

Kaplowe nods and doesn’t say no, because while the women use heat, they can cut back on electricity by hanging their clothes to dry. The men would if they could, but simply cannot in winter because it’s not warm enough inside to air-dry clothes.

Daily sees her chance: “You guys don’t have a low-flow washer.”

“Hey! That’s because we rent,” Kaplowe protests. “We can control our lights,” he says, almost apologetically, “so we switched to compact fluorescents.”

Compact fluorescents, $6 heating bills, probiotic raw sauerkraut in the fridge — just who are these four environmentally conscious adults? Right now they could be watching Sunday football in front of a big-screen TV, eating takeout brunch in Styrofoam containers and washing six loads of laundry for the next week — all in 70-degree heated air.

Yet they aren’t and they don’t need to. Their lifestyle isn’t any less pleasant or exciting or fulfilling because they choose not to. In fact, each would argue their lives are made richer and more interesting by the way they live.
Working hard, working smart

The University of Oregon graduate was drawn to the BPA after serving nearly four years with the Peace Corps in Guatemala, Honduras and El Salvador. While in the Peace Corps he helped rural communities, nongovernmental organizations and trinational government organizations adopt sustainable forestry and watershed management practices.

Instead of working on watershed management in three Central American countries, he now works with very similar issues in the four states that make up the Columbia Basin — Oregon, Washington, Idaho and Montana.

“I believe hydroelectric power is a renewable resource and a great alternative to the burning of fossil fuels or nuclear-derived power,” Kaplowe says. “The BPA demonstrates environmental stewardship and public responsibility.”

McDougall is from Melbourne, Australia. He recently finished his doctorate degree and is working in a research lab studying electrophysiology at Oregon Health & Science University.

Daily is the political director for the Oregon League of Conservation Voters. Watch for legislation for an electronic waste bill that makes it free to drop off computer monitors and out-of-date televisions. She also is a Master Recycler.

Walter is earning her master’s degree in teaching from Lewis & Clark College with a focus on social studies and language arts. She served in the Peace Corps in Uzbekistan.
Activities help the planet

The four all bike to work, as well as recycle everything from toilet paper rolls to yogurt containers, supplement meals during summer with crops in a small city garden plot, eat hormone-free if possible — and stump for the environment.

McDougall volunteers for the Oregon Food Bank once a month, splitting bulk food items into smaller portions to be distributed to the rest of the state.

Kaplowe and Walter joined Daily in helping recruit phone volunteers to drum up support for environmental candidates in the recent election.

Everyone’s idea of a good time is getting outside. Conscious of gas consumption, they carpool to the mountains to cross-country ski and backpack.

About the only other time Kaplowe uses his car is to go surfing. In winter he dries his wetsuit socks in front of the kitchen stove (remember, no heat).

“It’s difficult to be an environmentalist because there’s so much consumption here,” Kaplowe says. “I feel like I do the best I can.”

We’re all going to have to start making some changes, McDougall adds.

This story has been posted in the following forums: : Headlines; COS - Guatemala; Environment; energy