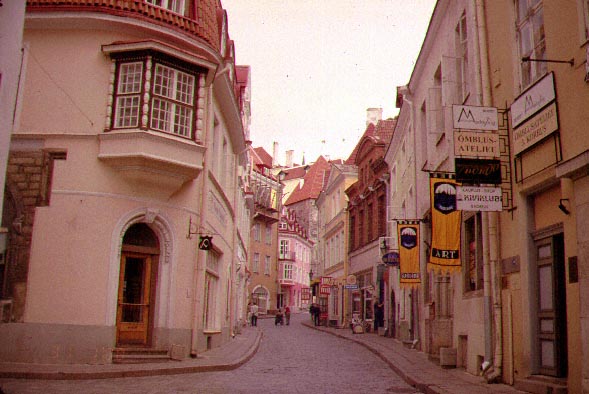 "The paths available to nations coping with the grim and often sanguinary legacies of communism are few. There is the Russian way: Retain, defend, and celebrate the most singularly awful aspects of communist rule. There is the Uzbek way: Swap the name of the Uzbek communist party for the People's Democratic Party of Uzbekistan; carry on forthwith. There is the Vietnamese way: Preserve communism's ceremonial, revered-elders overlay; disown most of the economic advice. And there is the Chinese way: Change everything, admit nothing. In light of all this, it is sadly difficult to imagine a post-communist nation achieving governmental transparency, an uncorrupted economy, and lives for its citizens untouched by the tentacles of a busy secret police force." Author Tom Bissell served as a Peace Corps Volunteer in Uzbekistan.

The paths available to nations coping with the grim and often sanguinary legacies of communism are few. There is the Russian way: Retain, defend, and celebrate the most singularly awful aspects of communist rule. There is the Uzbek way: Swap the name of the Uzbek communist party for the People's Democratic Party of Uzbekistan; carry on forthwith. There is the Vietnamese way: Preserve communism's ceremonial, revered-elders overlay; disown most of the economic advice. And there is the Chinese way: Change everything, admit nothing. In light of all this, it is sadly difficult to imagine a post-communist nation achieving governmental transparency, an uncorrupted economy, and lives for its citizens untouched by the tentacles of a busy secret police force.

In September, I traveled to Estonia--and found what appeared to be paradise. In Tallinn's airport, passing through customs took seven-and-a-half minutes. Compared with any other European capital, or even any midsized U.S. city, traffic was laughably light. Mercedes-Benz 350s and Lexus SUVs prowled the cobbled streets of Tallinn's truly lovely Old City. Technologically, Estonia seemed like a planet from a Flash Gordon serial: Clicking on my AirPort icon just about anywhere I went in Tallinn resulted in a Homeric catalog of free wireless providers, and I learned that newspapers can be purchased from vending machines with a cell phone and that voting can be done online via a national-identity card. Tallinn's striking Museum of Occupations, which details Estonia's dreary experiences under Nazi and Soviet rule, was rigorously detailed and scholarly while, at the same time, admirably restrained. (It also treated frankly the matter of many Estonians' collaboration with the Nazis.)

As for Tallinn's nightlife, it seemed genuinely fun and welcoming--if, that is, one could overlook the drunken Scottish men giving one another comradely punches in the face on their way to the next strip club. One night at a disco, a woman, for whom the phrase "out of my league" had been invented, waved me onto the dance floor to join her for an encore of "Welcome to Estonia," a popular local anthem sung to the tune of James Brown's "Living in America." Tallinn boasted what I can say were--without fear of hyperbole--the most jaw-droppingly beautiful women I have ever seen in my life. (One Estonia-boosting tract cheerfully explains: "The concentration of beautiful and interesting women in Estonia is apparently among the highest in the world.") Perhaps relatedly, the one time I was approached by a young Estonian looking to unload some drugs, the narcotic in question turned out to be Viagra.

My last night in Tallinn, a cash machine captured my bank card. While I pounded on the screen, an Estonian man approached, whipped out his cell phone, called the bank's 24-hour help line, and arranged for me to pick up my card the next morning at the bank's main branch. I thanked him, not quite believing my card would be there. The next morning, I turned up at Hansapank to find at the help desk a six-foot-two-inch Estonian Amazon so glowingly blonde she appeared to be irradiated. I made sheepish mention of my plight, upon which she smiled, reached into her desk, withdrew an envelope, and, after a cursory scan of my passport, handed me my bank card.

Estonia, I initially thought, had managed to forge a real place for its ethnic Russians--unlike many former Soviet republics, whose ethnic populace sneers at the Russians with whom they grew up. Today, 26 percent of Estonia's inhabitants are ethnic Russians. Yet, after the collapse of the Soviet Union, Western nations had to urge Estonia not to expel them. Estonia didn't offer most of its Russians automatic citizenship; Russians born in Estonia before 1992 have to pass a language test and suffer questions about Estonia's new constitution. This sounds much easier than it is: Estonian is a Finno-Ugric language--which means that, other than Hungarian and Finnish, it has no widely spoken relatives--and the U.S. State Department ranks it as one of the world's more difficult languages. ("You have to be really smart to be Estonian," one Estonian told me.) Many Russians have refused to take the citizenship test, and a good number of those who have still don't fully identify as Estonian. "Russian children," an émigré Estonian businessman named Jüri Estam wrote recently in City Paper, "are being raised in Estonia in the spirit of denial."

In one of Tallinn's central parks stands the Tõnismäe Monument, which is home to a bronze statue of a Soviet soldier. This was thrown up during Soviet times to commemorate the "liberation" of Estonia from Nazi rule on September 22, 1944. In actual fact, the Soviets crushed the five-day-old independent government of Otto Tief and shot or dispatched to Siberia most of his ministers. The statue is, today, an annual gathering place for Tallinn's Russian population, most of whom refuse to acknowledge the reality of the malign and unwanted Soviet takeover--perhaps believing, however subconsciously, that Estonia remains a Russian colonial possession. This feeling is not mutual. Most Estonians loathe the statue--Estam was actually arrested in May when, during a counterdemonstration, he crossed a police barricade in an attempt to display the national flag of Estonia in what he calls "a respectful manner"--but the Estonian government refuses, for some reason, to remove it. Some claim this is because many within Estonia's parliament are unduly influenced by Russians; others maintain that the politics of confrontation is simply not the Estonian way. All of which meant that the tolerant ethnic wonderland I had wanted to see on my first visit was in fact riven by some depressingly familiar complications.

"Estonians would kill me for saying this," Hillar Lauri, a Canadian-born ethnic Estonian who relocated to Tallinn in 1991, told me, "but it is essential to the Estonian psyche to say that we are not Russian. And this country is about proving that Estonia is not Russia. How do you prove it? By working harder, by reforming, by changing." Near-Shoring, Lauri's Tallinn-based company, does accounting for non-Estonian businesses operating in Estonia. His work, combined with his Canadian upbringing, gives him a panoramic view of both how far Estonia has come and how much further it needs to go. "Any area that is state-regulated," he went on, "is corrupt. Hospitals and health care are terribly unreformed areas. ... But it takes time. There are a thousand Soviet mindsets that linger."

"Estonia was an independent republic between the two world wars," Andrus Viirg, the director for Foreign Investments and Trade Promotion for Enterprise Estonia, explained to me. "This mentality has helped us because of the existing memory of a market economy and democracy. The cultural closeness to Finland also helped. We were able to watch Finnish TV. No territory under the Soviet Union had this opportunity. After regaining our independence, it was very easy for the government to proceed with Western ideas."

Read the rest of this story (with free registration) here.


When this story was posted in January 2007, this was on the front page of PCOL:

This story has been posted in the following forums: : Headlines; Figures; COS - Estonia; Writing - Uzbekistan; COS - Uzbekistan