Michael L. Retzer replaced as US Ambassador to Tanzania 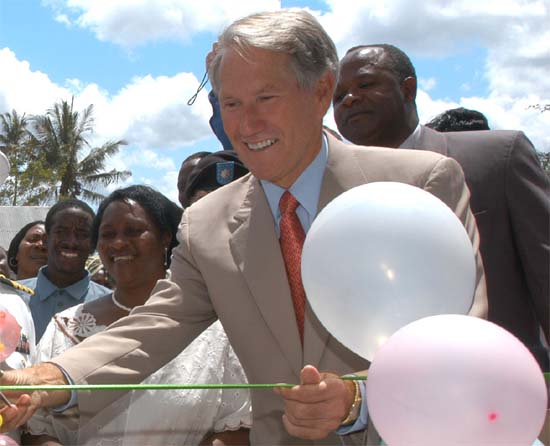 Michael L. Retzer replaced as US Ambassador to Tanzania

He has experience working in Africa

WASHINGTON — Fresh out of the University of Wisconsin Law School 20 years ago, Mark Green went to eastern Africa with wife, Susan, to teach in rural areas.

On Wednesday, the White House asked the Senate to send Green, 47, a former Republican congressman and unsuccessful gubernatorial candidate, back to eastern Africa — this time as U.S. ambassador to Tanzania.

Green could not be reached for comment, but nominees typically are cautioned to limit their public comments.

In 1987 and 1988, Green and his wife were volunteer teachers in Kenya with WorldTeach. While in Africa, they visited rural areas of neighboring Tanzania, Conant said.

Green, the son of a South African physician who opened a clinic in Green Bay, graduated from law school in 1987. He was elected to the House in 1998 and gave up his seat last year to run for governor. Since losing that race to incumbent Democratic Gov. Jim Doyle, he has worked as an attorney in the Green Bay office of the Godfrey & Kahn law firm.

His nomination will go to the Senate Foreign Relations Committee, which handles confirmation hearings for ambassadorial nominees.

"Mark is well qualified for this position and I intend to support his nomination," Feingold said Wednesday.

If confirmed by the committee, Green's nomination would be sent to the full Senate for a roll call or voice vote. He would replace the current U.S. ambassador, Michael Retzer, a Mississippi businessman and former state and national Republican official.

This story has been posted in the following forums: : Headlines; COS - Tanzania; Diplomacy; Country Directors - Tanzania