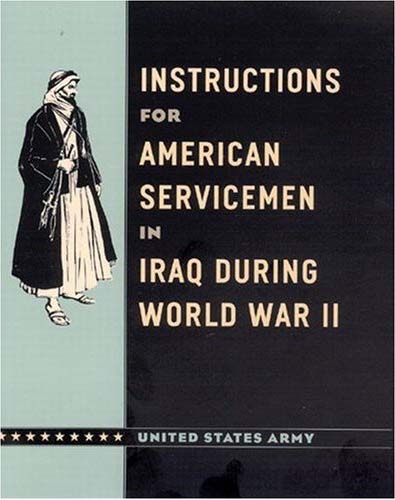 Long before Gen. David Petraeus co-authored the "Counterinsurgency Field Manual," the 1943 guide explained that "the best way you can [beat Hitler's agents in Iraq] is by getting along with the Iraqis and making them your friends. And the best way to get along with any people is to understand them." So "Talk Arabic if you can to the people," the primer advises. "No matter how badly you do it, they will like it." Washington Post reporter Al Kamen served as a Peace Corps Volunteer in Tunisia.

Rove's True Regret: It's a Rap

As the war in Iraq drags on, some folks talk about wishing everyone knew in 2003 what we know now. Turns out, we did.

The surprise hit book of this summer may well be a 44-pager by an unknown War Department writer in 1943 titled: "Instructions for American Servicemen in Iraq During World War II."

On the very first page, we learn that "American success or failure in Iraq may well depend on whether the Iraqis (as the people are called) like American soldiers or not. It may not be quite that simple. But then again it could."

The book warns against errant first impressions. "Most Americans and Europeans who have gone to Iraq don't like it at first. Might as well be frank about that. But nearly all of these same people changed their minds after a few days or weeks, largely on account of the Iraqi people they began to meet. So will you."

Long before Gen. David Petraeus co-authored the "Counterinsurgency Field Manual," the 1943 guide explained that "the best way you can [beat Hitler's agents in Iraq] is by getting along with the Iraqis and making them your friends. And the best way to get along with any people is to understand them." So "Talk Arabic if you can to the people," the primer advises. "No matter how badly you do it, they will like it."

The University of Chicago Press, which discovered and reprinted the original manual last month, has already gone through two editions (10,000 books), is printing a third, and is likely to go through a fourth. (This constitutes a mega-blockbuster for academic publishers.) "My initial take was that if we could get a few media outlets to notice it, we would have a success," said university press publicity manager Levi Stahl. Bookstores are placing it at checkout registers because, as Stahl noted, "it's a good impulse buy."

Army Lt. Col. John A. Nagl, who commands the 1st Battalion, 34th Armor Regiment, at Fort Riley, Kan., said he wished he'd read the guide before his unit deployed to Anbar province in 2003. It's "particularly good on religious customs and courtesies that bedeviled my unit," he wrote in the foreword to the guide.

"As the month of fasting called Ramadan approached in November 2003," he wrote, "I would have appreciated knowing that 'Moslem tempers are very short during this month as your's would be under similar circumstances' and perhaps I would have been better prepared for the surge of violence that marked this celebration."

Nagl photocopies and distributes parts of the guide for soldiers deploying to Iraq. There are other Pentagon primers on Iraq, he said, but "none were as charming and enjoyable as this . . . happy little book. It would be harder to come up with a better read for those going to Iraq. This is a book to help you live among the people," and "that is the strategy Gen. Petraeus is implementing."

And there's practical advice for that time -- and maybe now: "Don't under any circumstances, take a sun bath"; "get used to relieving yourself outdoors [with] your own supply of toilet paper"; and stay away from the mosques.

Other guides, such as last year's Marine Corps "Iraq Culture Smart Card" have a different tone. The "Smart Card" translates key phrases into Arab ones, such as: "Do not move" and "Drop your weapons" and "Lie on your stomach."

The World War II guide, in contrast, tells you how to say: "Please speak slowly," "Where is a restaurant?" and "Please point."

This story has been posted in the following forums: : Headlines; Figures; Kamen; COS - Tunisia; Journalism; Humor; Iraq