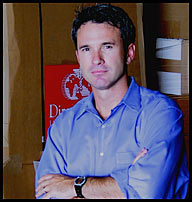 Read and comment on this story from the Seattle Post Intelligencer on Thailand RPCV Thomas Tighe's Direct Relief International and what they are doing to get ready to provide aid in Iraq in the event of war. The objective for DRI is to use the organization's small cash budget to deliver donations overseas to areas of need. In the first nine months of 2002, that meant spending $1.7 million in cash to send $47.5 million of medical equipment and supplies overseas. "We are always looking to meet a need, not to be a solution looking for a problem," said Tighe, 42, who spent more than 14 years with the Peace Corps. Read the story at:

GOLETA -- Imagine the entire population of Ventura County -- more than three-quarters of a million men, women and children -- abandoning their homes and fleeing hundreds of miles across arid desert with nothing more than the food and water they could carry.

Then imagine that same population being subject to the whims of wandering groups of armed men as war rages in the background.

Add another 150,000 people, the equivalent of the city of Oxnard, to the mix.

Now figure out how to provide food, shelter, sanitation and medical care for them -- for days, weeks or even months. According to U.N. projections, a U.S.-led invasion of Iraq could lead to 100,000 dead, wounded or missing, another 2.5 million either refugees or homeless, and 11 million -- half the country's 22 million people -- without food, water or sanitation.

"If the United States does go in, we can expect upwards of 900,000 people going out of the cities and into the countryside," said Katherine Poma, Iraq program officer for Direct Relief International, a California-based humanitarian aid organization.

"There's going to be a huge humanitarian crisis if that happens," said Poma, a nurse and former Peace Corps volunteer. "A lot of the aid agencies are researching, pre-positioning supplies and stockpiles in Jordan and Turkey, and setting up in northern Iraq to aid the Kurds."

DRI, a nonprofit incorporated in 1948, grew from the work of two European refugees, William Zimdin and Denis Karczag, to aid displaced persons amid the chaos of Central Europe after World War II. Since then, the organization has provided medical supplies for war and disaster relief in countries from Afghanistan to Zimbabwe.

In 2002, following the collapse of the Taliban regime in Afghanistan, the organization sent more than $5.2 million in assistance to clinics, hospitals and an orphanage in the Afghan capital of Kabul.

Today, the group's 25 full- and part-time employees are planning similar efforts for Iraq, in concert with other nongovernmental organizations, or NGOs, that include Doctors Without Borders, the Red Cross and the Red Crescent.

"The most likely scenario for us is that we will coordinate with the United Nations, agencies like UNICEF that still have an office in Baghdad and that are functioning," said Thomas Tighe, DRI's director and formerly a senior Peace Corps staff member.

"What we do, typically, is tell everyone on the ground -- the U.N., the NGOs, the U.S. government -- what our capacity is and what our objective is."

The objective for DRI is to use the organization's small cash budget to deliver donations overseas to areas of need. In the first nine months of 2002, that meant spending $1.7 million in cash to send $47.5 million of medical equipment and supplies overseas.

"We are always looking to meet a need, not to be a solution looking for a problem," said Tighe, 42, who spent more than 14 years with the Peace Corps.

The material, ranging from medicine to autoclaves, is donated by American pharmaceutical and medical equipment manufacturers, government agencies and individual and philanthropic donors. The material is all FDA-approved, but comes from overstock, reconditioned equipment or similar sources. Pharmaceuticals that could expire before they can be shipped are donated to local charities.

"It's more than just a job," said Sonny Wirsing, a Ventura resident who helps run DRI's Goleta warehouse. "Helping people in the Third World, in developing countries? It's the most rewarding job I've ever had."

DRI focuses on getting supplies to existing, but underfunded, programs. Using the material supplied by donors, DRI essentially takes "shopping lists" from applicants -- hospitals, clinics and orphanages -- and fills their needs.

"These are trained, ethical, capable people who can provide these services, but they just don't have the resources," said Poma, who has worked in Africa and eastern Europe. "So if we can provide the tools they need, it is much more efficient than trying to do it all ourselves."

DRI consults with U.S. government and international organizations to establish the viability of the institutions seeking help.

"It's no more complicated than getting on the telephone late at night and making lots of calls," Tighe said. "In Afghanistan, I called the U.S. consul in Peshawar (Pakistan) and asked, 'Who knows the most about the refugee situation in Peshawar?' and he gave me the number of the right (NGO), and away we went."

DRI has provided 10 tons of medical supplies to emergency medical teams and existing health facilities in refugee camps along the Afghan-Pakistani border. Eleven air and ocean freight shipments, valued at more than $400,000, were delivered, including antibiotics, stethoscopes, blood-pressure kits and sterilization equipment.

"One of the key things for us to be effective is not to be pulled into the politics of the situation, on one side or the other," Tighe said. "If there are any (U.S.) restrictions (on a given nation), we always seek the approval of the State Department."

Similar efforts were made in 2001, in the aftermath of earthquakes in El Salvador, where some $3 million of supplies was dispatched; in Peru, after a similarly devastating quake, where almost a million dollars of supplies and equipment was sent; and in Gujarat, India, where 38 tons of supplies, valued at more than $3.2 million, were shipped after a quake left 20,000 dead and hundreds of thousands of people injured or homeless.

In response to the Sept. 11, 2001, hijackings and terrorist attacks in New York City, DRI accepted $318,000 in cash donations for disaster relief; all the money was disbursed to victims and their families through Manhattan-based relief groups.

Locally, DRI supports a dental-care program for the poor and uninsured, many of them farm workers in Santa Barbara County. Since 1994, the Healthy Smiles program has provided care to more than 3,000 children and adults. In 2001, the program performed more than $97,000 worth of dental procedures.

In case of a major disaster in the United States, DRI has an agreement with the Federal Emergency Management Agency for FEMA to draw on DRI's stockpile of supplies.

DRI also has a long history of nonemergency relief work overseas, with supplies and equipment going to health-care programs in poor and rural areas throughout Latin America, Africa and Asia.

Among the programs DRI supports are vision care in poor communities in El Salvador, health care in Guatemala, HIV/AIDS hospices in Jamaica, midwife training in Nigeria, hospitals and clinics in Liberia, Ivory Coast and Kenya, rural health and education centers in Thailand, care for leprosy patients in South Korea, hospitals and clinics in Armenia and Bosnia and orphanages in Romania.

"Our focus is always on a specific clinic or program that needs help in a specific way, and in a way our help is not going to be misused," Tighe said. "Our material is only as good as the hands that it ends up in, so we spend a lot of our time trying to identify the best, most credible users."

DRI's program officers spend two months every year overseas, working to identify needs and audit the programs and individuals that receive assistance. Background checks are done with other NGOs, the Peace Corps and service groups, including Rotary International and the Red Cross.

Likely recipients in Iraq will include the Baghdad Children's Hospital, St. Rafael's Hospital in Baghdad, and Relief International, a Los Angeles-based group that works in refugee camps in Kurdistan.

"It's like interviewing people for a job -- you check the references," Tighe said. "There are qualified people we know are there, in-country, who are trained in these specialties and can do the job. ... Our efforts are best spent trying to find those people." More about Peace Corps Volunteers who have served in Thailand

Read more about Peace Corps Volunteers who have served in Thailand at:

This story has been posted in the following forums: : Headlines; COS - Thailand; Service; NGO's

I would like to open a low cost dialysis center in Islamabad, Pakistan.
Please provide the lowest cost possible for one dialysis macine (recondition).
I will hire local medical personnel for this purpose.
Please contact me via e.mail alex5562@aol.com
or you may call me at 817-401-3935.