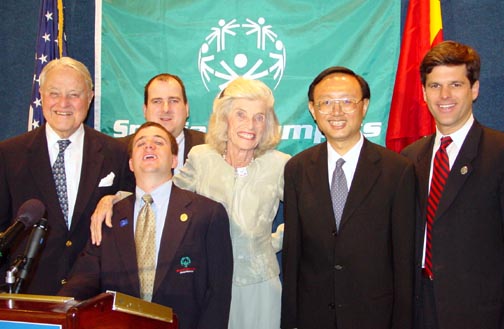 
Read and comment on this story from the Washington Post that, Eunice Kennedy Shriver, wife of Peace Corps Founding Director Sargent Shriver, came out on Wednesday to back her son-in-law, Arnold Schwarzenegger, as California governor -- even though her famous Democratic family has long battled Republicans. "I think he'd be a very good governor. He's been committed to people all his life, since the day he first arrived here, he's been a success with people," Shriver, 82, told reporters before Schwarzenegger met with experts on education policy. Read the story at:

SAN JOSE, Calif. (Reuters) - A Kennedy has finally found a Republican to vote for.


President John F. Kennedy's sister, Eunice Kennedy Shriver, came out on Wednesday to back her son-in-law, Arnold Schwarzenegger, as California governor -- even though her famous Democratic family has long battled Republicans.

"I think he'd be a very good governor. He's been committed to people all his life, since the day he first arrived here, he's been a success with people," Shriver, 82, told reporters before Schwarzenegger met with experts on education policy.

Shriver is the mother of Maria Shriver, Schwarzenegger's television newscaster wife who just this week kicked off solo campaigning for the bodybuilder-turned-actor's run for governor.

"I think he'd be a very good governor because he is interested in all of these kind subjects, particularly subjects that pertain to children," the elder Kennedy said in her first public appearance of the campaign.

Schwarzenegger is running in a special Oct. 7 recall election against Gov. Gray Davis, who is unpopular for his handling of state finances and cool personal style. A second question on the ballot lists 135 replacement candidates.

Davis, however, could get a boost this weekend when former President Bill Clinton makes his first appearance in Los Angeles with the governor on Sunday during a trip aimed at helping beat the recall.

The latest polls show Schwarzenegger trailing Lt. Gov. Cruz Bustamante, a Democrat who is running in defiance of Davis, with whom he does not get along.

CHALLENGE FROM THE RIGHT

Schwarzenegger has also lost Republican support to state Sen. Tom McClintock, who is trailing in the polls but has sparked concern that he could split the Republican vote and hand the election to Bustamante.

McClintock, who has tallied about 15 percent support in the latest polls, has said he has no plans to drop out. Meanwhile Schwarzenegger told reporters he could "absolutely" win even if his fellow Republican stayed in the race.

"But you always want to make it easy for yourself," he said when asked about McClintock.

Any Democratic support could also help the actor erode Bustamante's lead, and education is an issue that may help boost his support with women. He is less popular with women than with men, according to polls.

During the news conference Schwarzenegger, who pointed out he has long been active in educational issues, offered mainly broad proposals to fix an education system he said was failing students in the nation's most populous state.

Main themes included finding ways to give local school districts more control over decisions and convincing qualified teachers to work in inner-city schools. School prayer should be left up to each individual school, Schwarzenegger added.

He also said he was against private-school vouchers but said students should have the choice to change to another public or charter school if their current one was failing.

"We have to stop Sacramento from being the school bully," Schwarzenegger said. "If you leave control with the locals they know what is best to do with the schools."

Schwarzenegger's bid could also receive a boost from popular former Los Angeles Mayor Richard Riordan, who made his first appearance with the actor on the campaign trail. "Arnold is a true leader who likes to learn," said Riordan, who will serve as co-chairman of Schwarzenegger's education team. 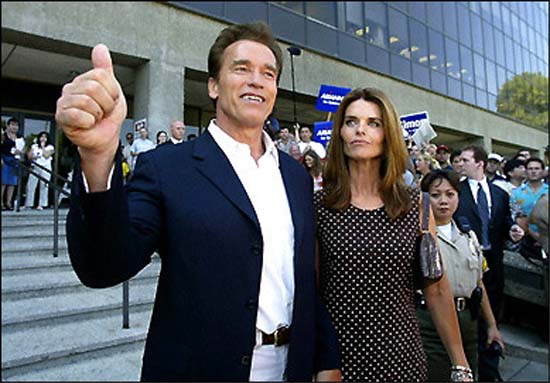 Caption: Actor Arnold Schwarzenegger (L) gives a thumbs up as he is joined by his wife Maria Shriver (C-R) after he filed his declaration of candidacy papers for the California gubernatorial recall election at the Los Angeles County Registrar's Office in Norwalk, California. Maria Shriver is the daughter of Peace Corps Founding Director Sargent Shriver and has a long history of public service, like everyone in her family. (AFP/Hector Mata)


Read and comment on this story from the Boston Globe on August 9, 2003 about Arnold Schwarzenegger's run for governor of California and the attitude of the Kennedy clan towards his canidacy. When Mr. Schwarzenegger married Maria Shriver in 1986, he joined a family dedicated to public service. The patriarch, Sargent Shriver, who served as George McGovern's running mate in the 1972 presidential election, founded the Peace Corps in 1961. He and his wife, Eunice Kennedy Shriver - the younger sister of John F. Kennedy - founded the Special Olympics, which their son Tim now runs. Mark Shriver is the vice-president of Save the Children. Two more sons are involved in other philanthropic ventures. Read the story at:

By SIMON HOUPT
From Saturday's Globe and Mail

Arnold Schwarzenegger's run for governor of California has sent those principles on a high-profile collision course.

So far, the urge to uphold family unity is winning the battle, and few Kennedys are speaking publicly about the matter.

Senator Edward Kennedy issued a statement that read: "I like and respect Arnold, and I've been impressed with his efforts to promote after-school education in California and his willingness to come to Congress and the administration to fight for that program. But I'm a Democrat, and I don't support the recall effort."

When Mr. Schwarzenegger married Maria Shriver in 1986, he joined a family dedicated to public service.

The patriarch, Sargent Shriver, who served as George McGovern's running mate in the 1972 presidential election, founded the Peace Corps in 1961. He and his wife, Eunice Kennedy Shriver - the younger sister of John F. Kennedy - founded the Special Olympics, which their son Tim now runs. Mark Shriver is the vice-president of Save the Children. Two more sons are involved in other philanthropic ventures.

The silence that has descended upon the clan suggests the Kennedys may see Mr. Schwarzenegger's bid as a smirch on their good name.

Michael Shriver would not comment yesterday, though he told The Washington Post earlier: "I'm not talking. He [Mr. Schwarzenegger] is my brother-in-law and I'm supporting him and that's all."

While they are usually voluble over the accomplishments of family members, they refrain from speaking when confronted with scandal, such as the rape accusation against William Kennedy Smith in the spring of 1991 and Michael Kennedy's affair with an underage babysitter that came to light in 1997.

In a February, 2002, on-line chat to promote his movie Collateral Damage, Mr. Schwarzenegger praised his father-in-law as a "powerful force to get those programs done. 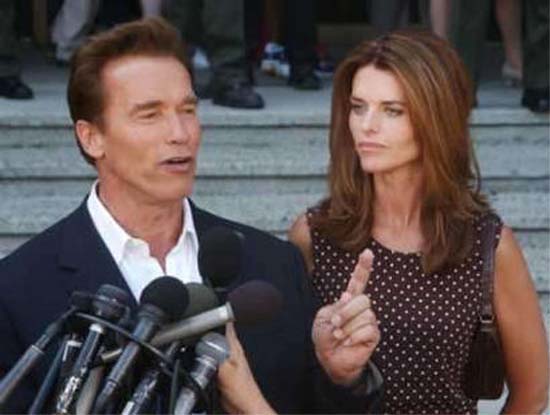 Alongside his wife Maria Shriver, actor Arnold Schwarzenegger speaks to reporters after he filed his candidate papers for governor of California at the Los Angeles Registrar's office in Norwalk, August 9, 2003. Schwarzenegger made his candidacy official, telling chanting supporters he would be 'the people's governor.' The Austrian-born action film star and political novice, a Republican, has quickly come to be regarded as the front-runner in the October 7 election to replace the unpopular Democrat Gray Davis. Photo by Jim Ruymen/Reuters

Naturally, when you meet people like that and they have such a great political background and know so much about it, you learn a lot from it."

He added: "I think, you know, I had an interest in giving back to the country anyway. But I think that being with this family definitely has a very big impact on me."

Still, Laurence Leamer, the author of two Kennedy biographies including the forthcoming Sons of Camelot, said of Mr. Schwarzenegger's bid: "This wasn't the Kennedy family getting together in a council and deciding who's going to run next, that's for sure."

But Mr. Leamer pointed out that there are many political stripes on the Kennedy tiger.

"If you look at the political spectrum of the Kennedys, you go on the right from Doug Kennedy, who's a libertarian, to Ted Kennedy on the left, who's a liberal Democrat - and actually Arnold is right in the middle of that as a liberal Republican."

And despite his official party affiliation, Mr. Schwarzenegger may not be too different from his in-laws.

A March, 2001, article in Premiere magazine included various accounts of the star groping women while making and promoting his films.

The article's primary allegation was that the Terminator actor was able to use his power in Hollywood to terminate negative press. No longer.

Yesterday, as Mr. Schwarzenegger faced tough questions during his first TV interviews with journalists rather than talk-show hosts, he looked out of his depth.

He was unable to offer specific ideas for rescuing the California economy except to suggest that leadership is needed.

"Leadership means that you set goals for yourself, as I have always done in my life, go after those goals and accomplish them," he said during an interview with Matt Lauer on the Today Show.

Asked twice by Mr. Lauer whether he would release his tax returns to the press, Mr. Schwarzenegger said he was unable to hear the question.

He said the same thing when asked for his position on California's controversial law regarding paid family leave, against which some businesses have protested for its cost to their bottom lines.

When Mr. Lauer repeated the question, Mr. Schwarzenegger hesitantly said he would have to think about the issue.

is arnold really wanting to run or is this all just because he loves his wife i know he wants to do this because he is doing it and winning so it shows he has somee passion for this election other wis he wouldnt be doing this but i dont think he is 100% up to this responsability oh and when was the last time he went to my home town sunvalley just wondering???