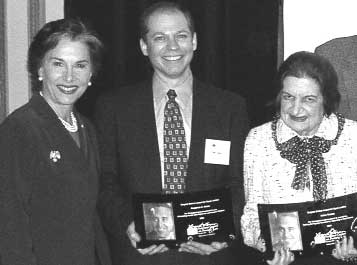 The Sargent Shriver National Center on Poverty Law held its 7th annual benefit and awards dinner in December to celebrate individuals who have worked tirelessly on behalf of the underserved and underrepresented.

Thomas has covered the presidency for 44 years. She was UPI’s White House Correspondent and the first woman to hold positions in the White House Correspondents’ Association and the National Press Club. She received the Equal Justice Award for her leadership in addressing the complex issues of social justice. Her acceptance speech was witty, but also critical of the current administration. Thomas referred to the members of president Bush’s cabinet as his “clones” and said, “the litmus test is conformity.” Speaking about the war in Iraq, she characterized it as “illegal and immoral.” Finally, Thomas was also disappointed in her own profession, declaring that, “The White House press corps is beginning to come out of its coma.”

Cohen represented a class of 600,000 children in a case against the state of Illinois for its administration of the Medicaid Act. On a pro bono basis, he was co-lead counsel and won a landmark victory.

Morial has increased the profile and diversified the constituencies of the National Urban League, a community-based organization that serves over two million people. The former mayor of New Orleans ( 1994-2002 ) also writes a weekly newspaper column entitled “To Be Equal.”

This story has been posted in the following forums: : Headlines; Directors - Shriver; Awards; Poverty; Law; Journalism