Julie Berry, accepted into the Peace Corps, is California-bound after reality show 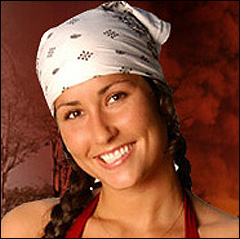 Julie Berry, accepted into the Peace Corps, is California-bound after reality show

PORTLAND, Maine — She didn´t win the $1 million top prize, but her 39 days on a South Pacific island made her a national TV star.

And now that she´s been voted off the CBS reality show "Survivor," Julie Berry of Gorham is looking to the future.

Berry, 23, won´t say how much money she won on the show, but it´s apparently enough to allow her to move to California and not work for a while.

"Everyone gets some money, and you get more the longer you stay on," she told the Portland Press Herald on Friday. "But I really liked the whole adventure of it, the challenge, relating to people."

Will Berry attempt to parlay her "Survivor" fame into other show biz opportunities?

"Some things have come up, and I´m definitely open to things, but I´m not trying to create a life like that," she said. She wouldn´t specify what "things" had come up.

Of the original 18 contestants, she made it to the eleventh of 12 weekly episodes before being voted off by the remaining four survivors Thursday night. The finale will be broadcast Sunday night.

On "Survivor" Berry and her fellow castaways had to forage for food and shelter on the South Pacific island nation of Vanuatu, while competing in physical and mental contests.

She said the finished episodes didn´t convey how hard the survival part of the show actually was. Berry said she ate mostly roots, lost 15 pounds, and endured 50-degree nights in nothing but a tank top and bathing suit or shorts.

When Berry got to eat some real food in her final episode, she downed seven foot-long hot dogs.

Berry knew in August when she´d be voted off, but was obligated by CBS not tell anyone until the episode aired. Not even her parents, who watched with neighbors in the living room of their Gorham home.

Berry, a graduate of Gorham High School and East Carolina University, was waiting for a Peace Corps assignment when she sent in a home-made audition tape to "Survivor."

She said she still hopes to go to graduate school for a master´s degree in marriage counseling and family therapy. But she´s putting those plans on hold for at least a year.

©Copyright 2004 Associated Press. All rights reserved. This material may not be published, broadcast, rewritten, or redistributed.

This story has been posted in the following forums: : Headlines; Television; Adventure