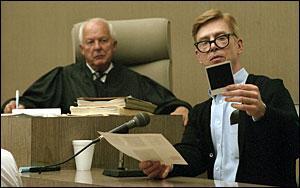 After years of failed appeals, his fight for release received its most significant boost when the state crime lab reported recent DNA test results. They exclude him from saliva found on cigarette butts recovered from several rooms in the farmhouse--the only physical evidence the state had to link Jerry Mark to the crime scene.

After stints in the Peace Corps in Brazil and as a legal-aid lawyer, Jerry Mark moved to Berkeley, Calif., and soon immersed himself in the radical left and the city's counterculture. He and his girlfriend lived just blocks from where the Symbionese Liberation Army kidnapped newspaper heiress Patty Hearst in 1974. "It was an exciting, scary, wonderful time," Mark recalled.

Caption: Jerry Mark is shown testifying during a hearing in 1994 on whether to grant him a new murder trial. The motion was denied. At left is Senior Judge L.D. Lybbert. Courier File Photo

CEDAR FALLS, Iowa -- In the days after Dorothy Mark found her son, daughter-in-law and their two children murdered, neighbor after neighbor came to her bearing casseroles, pies and assurances.

No matter what police suspected, they said, there was no way Jerry Mark, one of her three surviving sons, could have broken into the family farmhouse under the cover of a harvest night in 1975 and committed what remains one of Iowa's most notorious crimes.

But the sympathy soon curdled into something darker. Folks began coming to her door with uglier messages, like how vigilantes would shoot Jerry if he showed himself in public.

"It was not a vindictive thing," she said one recent evening, sifting through family photographs. "They were just scared out of their holy skins."

Nearly three decades after Jerry Mark, a former Peace Corps volunteer and self-described hippie lawyer, was convicted of the slayings, the fear that choked this college town and farming community is gone. But the case refuses to go away.

After years of failed appeals, his fight for release received its most significant boost when the state crime lab reported recent DNA test results. They exclude him from saliva found on cigarette butts recovered from several rooms in the farmhouse--the only physical evidence the state had to link Jerry Mark to the crime scene.

Recent advances in forensic science also have undermined other elements of a prosecution that always was circumstantial. Last month, the FBI disclosed that a key discipline used to convict Mark--bullet-lead analysis--was so flawed that it has stopped using it.

Still, the Iowa case serves as a reminder that even DNA's famous precision can leave questions unanswered.

Just because Mark's genetic profile was not found on crucial physical evidence, does that negate the suspicious actions that led to his arrest and conviction?

Compelling evidence remains that Mark, now a 62-year-old grandfather being held at the state prison in Ft. Madison, killed his brother Les, Les' wife, Jorjean, and their children in an alleged dispute over the family farm.

Not only did he lie to investigators about a motorcycle trip he took around the time of the murders, but he also bought a box of bullets in California whose uncommon round--.38 Long Colt--matched bullets found at the crime scene.

As Mark put it in late February at the prison: "Here's why I got convicted. I lied to the cops, and I bought the bullets."

The case shows that some doubts never can be purged. This one may always be seen through starkly different prisms--one of circumstantial evidence, the other of forensics.

Prosecutors had a tidy explanation for the bloody scene that Dorothy Mark and her neighbors stumbled upon at dawn on Nov. 1, 1975. Jerry and Les Mark, they reasoned, were akin to the biblical brothers Cain and Abel, with the bad son of Adam and Eve slaying the good son.

For prosecutors and jurors, it wasn't a stretch. After stints in the Peace Corps in Brazil and as a legal-aid lawyer, Jerry Mark moved to Berkeley, Calif., and soon immersed himself in the radical left and the city's counterculture.

He and his girlfriend lived just blocks from where the Symbionese Liberation Army kidnapped newspaper heiress Patty Hearst in 1974.

"It was an exciting, scary, wonderful time," Mark recalled.

By contrast, Les Mark, who was seven years younger than Jerry, had stayed home in Iowa to farm the family's 1,200 acres of corn and soybeans. He married Jorjean Colthurst, his college sweetheart at the University of Northern Iowa in Cedar Falls, and had two children.

Not long before the murders, the couple took over the family farm from the brothers' ailing father, Wayne, settling into the 17-room house that had been in the Mark clan for generations.

The move was central to prosecutor David Dutton's theory of the crime. Invoking the jealousy that led Cain to kill Abel, Dutton asserted at Jerry's trial that he had told a friend in California: "My little brother screwed me out of my farm."

To this day, Jerry Mark maintains his innocence and says he always loved Les and Les' children. But some powerful circumstantial evidence is difficult to ignore.

In the days before the murders, Mark left his apartment in Berkeley for a road trip on his newly purchased Honda motorcycle. He and prosecution witnesses disagreed on just how close to Cedar Falls he ended up, but the timing of his long-distance trip east remains suspicious.

When a police officer questioned him after the murders, he lied about his route. He now says he did so to keep his girlfriend from finding out that he had picked up a hitchhiker on the way out of Berkeley, had sex with her and dropped her off in Wyoming, instead of driving to Southern California as he had told his girlfriend.

Checking pay-phone records, investigators soon discovered the lie. They became even more suspicious when they found out that he had purchased 50 rounds of .38 Long Colt ammunition, a relatively rare brand, at a California gun shop less than a month before the murders.

In the recent interview, Mark said he was interested at the time in writing a book about the radical left and that he bought the bullets in an attempt to ingratiate himself with a man who claimed to have connections to the Weather Underground, a violent group opposed to the U.S. government.

The murder weapon and the bullets Mark bought were never found.

"It was totally out of character for me to buy bullets," he said. "That's why it looked terrible."

That gave his defense lawyers, including former Iowa Atty. Gen. Lawrence Scalise, a challenging task. Fully explaining his life and his flirtation with violent left-wing politics, Mark noted, "would have made me look worse to Iowans," specifically the 12 jurors who weighed his fate.

Plenty of people connected to the case remain convinced of Mark's guilt, including the maternal grandfather of 5-year-old Julie and 18-month-old Jeff, George Colthurst, who raises livestock in Ainsworth, Iowa.

Pointing to a photo of Julie and her brother taken at a Halloween party hours before they were murdered, Colthurst paused.

Ever since the trial, Colthurst added, he doesn't mind paying taxes because authorities "did a wonderful job of convicting him on circumstantial evidence."

For precisely that reason, others remain unconvinced of Jerry Mark's guilt, including the funeral director who hoisted the bodies into hearses.

"They never really did get him on the site," said Don Richardson, who was called to the farmhouse that morning. While Mark's suspiciously timed motorcycle trip still gives him pause, Richardson said, "I don't think the case has been solved."

In recent months, revelations about the forensic evidence at the center of the prosecution have bolstered such doubts.

At Mark's 1976 trial, authorities used available methods to test the saliva on cigarette butts found inside the farmhouse, indicating he had the same blood type as whoever had smoked the cigarettes.

After the advent of DNA technology, Mark requested testing on the butts. Late last year, the Iowa state crime lab reported that he "was eliminated as the source of the DNA" on the cigarettes.

The state has dismissed the significance of the test results, pointing to the other evidence at the trial. But Mark's attorney, Paul Rosenberg, disagrees.

"At this point, their most persuasive evidence is simply not true," Rosenberg said. "Those weren't his cigarette butts."

Doubts also have been raised about another central piece of physical evidence in the case: .38-caliber bullets taken from the bodies of Les and Jorjean Mark and found in their children's rooms.

An FBI bullet-lead expert testified for the state that the recovered bullets matched the lead composition of those police purchased from the same California gun shop Mark had visited--strongly implying that the crime-scene bullets were from the same shop.

Such testimony commonly has been used in American courts. But last month, the FBI divulged that it had suspended the use of comparative bullet lead analysis following a National Research Council report that discovered fundamental flaws in the 4-decade-old technique. The council found no evidence to support the belief that bullets with similar chemical compositions are from the same source.

At the Tribune's request, a former FBI expert reviewed the testimony of the prosecution's bullet-lead examiner in the Mark trial. William Tobin, a leading critic of bullet-lead analysis, said the testimony was typical for such flawed comparisons.

"This is akin to taking two blood samples from two separate individuals, noting that they have the same levels of cholesterol in the blood and then extrapolating that the individuals came from the same parent," said Tobin, a private forensic consultant.

Perhaps more questionable was testimony that connected Mark to shoeprints in the dirt outside the house. Though police never linked a specific pair of shoes to Mark, two local podiatrists testified that their analysis of his gait suggested he made those shoeprints.

Since the trial, such analysis has been widely debunked.

The revelations have prompted Mark's lawyers to raise questions about the fairness of the trial and other forensic evidence in the case, including a used condom found in Les and Jorjean's bedroom.

Rosenberg and Mark's appellate attorney, Jim Cleary, want semen in the condom tested, a step prosecutors oppose. If the genetic profile matches neither Les nor Jerry Mark, yet more questions would be raised about the case. A federal judge is expected to decide soon whether to order the condom tested or send the issue back to state court.

One of the jurors who convicted Jerry Mark welcomed the fresh scrutiny.

"If something turns up that he didn't do it, well, more power to him," said Sara Agostine, who at the time worked in the catalogue department at Sears, Roebuck and Co. in Sioux City, where the trial was moved.

But Agostine never has been bothered by doubts over the jury's decision. In particular she was convinced by marks on his motorcycle, which prosecutors wheeled into the courtroom to argue that Mark had disconnected the odometer to throw off investigators.

There also was a letter found at the farmhouse, sent from Jerry Mark to Les. In it, Jerry wrote that he had no hard feelings about his brother inheriting the farm.

"I thought that was a put-up. He planted that there so it would be found and take the guilt away from him," Agostine said. "I still think he's guilty."

As for Dorothy Mark, she believes her son is innocent.

Besides, she said, "Jerry is lawyer-trained. He is a very smart individual." Too smart, she added, for his own good.

This story has been posted in the following forums: : Headlines; Crime; DNA; Justice