Korea RPCV David L. Dolinger was an eyewitness to the Gwangju Democratic Uprising in May 1980 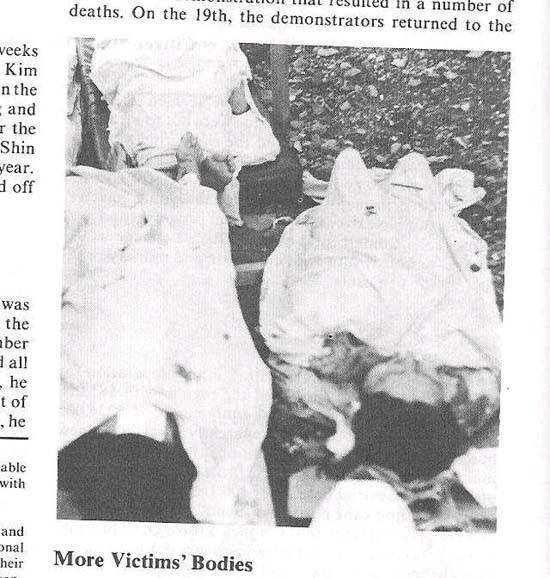 "During the Gwangju Incident I was able to talk with the soldiers involved. They stated that the reason that they were doing what they were doing, the violence, killing and mistreatment of the citizens was that they were ordered to and that those involved were all communists. They did not admit to being starved or given drugs. From a source that worked for the Korean army I was told that a number of the officers used in the final assault on the city were from the Cholla Provinces. They were used because they had to prove their loyalty to the government and it was assumed that they would be harder on their own people."

Korea RPCV David L. Dolinger was an eyewitness to the Gwangju Democratic Uprising in May 1980

As a participant in the Gwangju Democatic Uprising and having been invloved in groups based here in the US to bring the truth to light I am providing you with some of my materials. Included testtimony that I provided when I return to the US in July of 1981 as well as three surviving photos that I took during the uprising.

It is now time for me to reactivate my life.

This testimony was originally provide to the International Human Rights Law Group in 1981 as a hand written brief summary of my experiences in Gwangju during the May 1980 Gwangju Incident. I have subsequently edited and added as I have had time to reflect on what I observed.

May I first say that all information contained within this document are facts that I observed first hand.

I first came to south Korea on April 21, 1978 as a member of the United States Peace Corps. Upon arrival I received ten weeks of intensive language and cross culture training. In Chungju the provincial capital of south ChungCheong Province, I was sworn in as a Peace Corps Volunteer on June 29, 1978. On July 6 I began my duties as tuberculosis control worker in South Cholla province, at the Yeongam County Health Center, (Yeongam being located 56-Km southwest of Gwangju). I was a volunteer in Yeongam until June 11, 1980 when I was told by the Peace Corps country director to submit a letter asking for early completion of service (I should have completed on June 30, 1981, 1981 because I had been grant a one year extention of service).

On May 15, 1980 the students throughout Korea had agreed to return to the campuses and to stop demonstrating. This was a result of an appeal made jointly by Kim Dae Jung and Kim Jong Pil. The cities throughout Korea were quiet Friday May 16. The night of May 16 the people of Gwangju (approximately 2000 people) held a candle light march from Gwangju Railroad Station to the Medical School of Chonnam University to show the wish for democracy. The march was very peaceful and orderly. The police marched at the sides of the marchers.


Saturday was again quiet, and the atmosphere of the city was relaxed; people were hoping for the best. That night martial law was declared and numerous leaders were arrested. The people of Gwangju and Koea awoke Sunday May 18th not knowing what had happened only knowing that the hope they had was no longer real.

That morning when Chonnam students attempted to enter the campus martial law soldiers denied them access. The students who did gain access were physically removed often with parts of their clothing remaining on campus. This happened to male and female students; soldiers attempting to remove them often ripped at the student’s shirts ripping them from the student’s backs.

Because the students were denied access to their campus (which by law the soldiers were not allowed to enter) they started to mass at a market in Dae In Dong. This spurred by the information that a student had been bayoneted to death while trying to enter the campus. I did not witness the bayoneting but was told by numerous students that it had happened. Because of these facts and others (declaration of martial law and the arrest of Kim Dae Jung) the students decided to protest and let the city and government know how they felt.

At approximately 12:30 about 200 students came marching out of an alley in Dae In Dong. Marching towards Geum Nam Ro, the major street of Gwangju that runs to the front of the Provincial Office Buildings. As they marched they chanted the “Chun Doo Hwan must resign” and “Kim Dae Jung must be released”. At Geum Nam Ro the protestors faced off with the martial law troops. At first it appeared that there would be no violence.

Then for no discernable reason the martial law troops started shouting at the students and the crowd of onlookers. At this time the martial law troops commanded Geum nam Ro with the marchers and onlookers situated in the side streets and the sidewalk. The students then picked up stones from a construction site (the city was building and underground shopping mall under Geum Nam Ro) and started to throw them at the troops. The troops continued to taunt the protestors by running out from their ranks and waving their hands and shouting. It appeared that they were being ordered by the officers to do this.

Then without warning the troops attacked in unison. The troops used their truncheons to attack the protestors as well as the onlookers and anyone else that they caught. The troops even followed people into stores where they would hit everyone and if they found young men drag them into the streets where they were beaten again and forced on to trucks. The beating appeared to be indiscriminant.

Those people that the troops decided to hold / arrest (those usually the most severely injured) were forced into the middle of Geum Nam Ro where they were forced on to trucks. If they slowed at all they were beaten. Some had to be thrown on to the trucks, as they appeared to be un-conscience. Some head their heads split open and were bleeding profusely. By about 3:00 the worst of it was over. The troops were back in the middle of Geum Nam Ro and very few people were about. Curfew had been set at 9:00 p.m..

Monday morning I returned to Yeoungam to work at the Health Center and did not return to Gwangju until May 21st, Buddha’s birthday. In the late evening of May 20th contact with Gwangju was cut. I found this out from my co-workers. The morning of May 21st all public transportation to Gwangju was stopped. I was able to catch a bus to Naju and from Naju walked to Gwangju. It took about 4 hours to walk the 24-Km.

I arrived on the outskirts of Gwangju at about 3:30 p.m. where I met a person that I knew. Together we walked downtown. Along the way we saw the body of a man who had been shot in the chest. His body was on the hood of a military jeep for all to see what the martial law troops were doing. To show the citizens of Gwangju the death and the horror that they were hearing about were real.

As we neared downtown I heard a helicopter approaching, with its approaching sound I saw the people in the streets running for cover. I was told that they, the troops had flying over since the morning and shooting into any crowds that they spotted. I then saw it for myself. As the helicopter flew over downtown I saw a soldier lean out of the side door and fire his gun. On Thursday I would visit the major hospitals where I would se those wound by the fire from the helicopters. All had wounds of the upper torso with the projectile’s trajectory going downwards.

When I reached downtown I saw the side streets of Geum Nam Ro jammed with people. The martial law troops were massed in front of the Provincial Office Building.

At around 5:30 p.m. I returned downtown from where I was staying (approximately a five-minute walk). On the way I was directed to a private clinic where I saw three young men in the treatment room. They were suffering from gunshot and bayonet wounds. One patient had three bayonet wounds, two to his chest and one to his arm.

From Geum Nam Ro sporatic gunfire could be heard. As I neared I saw that the people were no longer venturing on to Geum Nam Ro but were huddled in the side streets peering around the edges of the buildings. When I peered around the corner I saw a tank parked in front of the Gwangju Bank opposite of the CheIl Bank. The troops were also shooting up the street so as to keep everyone off of Geum Nam Ro. In addition, the machine gun on the tank was being fired. The gunfire was sporadic and did not seem to be directed at anyone.

When I took some pictures of the tanks and the citizens I was asked to stop by one of the student leaders. It seems that earlier in the spring pictures from protests in Pusan had been used to identify and then arrest protestors and student leaders. So from that point on I did not take any pictures.

That night the troops withdrew from their position at the Provincial Office Building. The citizens of Gwangju were in control of their city.

Thursday was a day of happiness, but also of worry, pain and sorrow but most of all a day of organizing. From Thursday, May 22nd until Monday May 27th I spent my time visiting the hospitals, translating for foreign reporters and in the Provincial Office Building with those people who were deeply involved and committed to what was going on.

When the soldiers retook the city I counted 14 tanks, 4 armored personnel carriers and 1 flamethrower being carried by a soldier in the Provincial Office building.

During the Gwangju Incident I was able to talk with the soldiers involved. They stated that the reason that they were doing what they were doing, the violence, killing and mistreatment of the citizens was that they were ordered to and that those involved were all communists. They did not admit to being starved or given drugs. From a source that worked for the Korean army I was told that a number of the officers used in the final assault on the city were from the Cholla Provinces. They were used because they had to prove their loyalty to the government and it was assumed that they would be harder on their own people.

Based upon my own observations and information from the citizens involved in the organization of the city and the negotiations with the martial law troops I estimate that the number of dead is between 1000 and 1500. But this number is very hard to determine as the soldiers took away large numbers of people and bodies. Of those that I know died the ages ranged form 4 years old to 67 years old, male, female, student and worker. While the citizens controlled the city they place 67 caskets in the police gymnasium for a mass memorial.

Let it be known that the citizens planned to bury those 67 persons on Sunday May 25th, but the martial law troops would not allow it. One of the demands of the martial law command was that all bodies were to be retained for autopsy. Because of that demand some of the dead of Gwangju were not buried when they should have been according to Korean custom.

Let it also be known that the citizens committee wanted a peaceful settlement. But they knew that the soldiers would attack and that their lives would be sacrificed.


When this story was posted in November 2005, this was on the front page of PCOL:

This story has been posted in the following forums: : Headlines; COS - Korea; Human Rights