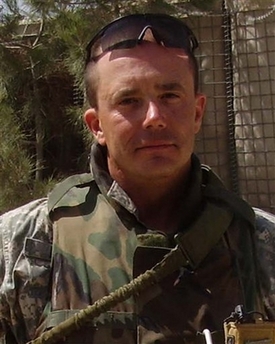 More than 150 people filled The Dalles Wahtonka High School auditorium, greeted by bagpipes on a wet, dreary Sunday afternoon, to praise the Oregon transplant who wore Tevas outdoor sandals to his wedding and spent two years in the Peace Corps.

THE DALLES -- Friends, politicians and family remembered a fallen soldier Sunday as a man who worked for peace in a military uniform and made them laugh with his cutting humor.

Staff Sgt. Robert J. Paul, 43, died Sept. 8 in Kabul, Afghanistan, when a vehicle bomb exploded near his armored Humvee during a patrol. Another soldier also was killed.

More than 150 people filled The Dalles Wahtonka High School auditorium, greeted by bagpipes on a wet, dreary Sunday afternoon, to praise the Oregon transplant who wore Tevas outdoor sandals to his wedding and spent two years in the Peace Corps.

Gov. Ted Kulongoski praised Paul for being a man of peace, not just a man of war.

As a civil affairs officer, his job was to help improve the infrastructure and quality of life of the Afghans.

Quoting a second-century rabbi, Kulongoski asked, "Who is a hero? He who turns an enemy into a friend. (Paul) did all he could to turn enemies into friends and to keep friends from becoming enemies."

For some, it was hard to see how two years in the Peace Corps meshed with a military career, but Paul saw how they fit, said U.S. Rep. Greg Walden, R-Ore.

The community building work Paul did in Kenya in the 1980s taught him skills that directly applied to his efforts in both Iraq and Afghanistan. He joined the Army Reserve in April 1997.

Unlike some soldiers, Paul made an effort to shop in local stores and eat at local restaurants during his service, friends noted. As a Peace Corps volunteer, he lived and worked with the people he wanted to help. When he died, he was carrying $800 to buy false teeth for the mayor of an Afghan town, Walden said.

Paul grew up in the Midwest, outside of Chicago, graduating from the University of Illinois at Urbana-Champaign. After college, he wasn't sure what he wanted to do, his mother, Esther Paul, said. For a time, he sped through the streets of downtown Chicago as a bike messenger. He joined the Peace Corps without telling her. He met his wife, Bonnie, in Washington, D.C., where he earned a master's in urban planning and economic development at the University of Maryland.

fter they moved to Oregon, he raved about his adopted home state as "God's country," his mother said, telling her, "I will never, ever leave Oregon."

Staff Sgt. Robert Paul was the 73rd member of the military with ties to Oregon or Southwest Washington to die in Iraq or Afghanistan. Paul was part of the 364th Civil Affairs Brigade, based in Portland.

Todd Cornett, friend and director of planning for Wasco County, hiked with Paul, noting he had plenty of scrapes and bruises to show for it. Paul's sarcastic humor meant he rarely missed opportunities to joke.

"This is my way of giving him one more chance to do it," Cornett said before reading a Robert Frost poem.

In a shaky voice, Paul's mom, Esther, talked about his love of movies. He would even keep a movie-appropriate box of hats at home, donning a cowboy hat during Westerns, for example.

His mother called him an average child who learned early a love of languages, insisting on taking German in eighth grade although his adviser thought it would be too tough. He later learned Swahili and studied Asian languages.

She didn't want him to go to Afghanistan, but understood that "Bobby was where he wanted to be and was doing what he wanted to do."

She thanked his friends and the military for sending cards and condolences. One, especially, stuck with her. It was a card from a friend who knew the family when Bobby Paul was just 3 months old.

Esther Paul paused as she looked out from the flag-strewn stage.

"That's how I'm going to remember him."

Staff Sgt. Robert Paul's survivors include daughter, Ilena; mother and father Esther and Sheldon; and sisters, Monica and Debra. Paul and his wife, Bonnie, divorced in 2004.

This story has been posted in the following forums: : Headlines; COS - Kenya; COS - Afghanistan; Obituaries; Military; Civil Affairs