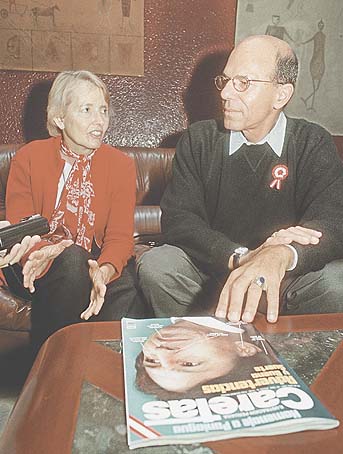 Nancy Meister and her ex-husband, Joel, may be among the most successful Peace Corps volunteers in the agency's history. Were it not for them, Alejandro Toledo would never have been elected president of Peru in 2001. Says David Arnold, editor of the magazine published by the National Peace Corps Association: "I cannot think of anyone whose personal friendship and long-time support for an individual has had such a profound influence as Nancy and Joel Meister, not only on an individual career but on the leadership of a nation."

LIMA, Peru -- President Alejandro Toledo hosted Defense Secretary Donald Rumsfeld earlier in the day and has just has gotten off the phone with the president of Brazil.

He has at best an hour to talk, he tells the woman visiting from Tucson as she sits down to his left. He is scheduled to have dinner that evening at the Brazilian Embassy with foreign ambassadors, important businessmen and powerful politicians.

They begin to talk. Soon, Toledo is pacing about his office as he remembers stories and events from 40 years ago, when he was a teenager with ambition but no opportunities--until he met this woman and her boyfriend.

He stops, leans over and hugs the woman.

Then he picks up the phone. "Cancel my dinner," he says. "I'm going to eat here."

Toledo looks up. "The ambassador I can see any day," he says. "I can't see you every day."

Simply put, Nancy Meister and her ex-husband, Joel, may have been the most successful Peace Corps volunteers in the program's history. Were it not for them, Toledo undoubtedly would never have been elected president of Peru in 2001. Says David Arnold, editor of the magazine published by the National Peace Corps Association: "I cannot think of anyone whose personal friendship and long-time support for an individual has had such a profound influence as Nancy and Joel Meister, not only on an individual career but on the leadership of a nation."

They met Toledo 41 years ago. Nancy Deeds and Joel Meister had come to Peru a week earlier as members of the newly formed Peace Corps. They were assigned to Chimbote, a squalid coastal city that reeked of fish meal, and were looking in a shantytown for a place where Nancy could live.

Several families had already rejected them when they happened upon a humble concrete dwelling. A teenager wearing a white short-sleeve shirt and dark pants greeted them. He listened to their request and went inside to seek his mother's approval.

It was a chance meeting that would change history.

Alejandro Toledo explained to his mother that the gringos had come to assist poor Peruvians like themselves. Their house already had nine people living in three rooms, he acknowledged, but Nancy could occupy "la tiendita," the tiny room fronting the street where Mrs. Toledo sold vegetables and fruits to earn a few extra dollars. Nancy could pay more in rent than Mrs. Toledo earned, Alejandro figured. She gave her assent, and then got her husband's blessing.

Nancy's new home sat on a dirt street where neighborhood dogs ran wild. The home had no electricity or running water. Guinea pigs frequently occupied the kitchen. Behind the dirt backyard was an open trench that contained the neighborhood's raw sewage. Fresh water came from a well 50 yards away.

The Toledos had moved to Chimbote a dozen years earlier from the mountains. Like millions of Peruvians who had moved to urban areas, they were hoping for a better future. In their new home, Mr. Toledo made bricks for a living, in the backyard. Joel found a place to live two blocks away.

"Maybe, hidden, I wanted to have friends to learn English," President Toledo tells Nancy, as they sit in the presidential palace and recall the day they met. He adds that he probably thought they could be the ticket out of the dead-end life that typically swallowed Chimbote's youth. Alejandro was one of 16 children, only nine of whom would survive infant sicknesses.

Nancy and Joel began assisting Alejandro with a youth group that he headed. By kerosene lamp in her tiny room, he and Nancy also had long talks about politics and society. "There's no doubt that I woke up and said, 'Maybe I can go somewhere,'" Toledo remembers.

A year after arriving, Nancy and Joel got married in Chimbote. Mr. and Mrs. Toledo stood in for their parents.

In June 1965, the Meisters returned to the United States for graduate studies at the University of California at Berkeley.

Three months later, Toledo turned to them for help. He had won a small scholarship to study in the United States. They agreed to help after he promised that he would return to Peru some day. They got him enrolled at the University of San Francisco, lent him money and housed him until he could find his own place to live. In 1970, they attended his graduation.

Toledo went on to Stanford, where he ended up getting two master's degrees and a doctorate. It was at Stanford that he met his wife, Eliane Karp, a Belgian linguistics student.

The Meisters ended up in the northeast, where they raised three children while Joel taught and Nancy was employed as a social worker.

In 1983, wanting to return to the West, they moved to Tucson. She got a job at the University Medical Center working with cancer patients. He began work at the Rural Health Office.

They stayed in touch with Toledo over the years as he worked for various international organizations and taught at Harvard. He visited them one time in Tucson, for Thanksgiving and to teach a seminar at the Rural Health Office. They visited him in Peru in 1997.

Meanwhile, Toledo secretly nourished a dream that one day he would be elected president of Peru, to create better lives for the poor. Few people gave him a chance when he ran in 2000 against President Alberto Fujimori, who was using an iron fist and bribes to retain power with the economy in recession. But using the tenacity and street smarts that had propelled him out of Peru, Toledo came from last in the polls to narrowly lose to Fujimori. Toledo won the presidency a year later, however, after Fujimori resigned amidst a corruption scandal and called new elections.

At his 2001 inauguration, Toledo gave royal-carpet treatment to Joel and Nancy, who were now divorced but remained friendly.

In his four years in office, Toledo has presided over one of the strongest economic rebounds in Latin America. But traps created by Fujimori's followers and self-inflicted wounds by the politically inexperienced president have left him with an approval rating below 20 percent over the past two years. Every move Toledo makes gets heavy criticism.

"I'm concerned about you," Nancy, 63, tells the 59-year-old president as she greeted him last month, as he sagged in his chair. "You should rest a bit."

As the president steps out of the room for a moment, she leans over and tells another visitor, "He's aged a lot since September" when she saw him last.

After Toledo returns, he and Nancy light up remembering their time together in Chimbote, and subsequent visits over the years.

Toledo laughs uproariously as he tells the story of a Swiss family that took him on as a boarder shortly after his arrival in San Francisco, at Joel and Nancy's recommendation, in exchange for him cooking and cleaning. They fired him, Toledo recalls, when he short-circuited the toaster and the vacuum cleaner. They yelled at Joel and Nancy for having brought an ignorant Peruvian to them.

Years later, Toledo adds with glee, he bumped into the man at a restaurant and told him that he was now teaching at Harvard. "He was absolutely shocked," Toledo says.

By now, Toledo is having too much fun taking a break from the pressures of his job. He begs out of the dinner at the Brazilian Embassy and leads Nancy to his private dining room in the presidential palace.

He takes off his coat and tie. Everyone orders a drink from a white-jacketed waiter.

Nancy tells him about having gone to his home the day before--Toledo has chosen not to live at the presidential palace--to visit with the president's 93-year-old father and his 23-year-old daughter. Toledo's father has two photos of Joel and Nancy on his bedroom wall. One was taken on their wedding day, the other on their 1997 visit to Peru.

"They are great, great human beings," Toledo says of them at one point during the dinner.

Near midnight, the president reluctantly says he must end the evening because he has to inaugurate a project in the mountains the next day.

He and Nancy hug. He gets into the backseat of his car to head home. Nancy gets into another car. She is staying nearby where he lives. Toledo has her vehicle join the presidential motorcade.

"When I stop and think: My God, look where he's come from, it seems so fantastic," Nancy says the next day. "But I very quickly got over the awe of being in the palace. His way of being puts you at ease. He's totally unpretentious."