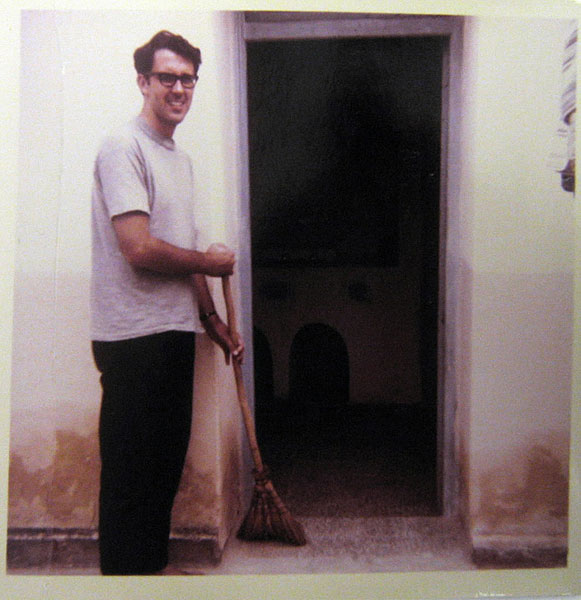 "The Peace Corps was much more about what happened to me and what I gained from it, just in terms of how I saw the world, the experiences I had, what we lived through," Doyle said. "Now I had a real skill and a real trade, something I could actually do to help people."

He started with service

Caption: Straight out of college, Jim Doyle taught English in a small Tunisian village with the Peace Corps. hoto/Courtesy of Doyle family

When Jim and Jessica Doyle arrived in Tozeur, a tiny outpost in the African nation of Tunisia, it was about 10 p.m. and it was dark, desperately dark.

They climbed from the train, carrying one suitcase each, and could not see a town, could not see any civilization, just the edge of nothingness. But this was their destination.

This was the Peace Corps.

The two, married less than a year, had graduated from the University of Wisconsin that spring. Then it was to Brown University for four weeks of intense study of Arabic and then to the capital, Tunis, for final, in-country training. There were chuckles when "Tozeur" was called out as their assignment.

Now the two waited, unsure what to do, when a voice came.

A man stepped forward and smiled. The two climbed into the back of a donkey cart, which took them to the village's lone hotel, and this dream of theirs, this new adventure began.

They were there to teach English, though they would soon realize they were getting far more out of it than they gave.

To be sure, the two came from a world of comfort. But in 1967, it also was a time of upheaval. Protests against the Vietnam War were growing on the campus they left behind. The two opposed the war, but it could seem far away from a town in Africa.

Tozeur was tiny, a few hundred people at most, the small, spare homes clustered around a larger school building.

The two, both 21, found a house across from the school, two rooms and a lemon tree in the courtyard between them. No plumbing, of course. Water was drawn from a well, sanitized with tablets so it would be safe for use.

But that often was not enough and, at times, the two seemed deathly sick. Both developed parasites, fought them off.

Without refrigeration, every day meant a trip to the market, where Jessica Doyle developed what became a running dialogue with a butcher.

"Do you have ham?" she asked, using one of the phrases taught at Brown.

They went around for a time, until Jessica Doyle switched the phrasing: "Well, what do you have?" The man smiled, a great big smile: "I have camel!"

It would go into a sort-of stew, though sometimes there was not even that to eat.

The two had dreamed about joining the Peace Corps for years, even figuring they would wind up in French-speaking West Africa. After all, Jessica spoke the language fluently and had even spent a semester in Grenoble, France. When spots opened in Tunisia, they looked on a map before saying yes.

At the school, each taught nine sections of English a day, with about 40 students in each. The faces were ones of hope, of possibility. Yet the two were not sure if they were making a difference, if a pair of Americans could teach anything to the people of an ancient country.
The next step

Even before they arrived, they had an idea of what would come next: law school for Jim.

His father went to Columbia, but Doyle applied to Harvard, Yale and the University of Chicago, as well as UW-Madison. Without a typewriter, applications were written in longhand.

He applied and waited.

When the two had gone off to college, Jim to Stanford and Jessica to Northwestern, they received big acceptance packets in the mail. When the letter from Harvard arrived, it was a thin one, but an acceptance letter just the same.

Their time in Boston amounted to a return to the world they had left behind. The war still raged, and they marched against it in Boston and Washington, D.C. In 1972, Doyle did some volunteer work on the congressional campaign of Democrat John Kerry, a veteran who opposed the war.

A Harvard degree, of course, could open doors. But Doyle was determined to leave those doors closed. He and Jessica still had the Peace Corps experience in their blood and looked for something similar in the United States, winding up on a Navajo Indian reservation in remote Chinle, Ariz.

Jim would work at a law clinic. Jessica, as she did in Boston, would teach in the school.

"The Peace Corps was much more about what happened to me and what I gained from it, just in terms of how I saw the world, the experiences I had, what we lived through," Doyle said. "Now I had a real skill and a real trade, something I could actually do to help people."

The reservation, like Africa, held poverty and problems. It would also hold their future.

It was there that the two, now in their mid-20s, decided to start a family, agreeing "Gus" was a great name for a boy. Ultimately, they pursued adoption and were told that it might take years. But in a matter of months, the call came: A baby boy was available.

Jim got the call and raced over to the school. Unable to find Jessica, he wrote out a message on the blackboard: "Gus is here. Meet me at home."

With only a few days to prepare, they borrowed a Jeep Wagoneer and drove to Gallup, N.M. - the closest big town - to get what they would need: Crib, clothes, playpen, diapers.

Life, of course, was changing.

They now had a child, bigger responsibilities. It wasn't just Jim and Jessica, on the next great adventure. It was hours to the closest hospital.

It was time to go back home.
THIS SERIES

So far: In the Doyle household, life revolved around politics, so it was natural for Jim Doyle to marry a young woman from a politically connected family and with her join the Peace Corps. For the Green family, the focus was on school and swimming, a sport that Mark Green mastered and that helped lead him to his future wife, with whom he planned his own adventure abroad.

Wednesday: Jim Doyle's 2002 gubernatorial win capped a political rise, as he won the job that eluded his father. For Mark Green, a stint in Congress would lead to a new opportunity.