Philippines RPCV Thomas A. Dine says Bagrov Conviction in Russia is an Effort To "Silence" Reporter 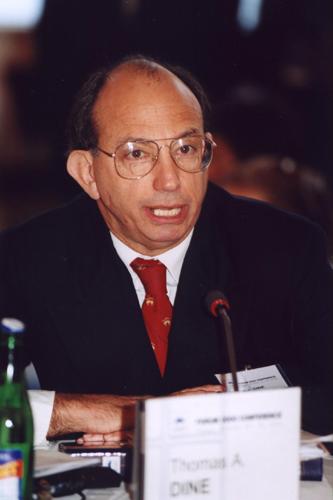 Philippines RPCV Thomas A. Dine says Bagrov Conviction in Russia is an Effort To "Silence" Reporter

(Washington, DC--December 20, 2004) RFE/RL Russian Service correspondent Yuri Bagrov was found guilty on December 17 by a court in Vladikavkaz, North Ossetia, of attempting to use a false document to obtain Russian citizenship and fined 15,000 rubles (about $540). As a result Bagrov -- who has covered the North Caucasus region for the past five years for The Associated Press and RFE/RL and is convinced that the legal proceedings against him were initiated because of his journalistic work -- must once again start the process of obtaining Russian citizenship. If Russian citizenship is denied, Bagrov, a former resident of Tbilisi, Georgia, may be deported.

Outraged by news of Bagrov's conviction, RFE/RL President Thomas A. Dine termed it "blatant harrassment by the Russian government" and "an official attempt to silence a reporter seeking to shed light on the dark events that continue to unfold in Chechnya and the North Caucasus. Such actions are especially egregious, as Russia's intervention in Chechnya grinds into its second decade."

RFE/RL Communications Director Donald N. Jensen added that "RFE/RL condemns the court's decision as a thinly veiled attempt to prevent Mr. Bagrov from doing his job, reporting accurately on events in Russia. The decision is consistent with other recent official efforts to curtail the freedom of the press in that country and interfere with RFE/RL's ability to carry out its mission."

Bagrov, who has lived in Vladikavkaz since 1992, denies the charge and continues to assert that he was granted Russian citizenship in 2003 by the North-West Municipal District Court of North Ossetia on the basis of his permanent residency as well as the Russian citizenship held by his mother and his wife.

On August 25, four days before the presidential election in Chechnya that Bagrov planned to cover, officers of the FSB's North Ossetian Republican Directorate, bearing a warrant authorizing them to search for guns illicit drugs and illegal documents, searched his home and auto without informing Bagrov of his right to have a lawyer present. According to Bagrov, the FSB agents took his passport, birth and marriage certificates, university diploma, Dictaphone, computer, notes, even his wife's personal diary. Although most of the documents were returned to Bagrov two weeks later, he has yet to get his passport back.

Without a passport, Bagrov is unable to travel anywhere to cover news for RFE/RL, such as the Chechen elections, or the Beslan school tragedy -- which unfolded only 10 miles from his home in Vladikavkaz. As one of his RFE/RL colleagues, Oleg Kusov, noted to the Russian newspaper "Kommersant" on October 8, the investigation has left Bagrov "disabled" as a journalist. Both Reporters Without Borders and the Committee to Protect Journalists have spoken out in support of Bagrov's desire to get his passport back and resume his journalistic work, as has the Moscow-based Center for Journalism in Extreme Situations.

Radio Free Europe/Radio Liberty is a private, international communications service to Eastern and Southeastern Europe, Russia, the Caucasus, Central Asia, the Middle East, and Southwest Asia, funded by the U.S. Congress through the Broadcasting Board of Governors.

This story has been posted in the following forums: : Headlines; COS - Philippines; COS - Russia; Journalism; Freedom of Speech; Radio