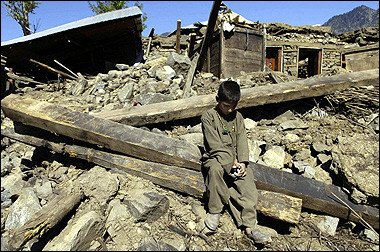 “At the moment funding for the United Nations flash appeal for Pakistanis still less than 50% of the funds requested. At this rate, funding will run out in January and the Pakistani people, who have already suffered greatly from the earthquake, will suffer again. The difference this time is that the global community can prevent this from happening,” Ms. Skoula continued.

Pakistan: Director of Action Against Hunger warns that more people will die if food supplies are cut off

New York - December 2 - The Pakistan earthquake, which fell from the headlines the past few weeks in spite of severe logistical and financial challenges to deliver aid, looks to become a breaking story again as winter has fallen on the Himalayan towns and villages that were most greatly affected by the earthquake that measured a 7.5 on the Richer Scale on 8 Oct. Several deaths have been reported and there are hundreds of pneumonia cases, mostly children, being treated in local hospitals in the past few days as a result of the recent snow and fall in temperatures. Food, which is one of Action Against Hunger's areas of intervention in Pakistan, has become the priority for relief groups.

“The next job is to continue the aid -- particularly food -- winter long. If funding for transportation, such as helicopters and trucks, runs out, people will die unnecessarily,” said Cathy Skoula, executive director of Action Against Hunger who has just returned from the mountains of Pakistan.

“At the moment funding for the United Nations flash appeal for Pakistanis still less than 50% of the funds requested. At this rate, funding will run out in January and the Pakistani people, who have already suffered greatly from the earthquake, will suffer again. The difference this time is that the global community can prevent this from happening,” Ms. Skoula continued.

Action Against Hunger started its emergency aid programs in Pakistanthe day after the earthquake and is providing shelter items, food aid, and water and sanitation supplies to earthquake victims in Rashang, Balakot, Jared, and Battagram. Full details on ACF's programs in Pakistanare available at www.actionagainsthunger.org.

Since 1979, Action Against Hunger has been a world leader in the treatment of malnutrition, dedicated to saving the lives of children, women, and men at risk of dying from malnutrition and working with communities to develop long-term solutions to hunger. Action Against Hunger is independent, non-political, and non-religious, and runs programs in nutrition, water and sanitation, health, and food security. We are physically on the ground making a demonstrated and measurable impact in around forty of the countries that most need the world’s focus and support. For a list of countries please visit: www.actionagainsthunger.org. In-country contacts are available.

Cathy Skoula became Executive Director of ACF-USA on May 2, 2005, the first American-born officer appointed to the position.

After graduating with a BS in Animal Husbandry from the University of Florida, Cathy Skoula worked with the Peace Corps in D.R. Congo (then Zaire) for four years, first teaching animal science and biology in a rural secondary school for two years, followed by a year as a small animal extension agent and a final year as a representative for other Peace Corps Volunteers. Upon returning to the states, she worked in biomedical research managing laboratories at FloridaStateUniversity, Universityof Arkansasfor Medical Sciences, and Carolina’s MedicalCenter.

While in North Carolina, Cathy Skoula returned to school, gaining masters in business administration and health administration from PfeifferUniversity. Using her accumulated experience and new knowledge coupled with an ever-present desire to work in the humanitarian field, Cathy Skoula successfully applied for a position with Action Against Hunger.

She has worked for Action Against Hunger for the past five years. Most recently she was country director for ACF-France's program in Myanmarwhere she conducted an exploratory mission leading to the opening of a base in Wa-controlled areas of ShanState. Prior to this, she was country director for ACF-USA's missions in Ugandaand the Democratic Republic of the Congo. She started with ACF-USA in 1999 as head of project starting a nutrition program in Lubumbashi, DRC and performing an exploratory mission that led to the opening of the base in Malemba Nkulu.

Cathy Skoula speaks English and French and has the notions of kiKongo, and kiSwahili.

This story has been posted in the following forums: : Headlines; COS - Congo Kinsasha; COS - Pakistan; Relief; NGO's