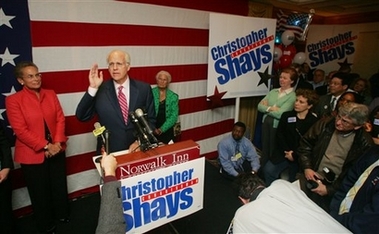 "We are only going to succeed on a bipartisan basis," said Shays, who noted that many Democrats had also voted to authorize the unpopular Iraq war. As he addressed the crowd, Shays invoked the name of four constituents killed in Iraq, including Army Spec. Tyanna Avery-Felder of Bridgeport. "I sent them to Iraq and they came home draped in American flags. I hope we get it right for these families." Congressman Chris Shays of Connecticut served as a Peace Corps Volunteer in Fiji in the 1960's.

Farrell refuses to concede to Shays

As his victory margin widened slightly to 4 percent, Shays said he would return to Washington and reach across the aisle to find answers to the war in Iraq.

"We are only going to succeed on a bipartisan basis," said Shays, who noted that many Democrats had also voted to authorize the unpopular Iraq war.

Shays addressed the cheering crowd at the Norwalk Inn, though Farrell declined to concede until all returns were in.

However, Michael Sohn, Shays' campaign manager, said the margin was too great for Farrell to bridge.

As he addressed the crowd, Shays invoked the name of four constituents killed in Iraq, including Army Spec. Tyanna Avery-Felder of Bridgeport. "I sent them to Iraq and they came home draped in American flags. I hope we get it right for these families."

Shays also warned the Democrats and the state Legislature not to rule by vetoes.

"In every election and defeat, a wake-up is delivered," Shays said. "America renews itself every two years."

Shays said there needs to be "cooperation and compromise."

Earlier in the evening, with all but a handful of precincts in the district's 17 municipalities reporting,
Advertisement
unofficial totals showed Shays leading the former Westport first selectwoman 50.5 percent to 49.5 percent.

However, there were reports of a possible problem in a voting machine in New Canaan, and the total likely didn't include the absentee ballots in Bridgeport, where Farrell would be expected to do well.

"It's very tight," said Irv Flacks, a Shays supporter from his Bridgeport hometown as he studied the projection board at the Norwalk Inn.

Flacks conceded Shays' support for the war in Iraq had cost him support, especially in his customary suburban strongholds.

Nevertheless, Shays' supporters broke into chants of "Let's Go Chris," as the totals board showed him taking the lead over Farrell at 10 p.m. A few minutes later, as it widened, the crowd broke into an exuberant chant.

Even the National Republican Congressional Committee, the party organization aimed at helping GOP candidates, dropped "bombs on our head all the time," he said. Sohn wryly recalled one commercial attacking Farrell for spending $40,000 on artificial turf for a ballfield.

"This is Fairfield County," he said, observing that some wealthy residents might spend that much on their lawns during the year.

Democrats targeted the seat as one they wanted to add to their column as part of a 15-seat switch needed to regain control of the House.

Helped by the goodwill he had built up over the years, Shays withstood Farrell's challenge to him two years ago by 4 percentage points. In that race, Shays had 149,891 votes to Farrell's 136,481.

But in the time since then, his role as an advocate for the war in Iraq increased even as the U.S. role there declined in popularity.

Meanwhile, with President Bush's job approval rating dipping below 30 percent in the district, Farrell hammered away at Shays for his support of such White House initiatives as tax cuts for the wealthy and privatizing Social Security. In recent weeks, Shays had to deal with a host of problems dealt him by both his party and himself.

Just as Congress recessed for the campaign, a scandal erupted involving U.S. Rep. Mark Foley, R-Fla., who stepped down. Farrell used the flap as one more reason voters should throw out the governing GOP in Washington.

Shays intensified the trouble when he defended House Speaker Dennis Hastert by saying no one drowned in his car, a reference to U.S. Sen. Edward M. Kennedy, who campaigned for Farrell and was involved in a 1969 fatal car accident.

Shays generated perhaps even more controversy when he said during a debate that the incidents at the Abu Ghraib prison weren't torture and was forced to backtrack.

The National Republican Campaign Committee sent out a series of mailers accusing Farrell of being soft on terrorism and high on fiscal mismanagement.

But some of their charges turned out to be outright wrong, such as a charge that as a member of the Board of Finance she had voted against restoring some police funds. Others, suggesting she would negotiate with the Taliban rather than fight them, seemed to energize her base.

Since he won the seat to succeed Stewart B. McKinney in a 1987 special election, Shays has not faced tough races until Farrell. He racked up majorities of up to 77 percent, and on more than one occasion, Democrats practically had to beg someone to run against him.