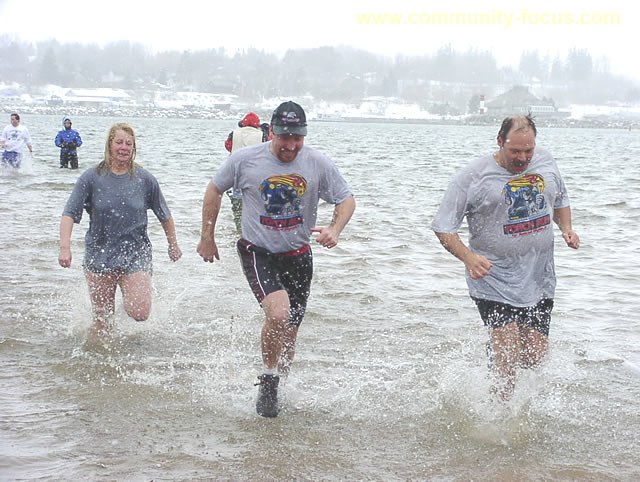 Caption: The photo above is of an icy plunge into Georgian Bay in the 2nd annual Polar Dip and is *not* the "Splash for Cash" in Oswego.

OSWEGO - A cold dip in Lake Ontario yielded some cold cash for Special Olympics on Saturday.

An event-record 43 brave participants took part in the fourth annual Spring Splash For Cash and raised over $5,000 for the Special Olympics New York Central Region.

Taking the quick dip for the first time in the Splash For Cash was Glenn Ivers, who in January was appointed regional director of the Special Olympics New York Central Region.

"I'm still tingling. I've got to admit, that was cold," Ivers said.

But Ivers is used to being cold in Oswego. He played in the annual Softball in the Snow fund-raiser in February.

Ivers discussed the recent restructuring of Special Olympics in the state. It used to be divided into many areas (Oswego County was Area 29). Now, the Oswego County program has merged with programs from Herkimer, Oneida, Madison, Jefferson, Lewis, Onondaga, and Cayuga counties to form the Central Region.

The Central Region will also host the State Winter Games in February 2006 in Syracuse, with an estimated 800 athletes competing.

"With eight counties pulling together, we should be able to tap new resources we couldn't tap when they were individual areas," said Ivers, a Syracuse native. "As a region, we can do a lot more. We're trying to reach out to more eligible people."

A graduate of Colgate University, Ivers has spent his entire career in jobs helping others. He worked in the Peace Corps in Africa and worked for the Boys Club, an adult literacy organization, and most recently was the executive director of the American Lung Association.

"When I watch, I'm reminded of what athletics is really supposed to be in its purest form," Ivers said. "Win or lose, they have fun. They have the joy of it."

The money raised from the Splash For Cash will be of great assistance, he said. "We'll put it right to work helping the athletes, improving the programs, and expanding the programs," he said. "Our athletes and their families participate cost-free, so we have to raise everything from public support."

"We're finding an enormous amount of warmth and fabulous volunteers already in place," he said. "But now I think if we combine our efforts, we'll be much stronger."

This story has been posted in the following forums: : Headlines; COS - Liberia; Special Olympics