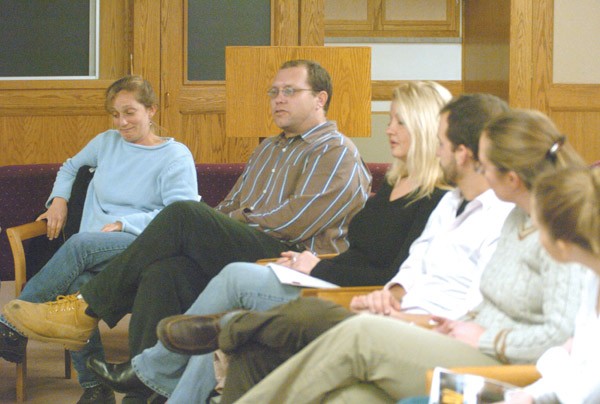 “This is not an information session,” said Keri McGeehan grad, who informally moderated the event. Instead, the students, all Returned Peace Corps Volunteers (RPCVs) who had been as far as Benin and Bulgaria, shared tales about their lives in developing countries. McGeehan returned from her work in Ghana in 2004; she is currently the on-campus recruiter for the Peace Corps.

“This is not an information session,” said Keri McGeehan grad, who informally moderated the event. Instead, the students, all Returned Peace Corps Volunteers (RPCVs) who had been as far as Benin and Bulgaria, shared tales about their lives in developing countries. McGeehan returned from her work in Ghana in 2004; she is currently the on-campus recruiter for the Peace Corps.

Panelists took turns discussing where they volunteered, the projects they worked on and how they lived.

Phillips, who worked with community health programs, was the third Peace Corps volunteer to live in her small village in Niger. She said that having the previous volunteers made her experience easier. Phillips told stories about keeping water in clay pots in the shade to keep it cool because temperatures in Niger regularly stayed above 100 degrees Fahrenheit. She also talked about the adobe wall around her house that “was tall until the second rainy season I was there.” She explained that she decided to quit her corporate job and join the Peace Corps because she wanted “something a little more meaningful.”

Daniel O’Connell grad spoke about living “in a subsistence village … with traditional farmers … [and] hunter gatherers” in Namibia. O’Connell also talked about many of the learning experiences he had while in the Peace Corps.

“You’ll be trained in culture and language ... there are some very interesting intercultural things … [for example,] men hold hands,” said O’Connell.

Fisk spent her time in the Peace Corps working with small business development in Benin. She talked about the conditions of living and working there.

“I lived in a very small village out in the bush … I didn’t have running water, electricity; I did have a well … working on developing credit unions within the area was my primary job ... [but I spent time teaching villagers to] read, write and basic accounting skills,” said Fisk.

Fisk said that she became very close with her nearest neighbors and saw them as her family. Her “little sister’s” water broke in Fisk’s house, and she helped deliver the baby.

Marygold Severn-Walsh grad spent her time in Bolivia working on creating community projects that could generate tourism profits. Like Fisk, Severn-Walsh spent much of her time on other tasks. “I taught English; I worked with knitting cooperatives … I worked on a library project … I also taught them how to use the Internet,” said Severn-Walsh.

Severn-Walsh also spoke about the climate of political unrest during her years in the Peace Corps.

“I was evacuated [due to political instability] more times than I can count ... I was in training during this huge political unrest … they came and did this huge commando evacuation,” explained Severn-Walsh.

Josh Woodward grad had different experiences than the other panel members; he spent his time in Bulgaria working on sustainable tourism.

“I had a thing called a sink … I had to fix my boiler … Bulgaria is different … none [of the other stories] applied to Bulgaria,” said Woodward.

Woodward also spoke about the importance of really learning the local language while in the Peace Corps; he spent almost the full first year mastering it.

The volunteers also talked briefly about health and safety issues while in the Peace Corps.

“You are going to get sick,” said Phillips McGeehan did her best to explain the Peace Corps “preventative medicines” and health care lessons.

“They scare you into taking care of yourself,” said McGeehan. All of the RPCVs were very enthusiastic about their time abroad. “Coming back was the most difficult part,” said Fisk.

Students attending the panel had the brief opportunity to introduce themselves. Attendees had majors ranging from biology and society to French to applied economics and management; many said they were interested in joining the Peace Corps because they were interested in public health, learning languages and experiences new cultures. “Peace Corps is not a loss, whether your going to not-profit, corporate or especially academic,” said O’Connell.