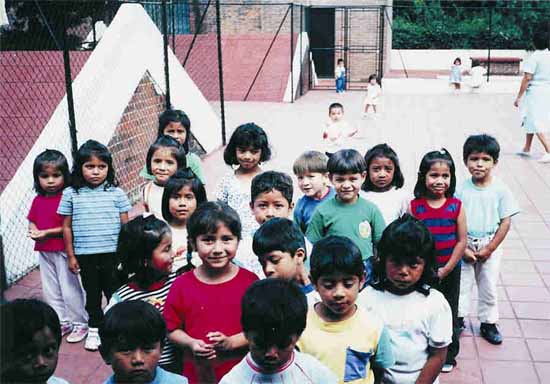 Read and comment on this story from the Hartford Courant on Brazil RPCV Sharon Price who founded the Children in Villages and Faith Association and has founded three orphanages in Guatemala and is helping two others get started. One of them contains 55 children abandoned in a filthy facility that the owner walked out of six months ago. Price is also working with a New London adoption agency to get some of the children adopted by Americans. Her dreams, though, are much bigger for the country where she wants to establish "villages" of regular and technical schools, clinics, agricultural endeavors, housing and more. Read the story at:

OLD SAYBROOK -- Emma Putnam was giving her parents a bit of a hard time about the used car they agreed she could have.

The Putnams were doing a whole lot of shopping around or dragging their feet, in their 17-year-old daughter's opinion. "I wanted the car now," Putnam said Tuesday, remembering with some chagrin her behavior this past fall.

But when she returned from an eight-day trip to Guatemala, where she saw children sleeping on bare floors and subsisting on black beans and bread, "that car wasn't nearly as important," Putnam said.

Putnam is one of three Old Saybrook High School seniors who in recent months went to Guatemala, where 90,000 children were left orphans from a decades-long civil war.

More students are planning to make the same trip, which includes no lolling on beaches or visits to museums and monuments, but does promise a heart-wrenching immersion in poverty, starvation, illness and sadness.

The school system is not sponsoring these ventures, but Principal Scott Schoonmaker is strongly in favor. "This is the ultimate in community service. This is hard core," Schoonmaker said Tuesday.

Schoonmaker gave both Putnam and Brittany Peckham permission to miss a week of school in October and will mostly likely do so for other students, because he believes the experience is invaluable.

Putnam saw a flier for the trip in the window of the local Dairy Queen, one of many fliers distributed by Sharon Price, the founder and director of a foundation called Children in Villages and Faith Association. Her organization is almost as threadbare as those she's serving, but it has made great strides in three short, packed years.

Price, who lives in town with her Episcopal priest husband and Christiana, the youngest of their four children and the third local senior who has served in Guatemala, has founded three orphanages and is helping two others get started. One of them contains 55 children abandoned in a filthy facility that the owner walked out of six months ago. Price is also working with a New London adoption agency to get some of the children adopted by Americans.

Her dreams, though, are much bigger for the country where she wants to establish "villages" of regular and technical schools, clinics, agricultural endeavors, housing and more.

Price and her husband were both Peace Corps volunteers and missionaries in Brazil, though Sharon Price came upon Guatemala not as a missionary, but as a student. Four years ago, she took a weeklong submersion course in Spanish there and "fell in love with the country."

Return trips quickly convinced her of the acute need for more orphanages in a country where homeless children are a frequent encounter.

It's mainly been through word of mouth that Price has gotten financial donations as well as donations of children's clothing, furniture, bedding, food and medicine. The volunteers who accompany her hear of the effort in the way Putnam did.

Putnam didn't even know it was her classmate Christiana's mother who was behind the effort until she called the number on the flier, she said.

Because Christiana is Brazilian by birth - she and an older brother were adopted as babies - and has been back to Brazil and seen poverty there, she was probably not as shocked as Putnam and Peckham by what she saw in Guatemala, she figured. Nonetheless, "It was very sad," she said.

"He's homeless, and he pretends to be a clown and is trying to get paid for his juggling," explained Christiana Price.

"When you see how ecstatic those children are about one pencil and I sit here in my Abercrombie sweater and Gap jeans," she said.
More Stories on Peace Corps Volunteers who served in Brazil

Read more about Peace Corps Volunteers who served in Brazil at:

This story has been posted in the following forums: : Headlines; COS - Brazil; Service; COS - Guatemala

Hello I am looking for an orphange to work in a as cook and also a childcare assistant. Right now I am living in california and work as a Youth Drug and Alcohol Prevention Director for the Long Beach Health Department. Please contact me if you know of any volunteer postions within America. Thank You