The world's broken promise to our children by Carol Bellamy 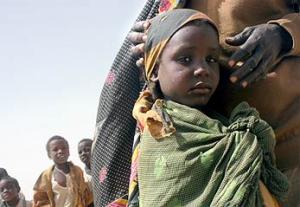 The world's broken promise to our children by Carol Bellamy

The world's broken promise to our children

STANDING ON THE side of a dusty road in northern Uganda earlier this year, I watched a trail of children on a desperate journey. The children were some of the "night commuters" of northern Uganda, the thousands of girls and boys who leave their homes every day at dusk to escape abduction by the Lord's Resistance Army.

Recalling the chilling image of children walking away from their mothers and fathers to camp out in the city until morning, I feel the same outrage that I experienced while visiting Beslan, Russia, where militants viciously used children to bring attention to their cause.

Surely these two phenomena -- the abduction of thousands of children to become soldiers and sex slaves in Uganda and the deliberate exploitation in Russia of the helplessness and beloved status of children -- are some of history's worst attacks on childhood.

Yet as tempting as it is to view such events as evil aberrations, they did not come out of nowhere. They came from a world that routinely exploits and neglects children. When governments allow children to be used in the commercial sex industry, to be swept up in the harshest forms of child labor, or to grow up without clean water, education, nutritious food or basic healthcare, they send an unspoken message that it is permissible to overlook the rights of children.

By adopting the 1989 Convention on the Rights of the Child, the nations of the world overcame cultural and religious differences to agree on standards to protect the lives of children. They embraced the idea that childhood refers not just to the time before adulthood, but to a separate and safe stage of life in which children can grow, play, and develop.

The appalling conditions endured today by half the world's children speak to a broken promise. Too many governments are doing worse than neglecting children -- they are making deliberate, informed choices that hurt children.

The severe threat to childhood posed by poverty, war, and AIDS is highlighted in UNICEF's flagship report "The State of the World's Children," which argues that the failure by governments to live up to the convention's standards causes permanent damage to children and in turn blocks progress toward human rights and economic advancement.

When atrocities against children catch our attention, the questions are quick to flow: How could this have happened? How could it have been prevented? How can we ensure that it will never happen again?

The answers do not come easily. But we can start by refusing to be outraged by one affront against children while ignoring others. If we decry the hostage-taking of children, we also must refuse to allow millions of children to wither away from diarrhea caused by a lack of clean water. If we are outraged when children are kidnapped by paramilitary groups, we must be more enraged that thousands of infants and young children are dying from AIDS because their families are too poor to afford medicine.

After 10 years with UNICEF it is clear to me that the world's sporadic outrage over the most grotesque violations of children -- targeting them in war, chasing them down to become slaves or soldiers -- reflects a broader acquiescence to a status quo that essentially says that, while awful, the daily and routine suffering of children is intrinsic to the human condition.

I don't believe that. The business of human and economic development goes on every day, with tens of billions of dollars at stake. These dollars can be invested in ways that help preserve and protect children's lives and well-being, or not. The power to ensure that childhood is the central priority of our investment is well within our command.

If children are going to survive and thrive, then we must we put them at the center of development policy and social spending decisions. When we adopt policies in any sphere of public or private enterprise, we should be asking ourselves how they will affect children.

We must work for greater investment in the services that mean the most to children, and ensure that national budgets are analyzed and monitored from the perspective of their impact on children. And when we do so, it should be with a full commitment to fulfilling the basic rights of every child, not just a statistical critical mass.

Only this kind of commitment will send the resounding message that no violation will go unpunished -- be it a violation against every child's right to survive, to be protected from exploitation, or to grow to adulthood in health and dignity. For 2.2 billion young human lives, childhood is unfolding now.

How it unfolds will be our shared legacy.

This story has been posted in the following forums: : Headlines; Directors - Bellamy; Children; United Nations; Unicef