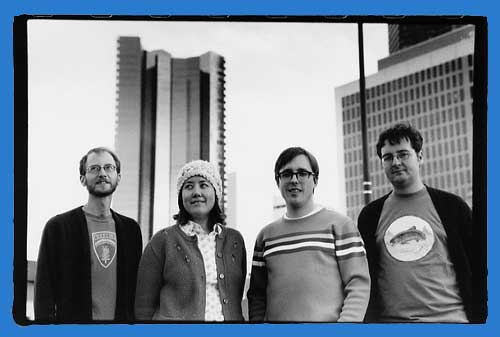 It was 10 years ago this month when Al Smith met Mike Levasseur on a plane bound for Africa. Their destination: the Peace Corps.

And it's no coincidence that Levasseur and Smith (a man of many names, mind you), who hail from Virginia and Maine, respectively, eventually landed in Denver to create The Maybellines, a band that's all about community.

The Maybellines are to indie pop what Planes Mistaken for Stars is to hardcore: Denver's important and well-respected addition to a thriving national scene. But The Maybellines blossomed during a very different era in Denver music.

Apples in Stereo was just gaining momentum as the flag-bearers of shiny indie pop in the West in the late-'90s when another band, Dressy Bessy, was finding its musical feet, also in Denver. The Breezy Porticos had been around for a few months when The Maybellines first came together via the demise of another band, Smith and Levasseur's Peace Corps project Five Guitar Army, a trio that wasn't as fierce as its name implies.

"When we were getting started, the scene seemed to be at its height," said Maybellines vocalist Julie Dorough. "But there's not much of an indie pop scene locally now."

After singing backup for the band on a whim, Dorough was voted in as lyricist and lead singer. It was her first experience in a band, and suddenly she found her expectations changing from "Oh, this could be cool" to "I want to be on a label!"


"It was a little weird and surreal at first," Dorough said recently, sitting in Smith's downtown apartment with her bandmates. "But for the first time in my life, I had this why-the-hell-not attitude."

Much of the band's history - seven years of Dorough on vocals, Levasseur on guitar, Smith on drums and Dave Reeves on bass - has followed such a philosophy. The Maybellines' first show was at Al and Mike's old house in front of 15 super-attentive friends.

"That was a bad decision," said Smith, who's perhaps best known as one of the DJs at the Hi-Dive's incredibly popular Wednesday night '80s dance party, "because it's probably better to have 50 people standing around not paying attention to you during your first show ever than to have 15 of your closest friends just sitting there staring at you."

Then there was their second show, where they played with two jam bands at Cricket on the Hill on a Wednesday night - a strange link to something still lingering on the band's to-do list.

"One of our goals over the next two years," said Smith, "is to create a jam band out of the same four members we have and play some random night at Sancho's Broken Arrow."

And that would be too cool.

But then there was the corporate gig, the time they were paid $500 to play for two hours in an Interlocken cafeteria.

Smith may be the drummer, but he's the band's musical mind - and also the head of its super-indie label, Best Friends Records. He swayed from punk in the mid-'80s to mod in the late '80s, from garage in the early '90s to indie pop in the mid-'90s, and he knows exactly how he wants The Maybellines to sound.

"As long as our songwriting setup stays the same," Smith said, "we'll always be an indie-pop band."

But now that the local scene is quieter than ever - the Apples moved to Kentucky, and Dressy Bessy continues to tour while building up its national fan base - The Maybellines, veterans of four tours themselves, are still holding the course.

They once slept on the lawn of an eastern Idaho truck stop. There was also the time when they showed up drunk to a show in Huntington Beach, Calif. - which ended up being a Mormon dance party.

It sounds wild and representative of the elusive rock 'n' roll lifestyle, but The Maybellines lead a saner existence than most touring bands - something that helps explain their consistency and longevity.

"It's fun to occasionally be the (bad boys), because we're always the most professional band, always getting there on time and playing within our set time," Smith said. "But we all hold steady jobs, and none of us are alcoholics - that's just not the way we are."

This story has been posted in the following forums: : Headlines; Music