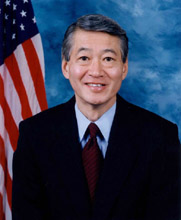 Mr. Speaker, I rise today to join my colleagues in honoring my good friend Congressman Bob Matsui, a true leader in the House of Representatives whose passing leaves us all with a sense of great loss.

I would like to say "thank you" to Doris, his wife and life-long partner, to his son Brian, his daughter-in-law Amy, and to his granddaughter for sharing him with us in Congress. In addition to the adoration of his wonderful family, Bob had the love and respect of both his constituents and his colleagues. He was a courageous and passionate leader who served California’s 5th Congressional District for 26 years.

As a Member of Congress and as Chair of the Congressional Asian Pacific American Caucus (CAPAC), I had the honor of working with Congressman Matsui. Bob was instrumental in making CAPAC a reality, and served as a CAPAC executive board member since its inception in 1994.

Along with Congressman Matsui and Secretary Mineta, I experienced internment as a young Japanese American during World War II. Bob was only six months old when he and his family were interned at the Tule Lake camp just months after the attack on Pearl Harbor. Bob understood the injustice of internment and sympathized with the other loyal Americans who suffered at the hands of the government in which they never lost faith.

Bob Matsui listened to people, and set about helping them with compassion and dignity. Whether he was fighting for flood control on behalf of his constituents in Sacramento or defending those without a voice, Bob dedicated his entire career to public service. From the time he worked as a member of the Sacramento City Council, to serving as the Vice Mayor of Sacramento, and finally as a U.S. Representative starting in 1978, Bob Matsui served as a constant reminder of what integrity and dedication can accomplish in public office.

Congressman Matsui truly believed in the U.S. Constitution and its promise of "a more Perfect Union." He relied on those values embedded in the Constitution in fights to ensure adequate healthcare for children and to provide a safety net for needy families and the elderly. Bob’s leadership as the third ranking Democrat on the House Ways and Means Committee and the Ranking Member on the Social Security Subcommittee earned him the reputation as an expert on tax and trade policy, Social Security, and welfare programs. In the 109th Congress, Bob’s presence and heart will be missed in the fight to save Social Security.

Mr. Speaker, Bob Matsui should ultimately be remembered for his civility, his dignity, and his service to others. He was a selfless role model whose footprint will forever be imprinted on our nation’s history.

This story has been posted in the following forums: : Headlines; COS - El Salvador; Politics; Congress