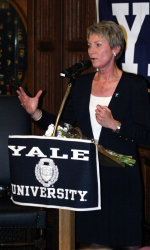 NEW HAVEN, Conn. - Chris Gobrecht, a 25-year Division I coaching veteran and a two-time Pacific-10 Conference Coach of the Year, has been named the new Joel E. Smilow, Class of 1954 Coach of Women's Basketball at Yale University and was introduced Monday at a press conference in the Kiphuth Trophy Room of Payne Whitney Gymnasium.

Gobrecht has amassed a 425-311 (.577) record after turning around the Cal State Fullerton program, becoming the winningest coach in Washington's history, spending a year rebuilding at Florida State and moving on to turn around the program at her alma mater, Southern California. Her Washington teams won or shared the Pac-10 title three times and reached the NCAA Tournament nine times in 11 seasons. Her squads reached the NCAA "Sweet 16" three times and the "Elite Eight" once. Six of Gobrecht's former players have played professionally in the WNBA and ABL.

"I believe Yale is one of the finest institutions in the world, and to be involved with this university is a privilege," Gobrecht said at the press conference. "I think my career has been leading up to this."

"I'm a huge believer in the Ivy League because it is the conscience of college athletics," she said. "I think it's important that the league does well because if your conscience is quiet, you can ignore it, but not if it's making a lot of noise."

The ninth coach in the 31-year history of Yale women's basketball, Gobrecht enters the Ivy League with more career victories than any other active coach in women's or men's basketball.

"My observation of Chris goes back to my days in the Pac-10 when I saw how well she developed the program at the University of Washington," said Athletic Director Tom Beckett. "She did a great job with the Huskies, and now she's a Bulldog. We think it's an absolutely perfect connection, and it's definitely the right move for us."

With USC's win over Pepperdine on Dec. 4, 2002, Gobrecht became the third active coach to reach the 400-win mark. She spent seven years as the coach of the Trojans, going 15-13, 11-7 in the Pac-10 to tie for third place, in her final season of 2003-04. Two of her recruiting classes at USC were ranked among the best in the country, and she regularly faced some of the toughest competition in the country. Her team's 2002-03 schedule included three of the previous four national champions in Connecticut, Tennessee and Notre Dame. Gobrecht had a 95-108 record and three winning seasons with the Women of Troy.

In her 11 seasons at Washington, Gobrecht won at least 16 games every year, had eight 20-win campaigns and finished with a 243-89 (.732) record. In addition to their three conference championships, her Huskies finished second in the conference four times. Her 1989-90 squad won a school-record 28 games and ended the season ranked third in the nation, the highest mark in program history. Washington was the only team to beat NCAA champion Stanford that year.

Gobrecht began her Division I career by taking over a struggling Cal State Fullerton program in 1979-80. She produced an 18-12 record in her third season on the job. In her final season of 1984-85, Gobrecht led the Titans to a 19-11 mark and their first WNIT appearance and was a finalist for national Coach of the Year honors.

Her coaching career began in 1978 at Santa Fe Springs (Calif.) High School, where her team went 20-4 and made the CIF AAA playoffs. The next year, Gobrecht led Pasadena City College to a 25-5 record, a conference championship and second place in the state junior college tournament.

In 1990, she was an assistant for a USA Basketball select team which played in Czechoslovakia and Italy.

Gobrecht has received several honors as a representative of women's basketball. In 1996, she won the Seattle Post-Intelligencer Sports Star of the Year award. She was also nominated in 1988. Gobrecht was a featured speaker at the NCAA's "Spotlight on Women's Basketball" in New York in 1991. She was honored as a 1990 Woman of Achievement by the Seattle chapter of Women in Communication at its annual Matrix Table Awards.

A Toledo, Ohio, native and a graduate of Huntington Beach (Calif.) High School, Gobrecht earned a bachelor's degree in public affairs from USC in 1977. Then known by her maiden name of Chris Geiger, she was a three-year starter for the Women of Troy from 1974-76 and also played volleyball for USC for two years. She spent a year after graduation in the Peace Corps, volunteering as an English teacher at St. Mary's College in Apia, Western Samoa.

She and her husband, Bob, have two children: Eric, 18, and Madeline, 15. Bob is the president and CEO of Special Olympics California. Eric will attend the U.S. Air Force Academy in the fall.

This story has been posted in the following forums: : Headlines; COS - Samoa; Sports; Basketball; Special Olympics