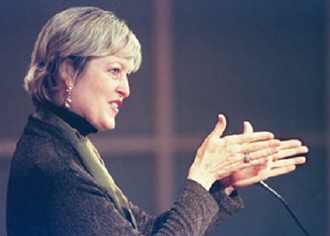 After getting her teaching certificate and working briefly as a caseworker in Salt Lake City, Olsen signed up for the Peace Corps in 1966. Following three months of training, she was off to Tunisia as a volunteer. Olsen worked for the Peace Corps, from 1979 to 1984 and 1989 to 1992, serving as chief of staff for two directors, and as regional director for North Africa, Near East, and Asia and the Pacific. She was also country director in Togo. Note: This profile of Jody Olsen was originally published in 2002.

When President George W. Bush nominated Josephine (Jody) K. Olsen BA'65 as deputy director of the Peace Corps in November 2001, she had already hiked a good way up the Peace Corps path. When the U.S. Senate confirmed her appointment in February, it was verification that she had arrived.

Olsen didn't know it at the time, but the beginning of the trail she seemed des-tined to follow started at the University of Utah. She arrived on campus in the early '60s, shy and studious, hoping that a college experience would provide some "rounding."

It did. "The U gave me an anchor," says Olsen. "I always felt like I belonged. In a very healthy way, it gave me a chance to express myself, to become more confident. It was a launching time, a wonderful, personal process of maturation."

Olsen lived in a dorm, joined Alpha Chi Omega sorority, and held office in the Women's Association, immersing herself fully in University life. If there was a defining moment during her four years at the U, it was, she says, at a conference on creativity, which she helped organize. Listening to scholars in the humanities and the arts elaborate on the personal creative process, she realized that "the depth and meaning of life situations come from a basket of creative experiences — teaching, learning, talking, interacting. Communicating across boundaries enriches our lives and helps us understand our differences. By stretching other people's minds, we stretch our own, and by doing that, we give back to others, encouraging participation in a dialogue."

One night at a sorority dinner, Olsen's immediate goal was crystallized. The evening's guest speaker was a Peace Corps volunteer who related her experience working in a developing country. The idea of doing something for America had recently been planted in the national consciousness by President John F. Kennedy when he established the Peace Corps in 1961. At that moment, the seed of the concept was sown in Olsen's mind. "I realized I could do something meaningful — by teaching in a totally different way and learning something in the process," she says.

"Providing the opportunity for people to volunteer is an extraordinarly good idea."

After getting her teaching certificate and working briefly as a caseworker in Salt Lake City, Olsen signed up. In 1966, following three months of training, she was off to Tunisia as a Peace Corps volunteer.

"The experience in Tunisia has stayed with me through the years — the impressions of the people, the culture, the religion," she says. "I had the opportunity to teach both children and adults and to learn from them. I was invited into their homes to share many meals as well as experiences."

She befriended one Tunisian family in particular. It began with language lessons and led to cooking and conversing "in wonderful ways," she says. "Nothing since then has exceeded the quality and depth of that relationship. We talked about Mormonism, about Islam, about everything." And, contrary to the image held by many today, "Islam is about peace and giving," Olsen asserts.

She was particularly impressed with the leadership roles that older members of Tunisian society play in the development of the immediate and extended families. "The grandparents are an integral part of kids' lives," she observes, "and spend a great deal of time with them. In that way, children are integrated into a strong, supportive working group."

These observations were a catalyst for Olsen's earning a master's degree in social work and a Ph.D. in human development, with an emphasis on gerontology, at the University of Maryland.

Afterward, she again worked for the Peace Corps, from 1979 to 1984 and 1989 to 1992, serving as chief of staff for two directors, and as regional director for North Africa, Near East, and Asia and the Pacific. She was also country director in Togo.

Before assuming her present position, Olsen worked for the Academy for Educational Development in Washington, D.C., and as executive director of the Council for International Exchange of Scholars, the organization responsible for managing the Fulbright Scholar program.

"It was a wonderful opportunity to observe changes that took place in faculty scholars," she says of her Fulbright association. "Professors with extraordinary research skills would live in another culture and return with amazing stories of the enrichment and value they discovered in experiencing and adapting to a totally different environment. I have always tried to be associated with systems that enable cultural enrichment," she says.

Olsen's responsibilities in her new position allow her to practice what she preaches, for the Peace Corps is all about cultural enrichment-for the volunteers who commit themselves to bettering peoples' lives and for those who are recipients of the volunteers' expertise and enthusiasm.

"Providing the opportunity for people to volunteer is an extraordinarily good idea," declares Olsen. "The volunteers are essentially ambassadors who promote international understanding and an awareness of other countries and cultures."

Perhaps that explains the undeniable success of the Peace Corps, which has been transformed during the four decades since its founding in the early '60s, a time of idealism and promise. Since 1961, more than 165,000 Americans have joined the Peace Corps, serving in 135 nations. Today, there are 7,000 Peace Corps volunteers working in 70 countries.

Still, there is much to do.

President Bush, in his January State of the Union address, committed the Peace Corps to double in size over the next five years, giving many more Americans an opportunity to serve. "I am eager to help make that happen, and in the process, speak about valuing service," comments Olsen.

As President Kennedy said at the signing of the Peace Corps Act, "[E]very …American who participates in the Peace Corps will know that he or she is sharing in the great common task of bringing to man that decent way of life which is the foundation of freedom and a condition of peace."

This story has been posted in the following forums: : Headlines; COS - Tunisia; Staff