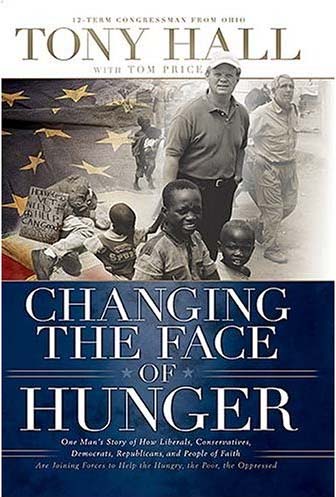 Providing food for one’s enemies not only fulfills a basic teaching of Jesus Christ; it’s also good foreign policy, said Hall, an evangelical Christian who served 12 terms in the U.S. House of Representatives and recently completed a stint of a more than three years as ambassador to the United Nations Agencies for Food and Agriculture in Rome.

“When we feed hungry people -- and help them solve other problems -- we create goodwill that can last for generations, cement alliances and make us safer in an often-dangerous world,” he wrote in his new book, Changing the Face of Hunger. “To fight terrorists who label us the enemy of the poor and the oppressed, we must make clear that we are the poor and oppressed’s best friend.”

The world does not lack the food necessary to eliminate chronic hunger; it lacks the political and spiritual will to bring about change, he added in a phone interview conducted while on his book tour.

“We grow enough food to feed everybody,” said Hall, a three-time nominee for the Nobel Peace Prize. “We need more political will and more spiritual will. We need more people of faith involved.”

In 1993, when Congress eliminated the House Select Committee on Hunger -- which Hall had co-founded and chaired -- he went on a highly publicized 22-day fast to raise awareness and express his solidarity with the world’s hungry people.

Hall traces his intense commitment to justice for the poor and food for the hungry to an admonition by Mother Teresa of Calcutta and a question by a Christian mentor who helped disciple him.

When Hall asked Mother Teresa how she could hope to make any impact on the world’s vast problems, she said, “You do the thing that is in front of you.”

And when Hall met in a small group of Christians in Washington, D.C., about two years after his conversion, one of them asked him, “Tony, don’t you think it’s time you brought God into your workplace?”

Hall initially resisted. “I didn’t want to be seen as a politician who wears his religion on his sleeve,” he explained.

But witnessing firsthand the pressing needs of hungry people in the United States and around the globe fueled Hall’s passion for justice.

He visited famine-stricken Ethiopia, investigated human-rights abuses in Romania, traveled to North Korea six times to witness hunger in a Communist country closed to most American officials, and brokered a deal with Mu’ammar al-Gadhafi so food from the United States could be trucked through Libya and delivered to refugees in Sudan and Chad.

Hall, an Ohio Democrat, bridged partisan politics to build alliances with colleagues such as Frank Wolf, a conservative Virginia Republican, who shared his concern for human rights and global security.

“We can put aside partisan differences by concentrating on the things we agree upon,” he said. “It’s hard to demonize others when you spend time together, pray together and really get to know them.”

Hall remains convinced issues of hunger and poverty can let most people of goodwill find common ground if they see for themselves the needs of hungry people -- whether in a refugee camp on the other side of the world or at a homeless shelter in their own community.

“I’ve traveled to 120 nations,” he said, “and I take people with me to show them, to educate them. I’ve taken politicians and businessmen to see the good and the bad -- programs that work and programs that don’t work.”

People of different faiths and different political philosophies recognize compassion as a virtue, he stressed. By approaching the problem from different perspectives, they offer a variety of solutions -- governmental aid, personal charity, small loans to benefit micro-enterprise, literacy programs and health-care education to improve standards of living.

“Some of the most effective programs are public-private partnerships between government and business,” he said.

Christians, in particular, have a responsibility to meet human needs and become advocates for poor and hungry people, he said, noting the Bible includes more than 2,000 verses concerning the poor.

“If each of us just did the thing that is in front of us, that would take care of half the problems in the world,” he said.

Professor Jeffrey Sachs ( see The end of Poverty ) argues in the same was that money will make the difference in the underdeveloped countries. However, there is simply no proof of that assertion. There are no statistics to support that assertion, only anectodal evidence that in some small number of cases, a difference has been made.

Money without monitoring will produce limited and dissapointing results. Problems without specific solutions will be equally disapointing.

Some interesting reading to understand why $ alone is not a paneca:

Any book on Globalization;
"White Man's Burden" by William Easterly;
Reports about the use of IMF and WB monies and the effects/affects they promote;
Camping with the Prince by Thomas Bass;

Finally, ( and you can verify with 'googling', find Jeffrey Sachs statement that for every $100 of aid given only ( no typo here =>> ) one cent actually arrives in country to help those in need.
That simple fact should raise serious doubts abou the action, the process and the conclusions.

I believe that Tony is well intentioned, but truly uninformed. Education is power - as it has always been.
Joe C ( Ethiopia III )