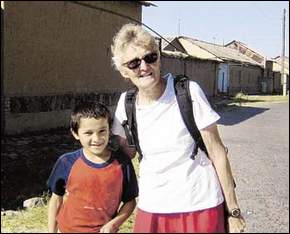 Caption: Gerry Blackman with one of the children in the village of Kukgumbaz whom she has befriended with candy and Frisbee lessons. In the background is one of the village homes, made up of several small buildings for sleeping, cooking, dining and other functions, within a fenced compound. PHOTO COURTESY OF MARCIE LOCH

Gerry Blackman struggled with the language, lost 25 pounds because of the change in diet and had to fly back to Washington, D.C., to have a nagging shoulder injury repaired.

But the 64-year-old former Great Falls woman is enjoying living the dream she'd held for nearly 45 years, serving a 27-month Peace Corps stint in the south-central Asian country of Uzbekistan.

"It's been quite rewarding," Blackman said in a phone interview from D.C., where she was recuperating from her surgery. She expected to fly back a few days ago to the former Soviet republic just north of Afghanistan.

Blackman's accomplishments have been gradual during eight months in Kukgumbaz, a village of 2,500 in Jizzakh State in the far east of Uzbekistan.

She is working to set up small-group health discussions for women and striving to find ways to improve nutrition in a sustainable way by showing her host family how to plant broccoli and spinach in their garden.

She also has become somewhat of a Pied Piper — village kids rush her when she walks down the street since her Montana friends have sent her Frisbees, new soccer balls and candy to give them. Before they kicked around a flattened ball.

"The kids had me toss a Frisbee around with them for about 30 minutes last summer, when it was steadily in the high 90s, and I was soaking wet when we finished," she recalled.

Blackman shook up the small town a bit by being the first woman to attend a men's soccer game. Now a handful of Uzbekistani women join her.

She also has taught many of the adults how to jitterbug, with women and men dancing separately because of their Islam rules. They've shown her their style of dance, akin to belly dancing. Blackman says it's not so easy at her age.

She has found a ready audience of more than 60 Montana friends who read her regular e-mails filled with colorful descriptions of the history, culture and lifestyles of people in this ancient but impoverished country.

Two of the correspondents are Great Falls buddies and former softball teammates Donna Berkhof, a retired educator, and Jan Schindele, a social worker.

"Her e-mails are fascinating, because Gerry is such a good observer with so many interests," Berkhof said. "She will write whole segments about the country's architecture, her family's well-kept garden or the day-to-day graft that accompanies so much poverty."

"Gerry essentially put her furnishings and home in Lolo and her lifestyle in storage," Berkhof added.

"We were really concerned initially about her decision to join the Peace Corps," Schindele said. "She was going to an Islamic country in a part of the world close to terrorists where we thought Americans could be at risk. But she is living out her longtime dream of helping making a difference through peaceful means."

Blackman was raised in Great Falls' North Side, where she later spent time as a teacher, an employment counselor and a stay-at-home parent to three young children. She also was the "sparkplug" second baseman for decades on a lively woman's softball team.

Her parents were Jerry and Frances Blackman.

"My brother Joe and I had to sleep in sleeping bags for a few days once when we got home and discovered Dad had given our beds to a new co-worker who had almost nothing for his family," Blackman recalled fondly.

While she was attending Montana State University in Bozeman, then-presidential candidate John Kennedy challenged students nationally to serve their country by working in developing countries under a program he dubbed the Peace Corps.

"The idea of such peaceful activism really ignited me and many of my friends," Blackman said. "It was before the war in Vietnam heated up, but I knew some people were leaving the campus to join the conflict in Vietnam."

By the time Blackman graduated and the Peace Corps was approved, "reality hit," she said. "I had college loans to repay and other responsibilities to meet."

Blackman taught two years at Great Falls High School and two years at East Junior High before quitting to raise the three children that she and then-husband Mike Loch had in less than three years.

"Well, I guess we know better now that's it's healthier for mothers to space kids out," she said with a chuckle. "We also had better maternal care in the United States, even back then, than they have over there now."

Blackman raised the kids as a single parent after her divorce, and went back to work when her kids entered school, working as a job counselor and later a rehabilitation therapist.

She moved to Missoula with her job in 1989, living in Lolo on a small lake that she loves to canoe. She has kept in close touch with her friends here.

Her children have all thrived. Eldest daughter Christie lives in Pennsylvania and has been involved in DNA research. Son Rob is a power plant manager in the Tri Cities area of Washington. Youngest daughter Marcie does medical engineering research in San Francisco.

A foster son, Roger Forbes, lives in Great Falls and remains in close contact with the rest of the family.

"For years, I thought the idea of serving in the Peace Corps had passed me by, although I lived it vicariously through the experiences of some friends who'd joined," Blackman said. "I still thought about it from time to time. When I read several years ago that the Peace Corps has no upper age limit, I began to make my retirement plans around joining."

"I asked to work in the health and education field in a rural area, and told them I'd prefer to work somewhere from which I could see the mountains, if I wasn't actually in them."

"They placed me in a rural area in the foothills, within sight of beautiful snow-capped mountains."

Uzbekistan is a country about the size of California. Most of its 24 million people live in small rural villages with few job opportunities.

Kukgumbaz is in a rural agricultural part of Jizzakh state, a high prairie lying between two large ancient cities, the capital of Tashkent and Samarkand.

Those cities were part of the Great Silk Road that Marco Polo and other early traders used to travel between Europe and China.

"There are a lot of contrasts and contradictions within this country," Blackman said.

She lives with a family "that worked their tails off" to become relatively affluent. They have spotty electricity and running water, a car and an older Soviet television and VCR, goods that most villagers don't own.

The mother works from dawn to well past dark to clean and cook for her large family, but has more say in family decisions than most women, Blackman said. Her husband, who has failing vision, even agreed to let her learn to drive.

Their home is made up of several small buildings, for different functions such as sleeping, dining and washing, within the same walled compound. When the running water isn't working, the mother has to tote water 100 yards from a spring. There's a stark, stinky outhouse, containing a hole in the ground at which users must crouch with no seat.

The close-knit community reminds Blackman of what she's read about rural American towns of the 1930s and 1940s. Everybody knows and looks after each other, and the power and running water, when available at all, often shuts down.

"I still can't figure out why Americans are treated so well here," she said. "After all, Uzbek men once were conscripted to serve in the Soviet Army, when Americans were their enemy. And U.S. troops now are fighting in the Islamic countries of Iraq and Afghanistan."

But Blackman figures the country's people are more Islamic by culture and tradition than politics. "Uzbekistan is run by a pretty rigid dictatorship calling itself a democracy, and it takes a firm hand in curbing extremists," she added.

Nevertheless, there was a terrorist bombing near the president's compound in Tashkent within a few miles of where Blackman was receiving her training early last year.

And Peace Corps officials occasionally spread the word that things could be dangerous and tell volunteers to stay close to their house and avoid public places such as the shopping bazaars.

Blackman, a hiker and bicyclist who was fit to begin with, lost 25 pounds while trying to get adjusted to a diet rich in spice and potatoes, scant in meat and cooked in cottonseed oil that initially made it hard for her to digest the food.

But most vexing to Blackman is her on-going struggle to communicate with villagers "at a deeper, feeling level beyond very crude sentences."

She also is concerned about the future of a country so poor that clinics aren't stocked well with basic medicines and medical professionals and teachers may go unpaid for months at a time. That leads to the accepted practice of people with a little more money making small payments to get better medical treatment or better grades for a child, she said.

Still, Blackman believes she was making small progress on several fronts at the clinic and in individual relationships before a rotator cuff injury she suffered many years ago flared up. She had to be flown home to America for surgery in mid-November.

Showing characteristic humor and backbone, Blackman e-mailed her friends not to fret about her injury.

"Please don't worry," she said. "I'm tougher than coon s— and have too much left undone in my life to mess around with a limp arm."

This story has been posted in the following forums: : Headlines; COS - Uzbekistan; Older Volunteers