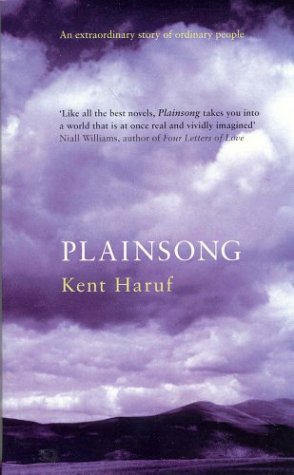 Here's what you've been waiting to hear:

It's the "it" book of 2005 -- the book everybody in Kent County will be reading the next two months as part of "Read Along the River: One Book, One County." The book will be announced Monday at a press conference by the program's sponsors -- every library in Kent County, Schuler Books &amp;Music, the Humanities Council and Calvin College.

The next big question: What's it about?

"Some reviewers think nothing happens in it," Haruf says, with a chuckle from his home in the mountains of Colorado. "I say a great deal happens. People form relationships. An old woman dies. A horse dies. A teen-age girl gets pregnant and has a baby. Things happen that are the natural things that happen in life."

In the small town of Holt, Tom Guthrie, a high school teacher, fights to keep his life together and to raise his two boys after their depressed mother retreats into her bedroom and then moves away to her sister's house.

The boys, Bobby and Ike, 9 and 10, struggle to make sense of adult behavior and their mother's apparent abandonment.

A pregnant teenage girl, Victoria Robideaux, kicked out by her mother and rejected by the father of her child, searches for a her place in the world.

And far out in the country, two elderly bachelor brothers, Raymond and Harold McPheron, work the family farm as they have their entire lives, all but isolated from life beyond their community.

Haruf writes about what binds them together -- hope, kindness, dignity. It's a powerful story whose characters you want to take home for supper.

The New York Times Book Review called it "a novel so foursquare, so delicate and lovely ... it has the power to exalt the reader."

"It must have something universal in it -- I hope it does," Haruf says.

"I'm not writing exclusively about Colorado or the high plains," he says.

"These are the problems people have everywhere -- families breaking up, teen girls getting pregnant, lonely old men. You find these things all over the country.

"I've given readings all over the country, and somebody always says, 'I know the McPheron brothers -- they live just south of town.' That happens in Cincinnati and Tallahassee and Memphis."

Haruf grew up in the high plains of northeastern Colorado, the son of a Methodist minister.

"It's the place in the world I have the deepest and most profound emotional response to," Haruf says. "The plains aren't pretty, but they're beautiful, if you know how to look at them. Nothing's hidden in the plains -- everything is in plain view."

In the plains, Haruf says, things are stripped down to the essentials. That seems to fit the story, he says.

Haruf, 61, writes full time near Salida, Colo., where he lives with his wife, Cathy. He taught English for 30 years, a fact that will dismay at least one woman in Illinois.

When his characters talk, it looks the same on the page as his narrative.

Haruf says it forces the reader to slow down, to read more carefully. It takes some getting used to.

"One woman in Illinois told me she read three pages and couldn't read any more," Haruf says.

"She said she hoped I wasn't an English teacher."

He served in the Peace Corps in Turkey, teaching English as a second language to middle-school kids.

And it seems he's done about everything else, working at a chicken ranch in Colorado; a construction site in Wyoming; a railroad in southeastern Montana; a pest control company in Kansas; a rehabilitation hospital in Denver; an orphanage in Montana; an alternative high school in Wisconsin; a country school in Colorado and colleges in Nebraska and Illinois.

Now, he writes. And, if you give him a chance, rants.

He hates the proliferation of sex and violence in books, TV and movies. He won't pander to it, he says.

Still, you should know the boys you'll come to love, 9-year-old Bobby and 10-year-old Ike, see more than any kids their age should, including watching three teenagers having sex in an abandoned house.

"It should be," Haruf says. But it's there for a reason.

"Their parents' marriage is breaking up. When that happens, kids' lives change enormously in ways they have no control over," he says. "These boys are exposed to things kids their age shouldn't have to think about. But their moral judgment is appropriate. By the end of the novel, they're still whole."

But he insists his quiet book about kindness and family isn't "pollyanna-ish."

"Their problems are still there the next day, but, at the end of the day, they've developed some relationships," Haruf says. "The book ends with everybody about to go in to have dinner together. That's not everything, but it's something."