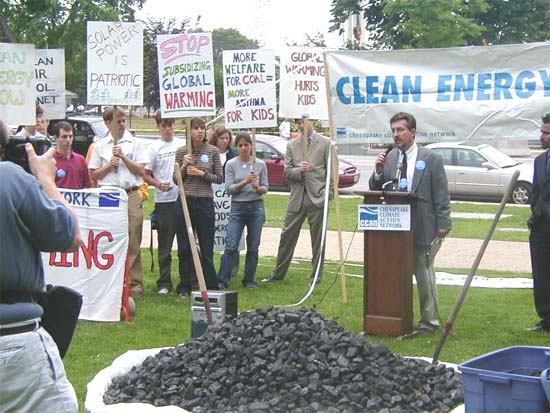 (CNSNews.com) - Environmental advocates in Maryland have called for the immediate resignation of one of the Sierra Club's most powerful officials in the state over his "blatant suppression of scientific data" that might show a wind farm poses no threat to migratory bird populations.

In a statement released on Monday, Mike Tidwell, director of the Chesapeake Climate Action Network (CCAN), accused Dan Boone, conservation chair of the Maryland Sierra Club, of repeatedly refusing to release the results of a study conducted in Garrett County by a team of noted ornithology experts Boone picked himself.

The study data has been available since last spring, Tidwell said, but Boone has rebuffed repeated requests by bird advocates and other conservationists to release the data even as he calls for more and more avian studies.

"In all my years of environmental advocacy, I have never seen such an abuse of power and a total disregard for the Maryland environment and the welfare of Maryland citizens," Tidwell said in the release.

"Boone is committing a huge disservice to this state and to environmental advocates everywhere who know that clean wind power and birds can co-exist," he added.

According to its website, the CCAN is "the first grassroots, non-profit organization dedicated exclusively to fighting global warming in Maryland and the Greater D.C. region."

The site lists the group's mission as "to educate and mobilize citizens of the region in a way that fosters a rapid societal switch to clean energy and energy-efficient products, thus joining similar efforts worldwide to slow and perhaps halt the dangerous trend of global warming."

On Monday, Tidwell said that across America and Maryland, "conservationists have been increasingly encouraged in recent years by the dramatically low rate of bird fatalities at properly sited wind farms."

However, Boone -- whom Tidwell called "a well-known opponent of all wind farms in Appalachia because of their alleged 'visual impacts' and alleged threats to birds" -- has actively opposed wind farms in the region.

"All one can conclude is that Boone doesn't want the public to know the truth that well-sited wind farms don't harm bird populations," said Gary Skulnik, executive director of the Clean Energy Partnership in Silver Spring, Md.

"Boone has a personal agenda that he appears to value above the common good he pledged to protect as a top Sierra Club official," Skulnik added. "He should resign right now."

A message at the site states that the Sierra Club "espouses the many benefits of clean, renewable energy including wind power on its web site, in its printed materials and elsewhere. It has criticized the Bush Administration for promoting fossil fuels over renewable energy. And yet the second highest official in the Maryland Chapter is seemingly doing everything he can to prevent wind farms and thus pave the way for fossil fuel power. This must end."

A letter has also been sent to Carl Pope, national president of the Sierra Club, asking him to remove Boone if he refuses to step down.

This story has been posted in the following forums: : Headlines; COS - Congo Kinshasa; Environment; Wind Power; Birds