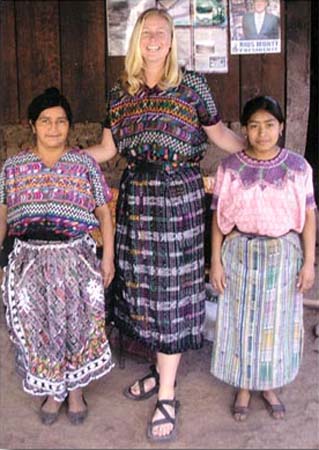 
Caption: Faedra Fisher poses with two of the Guatemalan women she worked with during her time with the Peace Corps as a “grassroots veterinarian.” At six feet tall, Faedra – the shortest in her family – towered over the women and men in Guatemala. Photo Special to The DPA

NIOTA – Faedra Fisher recently completed a stint in the Peace Corps, the advertising for which calls it “the toughest job you’ll ever love.”

Faedra, 27, was born and raised in Niota. Her parents are Danny and Gayle Fisher, and her siblings are sisters Felicia, Farrah and Fannessa, and brother Fyke.

Faedra (pronounced FAYdra) said many people do not understand what the Peace Corps is. The organization is funded by the U.S. government to help the international community understand America and for Americans to understand other cultures.

Faedra returned home around Thanksgiving after spending two years and three months in Guatemala. At age 24 she began making plans “for what you’re supposed to have” – your own family, mortgage and a nice car – when you become an adult. She decided to join the Peace Corps because, she said, “if you’re ever going to do something for someone else now’s the time.”

She had traveled before, spending six weeks in Mexico and enjoying a family trip to Italy. Because of her travels to neighboring Mexico, she was expecting a feeling of safety, cultural expressions and good food.

“That’s not what I got,” Faedra said. “I had warped expectations of Guatemala.”

Faedra said she worked with people whose recent history is tragic because Guatemala’s 30-year civil war ended only 10 years ago. She worked with indigenous people on what their rights are and said “what their futures could be was a large part of my job.” She added there was “very little hope” in the area where she worked in central Guatemala.

Faedra said when her parents realized she was serious about joining the Peace Corps, they insisted she not go to Africa because of concerns for her safety.

“A couple of months ago we found out that Guatemala is the most dangerous country” she could have gone to, she said.

“I was a grassroots veterinarian,” Faedra said, adding that the only skill she had was that she grew up on a farm.

Faedra learned her skills are not so extensive because all the animals at home were healthy, but those in Guatemala were not. She lived in a pueblo and would walk to nearby villages – think walking to Niota or Sweetwater from Athens – to discuss problems the animals would have. She would lecture then have a question-and-answer session with a group of women, then would walk through the village with the women to check on the animals.

“It was very empowering for these women,” Faedra said.

She said it took time to convince the women they could doctor both big and small animals. The women said she could work with large animals because she is so “big.”

“These women were half my size,” Faedra said. “I’m not kidding…half my size.”

She taught the women to take care of the animals, like some minor surgical procedures and how to give injections to large animals.

Faedra lived in a two-bedroom apartment in the city where she “had water twice a day.” She had one sink she used for washing everything from dishes to clothes. She got protection by getting to know her neighbors, and she eventually got used to being stared at.

“It was really interesting to watch me, I’m sure,” she said.

Albeit, Faedra may have been especially interesting because she is blonde with a fair complexion in a tan-skinned culture… and she is six feet tall.

“That was crazy because I’m the shortest in this family,” Faedra said.

Peace Corps volunteers are not allowed to live with each other because the purpose of the experience is to get to know people and their culture, but two other volunteers lived in the same city as Faedra.

“I was robbed eight times,” Faedra said. “I set a record for the Peace Corps.”

There was one one face-to-face robbery, but the other times she was the victim of pickpockets.

Faedra said it took eight or nine months from her decision to volunteer until she arrived in Guatemala.

“It is a huge interview process,” she said.

After she was accepted, Faedra was placed in two months; three months later she left for Guatemala.

“You do have to be a college graduate,” Faedra said, adding that, basically, if you have the focus to graduate from college and are willing, then you can be trained.

Faedra said she never got discouraged with the application process and never thought of giving up.

“ I’ve decided I’m really stubborn,” Faedra said, joking she never knew she had that trait in common with her father.

“My parents were super-supportive,” she said, quickly adding, though, they didn’t pretend to understand why she wanted to be there.

Also, nobody in her family came to visit because there is so little security in Guatemala. Faedra said the first year of each volunteer’s Peace Corps experience is about getting familiar with the country and gaining trust among the people you work with. During the first three months she learned Spanish and the technical skills to do her job. She also attended classes on cultural and gender sensitivity. She also didn’t say much but learned about the Guatemalan culture by listening and observing. During the second year, volunteers are encouraged to do a project to benefit the local people.

Faedra said one of the villages had no egg production, so for her project she worked with seven women on a plan to raise chickens so they would have eggs for their families to eat and eggs to sell. She needed $700, so she asked her parents for help with the fundraising. Donations came in from Keith Memorial United Methodist Church and Mayfield Dairy Farms.

“The people of Athens really came through for me and these women,” Faedra said. “The payoff, I think, has been huge.”

With the donations, Faedra and the women built seven chicken coops with 15 laying hens in each coop. She checked on the chickens weekly until she left Guatemala.

“By the time I left their hens were laying eggs,” she said. “That village’s life is better.”

Faedra estimated that more than 450 families have new and better skills to work with animals and provide for their families.

“It’s pretty crazy to think two years of my life and I’ve made 450 lives better,” she said.

“The people of Athens really helped me achieve that project,” Faedra said, adding she and the families that benefited from it are thankful.

The head of Peace Corps visited from Washington, D.C., to see her project.

“That was amazing to have recognition throughout the ranks of all of Peace Corps for that chicken project,” Faedra said.

Later, she got to meet the president of Guatemala.

“We got to go to the presidential palace,” she said. “It was wild.”

Faedra said the outpouring of warmth and love from people she worked with was overwhelming. She occasionally thinks she could have done more during her time in Guatemala, but she is proud of what she accomplished.

However, Faedra was ready to come home for a number of reasons. For example, the only men who asked her on dates were three feet tall, had third-grade educations and spoke limited English, “and that’s no joke,” she said.

Faedra said her Peace Corps experience was a great adventure but is also has given her a wanderlust to see the rest of the world. She helped temporarily satisfy her interest in traveling by spending a month in Peru before she returned home.

Faedra said as a proud American “I felt like I was an ambassador for my country.” And, now that she has returned home, she is busy educating people about her experiences. As part of her drive to educate others, Faedra talks to family and friends about her experiences and the culture she visited. She plans to participate locally in Peace Corps Day in April to share her experiences.

“I’m hoping to help younger generations see what Peace Corps is,” Faedra said, adding she plans to write about her experiences one day.

And, because she lived for two years in a poor culture, Faedra believes she will always be grateful for whatever is given to her. She is most grateful for family and to live in a free country.

Faedra said it has been a challenge to re-acclimate back to living here.

“It has been really nice laying around the house and getting used to life here again,” she said, adding she is looking forward to living a normal life “for a while.”

However, there is one thing she must work at.

“My English vocabulary is not what it used to be,” she said.

A graduate of McMinn County High School, she attended the University of Montana where she studied journalism with an emphasis in radio and television broadcasting. Faedra is planning a move to Nashville where she will live with a roommate. She said friends of her family’s friends live nearby so she’ll still have ties to home.

“I have no idea what my job will be so I’m looking into anything that’s available,” Faedra said.

She has looked at going into nursing because she could help people anywhere in the world.

“I definitely will be a volunteer again in some aspect,” she said. She also plans to volunteer on the community level.

“I’m really proud of Peace Corps as an organization,” Faedra said, adding the best thing she learned over the past two years “is I can do anything.”

This story has been posted in the following forums: : Headlines; COS - Guatemala; Directors - Vasquez; Veterinary Medicine; Chickens