One of the hostages held in the American Embassy in Teheran was RPCV Barry Rosen. Years later, after 9/11, Mr. Rosen persuaded Teachers College, where he headed the press office, to resume its work of the 1970's in Afghanistan compiling school textbooks for the Ministry of Education. 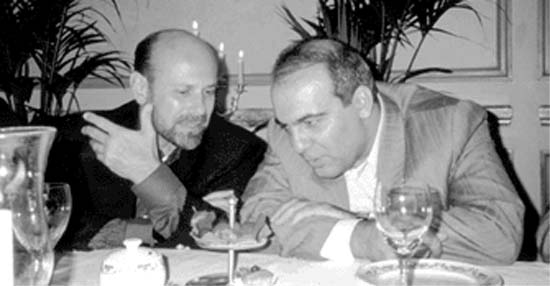 One of the hostages held in the American Embassy in Teheran was RPCV Barry Rosen. Years later, after 9/11, Mr. Rosen persuaded Teachers College, where he headed the press office, to resume its work of the 1970's in Afghanistan compiling school textbooks for the Ministry of Education.

Afghan students are back, but not the Old textbooks

KABUL, December 29 (Online): A team from Teachers College of Columbia University is writing schoolbooks for Afghanistan as it emerges from years of turmoil and ideological repression. The project is an unexpected consequence of the Iranian hostage crisis, which began in 1979.

One of the hostages held in the American Embassy in Teheran was Barry Rosen, then a young Peace Corps worker, who used his forced detention to learn Persian. Years later, after 9/11, Mr. Rosen persuaded Teachers College, where he headed the press office, to resume its work of the 1970's in Afghanistan compiling school textbooks for the Ministry of Education.

One of the main languages of Afghanistan, Dari, is closely related to Persian so Mr. Rosen, who often dresses like an Afghan here, blends in easily.

"I felt we should return and pick up the work," he said during a recent conversation here in Kabul, the Afghan capital. "Our motives are our history here, and that education is the way to change lives."

"One of our tenets is social justice," added Margaret Jo Shepherd, professor emeritus at the college, also working in Kabul. "The aim of Teachers College is to help poor people and immigrants, and educating Afghans so they can make a difference."

Teachers College left Afghanistan after the Communist coup of 1978, but it was still remembered in Kabul and was welcomed back this year by a Ministry of Education floundering with outmoded teaching systems and a jumble of textbooks. Children have returned to school in huge numbers since the repressive Taliban government ended three years ago, highlighting gaping deficiencies in the educational system.

The contribution of Teachers College is a small but important part of a multimillion-dollar international drive to revive the education system in Afghanistan. Financed by the United Nations Children's Fund, the Teachers College group is rewriting the curriculum and all primary school textbooks, including language textbooks in four local languages, while introducing a style of teaching new to Afghan teachers and students that encourages student participation.

The new books will replace the outdated texts produced piecemeal in the turmoil of Afghanistan's last quarter century of conflict by international aid groups and rotating governments, the last being the Taliban, who were dislodged by American forces three years ago.

The Taliban and the Communists before them each had their own ideology to press, and even the University of Nebraska, financed by the United States government, produced textbooks for Afghanistan during the Soviet occupation that are now frowned on because of their religious themes and warlike content.

"This curriculum is free of ideology," Abdul Nabi Wahidi, of the Ministry of Education, said of the new books. "We just have two ideas, peace and stability, and human rights."

For the team from Teachers College, this work is painstaking but often an amusing and rewarding experience, and one that requires constant improvisation.

Mr. Rosen, who worked on the religious studies textbook, questioned, for instance, whether primary school boys really needed to learn how to clean their beards during religious ablutions. He lost that argument, so central is the ritual to Islamic practice, but the item was moved to the bottom of the lesson.

In fact, he found an unexpected readiness from the mullahs at the Ministry of Education to allow ethical questions to be addressed in stories and to experiment with new methods to motivate students.

"We are happy to get rid of our old systems and willing to have a new method to make it easy and interesting for students," said Muhammad Baqir Jaffari, one of the Afghan authors. "We want that."

Mr. Rosen and his team have already tested the textbooks at some local schools, bringing to teachers and students methods wholly new in a country used to rote learning. The new books encourage Afghan students to think and take part in a new way.

"This will make the students work," said Mr. Wahidi, an enthusiastic convert to the idea of student-centered lessons. "That's why we changed the system. Our curriculum was very old, and we wanted to change."

Life skills, one of the most provocative new subjects here, is aimed at helping Afghan children deal with the horrors and difficulties of their war-ravaged society, said Trina Satar Mohibzada, an Afghan teacher of 20 years who wrote the textbook on the subject.

"The idea came from our community - because of the fighting and the war, we were concentrating on how to survive and not thinking how to learn," she said.

Professor Shepherd emphasized that in writing the various texts, "to create something that is authentic takes incredible attention."

"We aren't trying to create a Western educational revolution here," she said. "We want it in a way that helps the Afghans." Good textbooks will help both students and teachers, she added.

James Kennis, a doctoral candidate at Columbia and author of the math book, is using pebbles and sticks for group exercises, guessing that many schools will have no pens or paper or even chalk. Yet it was going to demand a "huge leap" for teachers to adopt new ways, Mr. Kennis said.

Susan Wardak, an Afghan who returned from Canada for the project, has scoured books, magazines and the Afghan street for ideas to illustrate the books in ways meaningful for Afghan students.

The school principal at the Ambuhaq district school, where two books were field tested in November, complained that a book used a photo of a girl whose veil had slipped off, saying that it would allow critics of girls' education to tell people that sending their girls to school will make them lose their religion and culture. Ms. Wardak had just used a snapshot taken by her husband, and suitable hand-drawn illustrations would replace the photo, she assured the principal.

Even when tradition does not intrude, the task of educating Afghans is immense. As the often quoted success story of Afghanistan goes, 4.8 million children were enrolled in school before the winter break, more than ever before. Yet the high numbers are misleading.

"Education really is in terrible shape, from preparation of teachers to quality of school buildings," Professor Shepherd said. "Numbers of children going back to school does not tell the story."

The Columbia team has so far produced 11 textbooks in four of the local languages - Pashtu, Dari, Uzbek and Pashai - to be printed and distributed for the next school year, which begins here in March.

But the team has been slowed by a lack of money. It currently relies on Unicef for a $1 million budget, a minute proportion of the $150 million being spent by the United States on education programs here in the past year. An additional $60 million is expected from other donors over several years.

Even that money is not equal to the challenge, educators here say. Seventy-one percent of the population is illiterate -including 92 percent of rural women - according to Unicef's latest figures.

Many children are behind in their schooling after years of war and Taliban repression, and 40 percent of children - 63 percent of all girls - still do not go to school. Even more debilitating for the system, 80 percent of the 105,000 registered teachers have no formal training. About 40,000 more teachers are needed.

Some children interviewed in villages said they spent only two hours a day in class, and teachers are so poorly paid that they are often absent, working at a second job, students and teachers say.

Morale among teachers is low, and is not helped by the fact that some have been teaching for their third year in tents or in the open.

Despite millions of dollars put into building schools over the last two years, the international effort has only touched on the damage done in 25 years of war. Eighty percent of the country's 7,000 schools were damaged or destroyed, and 3,400 schools are still waiting to be rebuilt, according to the Ministry of Education.

"Even if you have the funding and the international commitment, that is going to take another eight to nine years," Mr. Hossaini said. "Can you tell a child who is 5 now to wait eight years before he gets to go to school?"

The new minister of women affairs of Afghanistan, Masouda Jalal, says she needs cooperation of the public health and education ministries in order to deal properly with the problems women are suffering.

Women in Afghanistan are mostly uneducated, or ill-educated, and lack basic health facilities, especially in the countryside.

Ms Jalal, the sole woman candidate in the recent presidential elections, told Pajhwok on Sunday December 26, her second day in the new office, that she will soon specify her priorities for the job, which will be practical in approach.

The 41-year-old paediatrician faces twin challenges of improving the education and the health of Afghan women, who still mostly live in a dire situation. Maternal mortality is on the increase in Afghanistan, while nearly 90 percent of women are illiterate.

"We must endeavour to provide what women need and to upgrade their political knowledge, ensuring they get their rights according to the constitution and their participation in all parts of life," Ms Jalal said.

Some of the ministry staff, who had just greeted their new boss, want changes in its reforms policy.

"Previously, Ms Sarabi (Jalal's predecessor) did not even pay a visit to her personnel once a year, and all the staff did not enjoy equal rights," Samira Samir, a ministry worker told Pajhwok. She complained that they did not get bonuses when staff of all other ministries received them.

She asked Ms Jalal to see her staff first and learn about their problems.

Others complain of 'poor' achievements of the ministry under Habiba Sarabi.

Qudsia Wahab, a female teacher at the Zarghona High School in Kabul, said that the ministry during its past period did not achieve any valuable work for women, other than distribution of sewing machines and donated clothes.

For her part, Ms Sarabi blamed the problems like those mentioned on what she called recommendation-based employment in the ministry.

"We were weak in some works of the women affairs ministry, and the reason was employment of some persons who were recommended to us due to advice, and were always aggressing on me to impede my job," the former minister of women affairs said.

However, Safia Sediqi, head of the women's affairs in the rural rehabilitation ministry, rejects Sarabi's excuses. "I think this reason of Ms Sarabi is not logical because an individual can not hurdle progress of work of a minister."

She also said that the ministry should have to pay most attention to the women in rural communities as, she said, 80 percent people live in villages. It should improve education there by assessing the situation and reporting to the education ministry.

The new minister was born to a textile worker father and a mother who is a writer, in northern Kapisa province. She studied psychiatry at medical school in Kabul.

Ms Jalal switched to paediatrics after the school's mental health faculty was shut during the civil war in the 1990s. She was treating children when the Taliban came to power in 1996 and forbade women from work.

Since then she has been working as a health consultant with the United Nations and practicing as a paediatrician.

This story has been posted in the following forums: : Headlines; COS - Iran; COS - Afghanistan; Service