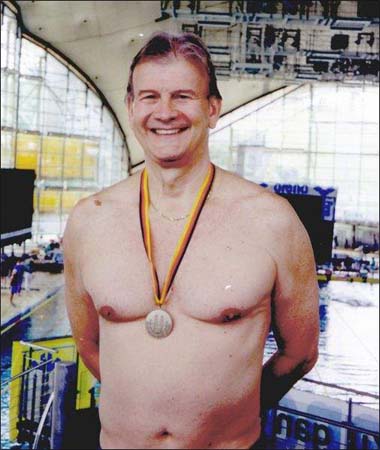 Artist captures medals on land, in water
By FRANCINE MILFORD

francine.milford@heraldtribune.com
Emerging from a family of swimmers and artists in Michigan, David McIntyre has spent his life pursuing both pastimes while working in a variety of professions.

While 13 of McIntyre's paintings are currently on display at the Artemesia Gallery, 219 W. Venice Ave., Venice, and he begins work on his 70th painting, much of his time is spent in the water, training for international competition.

With a time of 35.64 seconds, McIntyre came in second behind first-place winner Peter Bergengren from Sweden, in the 50-meter short-course backstroke for men in the 65-69 age group at the World Masters Championship in Germany last year.

"That time is only one second slower than what I did in college," said McIntyre, who earned an athletic scholarship to the Detroit Institute of Technology.

After college, McIntyre taught in Jamaica working with the Peace Corps. Later he became a school vice principal in Hawaii. Surrounded by water, McIntyre spent most of his days swimming in the beautiful island waters.

In July, McIntyre will represent the United States when he attends the World Masters Championship in Canada.

"I will be competing with the best swimmers from around the world," he said. "There should be some 7,000 competitors attending this event." Through his swimming, McIntyre discovered a passion for competition.

"I love to compete," he said. "It's the practicing that is such a drudgery."

McIntyre has become a regular at the Evalyn Sadlier Jones YMCA in Sarasota where he practices swimming three times a week.

"I have been working with weights for more than 20 years now. I feel that I am stronger now than when I was in college," said McIntyre, who owes his successful swimming times to a strong upper body and new swimming techniques.

He said he hopes that as people get older they too will find satisfaction in action in artistic and athletic pursuits, as he has.

"I just want to get people to stay active, both physically and mentally," he said.

This story has been posted in the following forums: : Headlines; COS - Jamaica; Sports; Swimming; Art; Awards