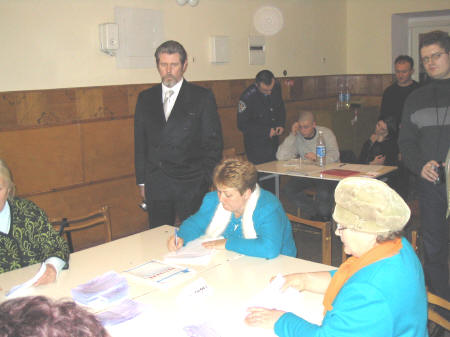 Caption: Trey Aven, far left, was on hand as an observer for the Ukraine's recent elections. Courtesy photo

DOVER — A local college educator who traveled to the Ukraine to monitor that country’s historic special presidential election called his visit an "incredible experience."

Trey Aven, who is McIntosh College’s dean of design and technology, was an official observer for the Dec. 26 election that saw opposition leader Viktor Yushchenko defeat the country’s prime minister.

Aven went to the Ukraine as an observer through the Ukrainian Congress Committee of America — a New York-based nonprofit organization representing interests of Ukrainian immigrants.

"What I found was they were very serious about having this election done correctly," Aven said in an interview following his return to Dover where he lives.

Aven, who speaks Russian and Ukrainian, arrived in the Ukraine on Christmas Eve with observers from the United States, Canada and Australia.

Aven was told the observers had to be accountable, reliable and objective "in order to further the cause of democracy."

"The entire world will be watching what will be happening and that we were considered the guardians of democracy," he said.

Even though it’s a volunteer position and observers must pay for their trips out of their own pockets, that didn’t change Aven’s decision to play his part in Ukraine’s democracy-making process.

Citing massive fraud, the Ukraine supreme court ordered the special election after voiding results from the original runoff on Nov. 21 and revoking the victory of Prime Minister Viktor Yanukovych, according to The Associated Press.

Following the Nov. 21 election, thousands of voters took to the streets, protesting possible irregularities and demanding a rematch.

The country was initially looking for 330,000 observers for each precinct but only 12,000 arrived.

That meant Aven and other observers had to shuttle between various precincts to oversee voting places.

Aven, who worked in the Ukraine as part of the Peace Corps and later served as an information specialist for the U.S. Agency for International Development in Chisinau, Moldova, praised the outcome of the special election.

He predicts the Ukraine will be a "very different democracy," one more comparable to the early days of the United States.

This story has been posted in the following forums: : Headlines; COS - Ukraine; Election Observers