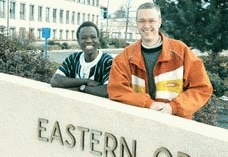 Caption: NOTEWORTHY ASSIST: Doctor Abio Ayeliya, left, of Ghana, is able to attend Eastern Oregon University because of help he is receiving from Izaak Edvalson, right.
The Observer/DICK MASON

LA GRANDE -- Snow hugs the ridges above town and wind whips through the neighborhoods, but when Izaak Edvalson opens the front door, warmth spills from his salmon-pink cottage on First Street.
Dinner is nearly ready, and it doesn't smell like anything on the menus downtown, where restaurants sport beefy, cowboy-country names such as the Elkhorn Steakhouse & Lounge. As Edvalson returns to the stove to stir the kelewele -- plantains fried with hot peppers -- his roommate, Abio Ayeliya, puts the finishing touches on peanut-chicken soup he'll serve with an Americanized version of African Tuo Zaafi, similar to dumplings.

In La Grande, the dinner fare seems unlikely. But then so do the circumstances that brought Ayeliya, a perilously poor Ghanaian farmer's son, to enroll in a university nestled between the Blue Mountains and the Wallowas -- and that motivated Edvalson, an Oregonian with scant means of his own, to pay for his friend's education and to persuade others to help.

Izaak Edvalson paid attention during his Peace Corps orientation in 1999: Don't let villagers into your home. Retain your privacy. Share your knowledge, not your possessions.

The freshly minted Eastern Oregon University graduate stuck to the rules when he moved into a two-bedroom bungalow in Chiana, a farming village in northeastern Ghana, where he taught secondary school until 2001. Like the villagers, he got by in the sweltering, arid climate without electricity, running water or indoor plumbing.

He'd come out to play with the children when they'd peer in the windows of his house, hoping for a glimpse of the lanky 6-foot-2 American, his stature, pale skin and blond hair such curiosities. But he wouldn't hand over his calculator, camera or pens when the children or adults asked for them, even though he understood that in their culture, people share everything.

One young villager, though, was different.

Abio Ayeliya was 17 or 18, and the first day he stopped by Edvalson's house, he wanted only information. He asked the teacher how life in the United States differed from village life. They talked.

"So that night," remembers Ayeliya, whose friends call him "Doctor," "I decided to share my food with him, and he ate it.

"Then, every night I went and sat with him and learned about American culture."

In return, Ayeliya helped Edvalson haul water for a tree-planting project at school, worked in the American's garden and helped build a wall around it to keep livestock and wild animals out. As the corn and beans grew, so did their friendship.

Seven teachers had charge of 130 students in the 10th, 11th and 12th grades. But often, Edvalson recalls, he'd be the only teacher to show up for school.

Instructors sometimes had textbooks; students never did. Children who wanted desks had to bring their own. And though the school didn't have accommodations for boarders, so many students lived so far away and transportation was so scarce that many spent the nights cooking for themselves and sleeping on the school's concrete floor.

Lessons focused on memorizing facts that students would need to regurgitate -- no matter how irrelevant to their lives -- for the country's national exams. They had to memorize computer terminology, for instance, even though they had never seen a computer.

In Edvalson's view, the standard teaching method in Ghana, where English is the official language, resulted in little learning.

Even if it had, he discovered, students from the poor regions had scant chance of continuing in school. Most seemed destined to work their families' meager plots. In Ayeliya's case, his father's farm produced enough millet, rice, beans and guinea fowl to feed his family -- a stepmother and 10 siblings -- for about half the year. The rest of the time, Ayeliya says, "we suffer."

Edvalson began to wonder whether something more might be possible for his new friend.

The first time Izaak Edvalson took a vacation from his Peace Corps post, he returned to find his house had been robbed. The possessions he had failed to share with villagers were gone.

When his second vacation came around, he broke the rules. He asked Ayeliya to housesit.

When Edvalson returned, he invited his student to stay. After all, by village standards, his two-bedroom house was big. His new housemate helped in the kitchen and garden, and they enjoyed each other's company.

Ayeliya never asked for anything, Edvalson says, besides assistance with schoolwork.

Edvalson had another trip to plan. His brother was coming to visit, and he'd meet him at the airport in Accra, the capital, 20 hours away on the coast.

He tucked a note in a pocket, knowing that Ayeliya always checked pockets before he did laundry.

"Whoever finds this," the note read, "wins a free trip to the capital."

Ayeliya never had traveled. He'd never used a flush toilet, been to an airport or seen a jet. He'd never dipped his toes in an ocean.

"The water," Ayeliya says, grinning at the memory, "was salty."

Edvalson's Peace Corps allowance was about $100 a month. But the fellow who once envisioned a future as a good consumer living in the suburbs, driving a sport utility vehicle, enjoying his penchant for electronics, found that in Chiana, he didn't need much. He lived on $50 a month.

As his time in the corps wound down, he had a fine idea for using the money he'd saved. If Ayeliya agreed to repeat three years of secondary education, Edvalson would pay the $200 annual tuition for a superior boarding school, where he might learn enough to secure a more prosperous future.

Edvalson returned to La Grande and did carpentry work before enrolling in a master's degree program at Columbia University's Teachers College in New York. He studied nights, weekends and summers, and during the school year, made about $40,000 teaching at a high-needs school in the Bronx.

There, his thoughts returned to the high-need student he knew best.

Edvalson called Eastern Oregon University. What would it take, he inquired, for a foreign student to enroll?

International students -- Eastern has 83 this term among nearly 2,000 students on campus -- are required to show proof they have enough money for the first year's tuition, fees, books, housing and food.

Edvalson had grown adept at frugality. But living in New York City on a teacher's salary, he didn't know if he could tuck away $15,000. He wasn't even sure he wanted to try.

Before he knew it, though, saving money became a game. Each week, he remembers, he'd strive to save more than he had the week before.

In a letter, Edvalson asked his African friend -- the first in his family to complete secondary school -- if he'd like to go to college in Oregon.

The 23-year-old freshman, an adept public speaker who frequently breaks into a broad smile, is still learning his way around computers. He was up late making sure every detail of his presentation would dazzle.

After all, so much has dazzled him in the four months since he stepped off an airliner in New York, where Edvalson gave him a hurried tour before the two traveled to Oregon in time for September's first day of classes at Eastern.

For him, La Grande feels as foreign a place as he could have imagined, from the curious sound of studded winter tires grinding on pavement to the surprise he felt the first time he walked by someone who failed to return his greeting. In Ghana, he says, even strangers greet one another because "the future is unpredictable."

Now, after four months, professors, administrators and new friends wave, smile and stop to shake his hand at every turn as he travels the campus halls and courtyards. Apparently, the Ghanaian way is rubbing off.

In the back of the classroom, Edvalson trains a video camera on his friend, capturing his classroom success. Ayeliya, who wants to major in business and return to Ghana to help his family and countrymen, earned a 3.86 GPA in his first semester.

He has a long way to go.

Edvalson does, too. In addition to the more than $15,000 he's saved on his own to help pay his friend's way through college, the 28-year-old builder and solar-power advocate, who sports a shell necklace and a nose ring, has raised $10,000 from individuals and groups, including $1,000 that the La Grande High School Spanish Club collected with an auction. He solicits donations on a Web site: http://wolongope.com.

Next year, he'll help Ayeliya apply for scholarships. And he'll continue to suggest to friends, family and strangers that by investing in one man's education, they'll really be investing in much more.

At the front of the classroom, Ayeliya clicks onto an image of the Ghanaian flag, with its bold red, yellow and green horizontal stripes topped with one black star.

That star, he tells his classmates, "represents the hope of Africa."

This story has been posted in the following forums: : Headlines; COS - Ghana

I am EUGENE OBENG WIAFE, a good friend and a co-teacher of IZAAK EDVALSON, a RPCV during 1998 in GHANA and would like to re-establish contact.my e-mail is ginokriss@yayoo.com