Venezuela RPCV Alberto Ibargüen has been elected by the trustees of the John S. and James L. Knight Foundation 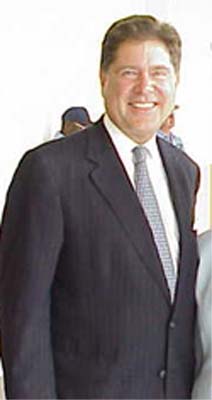 Venezuela RPCV Alberto Ibargüen has been elected by the trustees of the John S. and James L. Knight Foundation

MIAMI, Fla., Jan. 28 (AScribe Newswire) -- Alberto Ibargüen has been elected by the trustees of the John S. and James L. Knight Foundation to succeed Hodding Carter III as president and chief executive officer.

Ibargüen is publisher and chairman of The Miami Herald, which won three Pulitzer Prizes during his tenure, and publisher of El Nuevo Herald. He has been a newspaper executive since 1984, first at The Hartford Courant, then at Newsday in New York before joining Knight Ridder in 1995. He is chairman of the board of the Public Broadcasting Service (PBS). He is a director of the Inter American Press Association and leads its efforts in the protection of journalists at risk in the hemisphere -- a project fueled by significant Knight funding.

At Knight, Ibargüen will be at the helm of one of the nation's largest private independent foundations. With assets of $1.9 billion, the foundation makes grants of more than $90 million annually to promote excellence in journalism worldwide and invest in the vitality of 26 U.S. communities where the Knight brothers operated newspapers. Ibargüen is a member and past chair of Knight's Miami-Dade/Broward Community Advisory Committee.

"Alberto Ibargüen is a recognized leader with interests that are a perfect match with those of the foundation," said W. Gerald Austen, M.D., chairman of Knight Foundation's board of trustees. "Hodding Carter helped us plan a smooth transition by telling our board more than a year ago that he would like to retire after eight years here. He has given Knight Foundation, the community of journalism and the field of philanthropy visionary and superb leadership. He has been a gifted communicator about the power and promise of philanthropy and the need to help the neediest of the needy among us."

"It is heartening that after an extensive national search we have found in Alberto Ibargüen a successor who not only is eminently qualified but who already has an extensive relationship with the foundation," Dr. Austen said.

As Herald publisher since 1998, Ibargüen has led a business revival that has made the newspaper among the most successful in the industry. In addition, he serves as a director of the Committee to Protect Journalists; a trustee of the University of Miami; a member of the Trustees' Council of the National Gallery of Art; the Council on Foreign Relations; and on the boards of overseers of the journalism school at Columbia University and the law school of the University of Pennsylvania. He is past chairman of the Florida Philharmonic Orchestra and has served on the boards of Wesleyan University, Smith College, Lincoln Center for the Performing Arts and the New York Community Trust.

He is a graduate of Wesleyan University and the University of Pennsylvania Law School. Between college and law school, he served as a Peace Corps volunteer in Venezuela and as program officer for the Peace Corps in Colombia.

Carter, an award-winning journalist and commentator, became Knight's president and CEO on Feb. 1, 1998. During his tenure the foundation's assets increased from $1.2 billion to $1.9 billion and its annual grants payments went from $42 million to more than $90 million.

Under Carter, Knight heightened the impact of its grant making by increasing funding to the foundation's signature journalism program as well as expanding its commitment to the 26 Knight communities.

While at Knight, Carter has displayed high-profile leadership in his efforts to communicate the value of philanthropy, marked by his inclusion for the last three years in The NonProfit Times' Power and Influence Top 50 list. He helped retool the National Community Development Initiative into Living Cities, an urban development consortium of foundations, private financial institutions and the Department of Housing and Urban Development working in 23 U.S. cities. He is a founding partner of the Florida Philanthropic Network, a coalition of Florida's leading grant-makers seeking to advance philanthropy in the state.

The John S. and James L. Knight Foundation promotes excellence in journalism worldwide and invests in the vitality of 26 U.S. communities. Knight Foundation, named for its founders, is a private foundation completely independent from Knight Ridder.

This story has been posted in the following forums: : Headlines; COS - Venezuela; Journalism; Publishing