Alfred "Bankie" Mansaray moved in with Sierra Leone RPCVs Rich and Dana Wekerle. Her eyes welling with tears, Dana Wekerle looked at the young man and replied: "We now have a son." 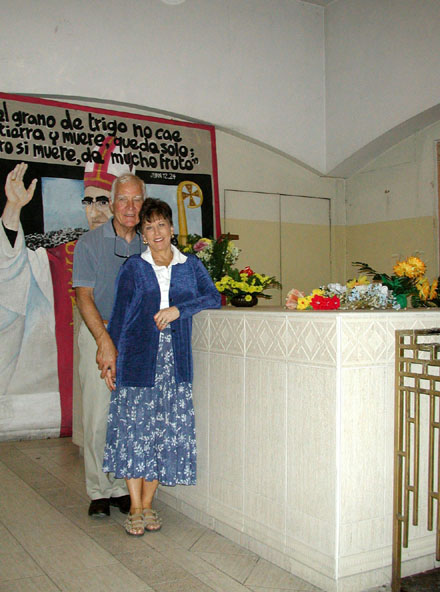 Alfred "Bankie" Mansaray moved in with Sierra Leone RPCVs Rich and Dana Wekerle. Her eyes welling with tears, Dana Wekerle looked at the young man and replied: "We now have a son."

Caption: Rich & Dana on their vacation to Nicaragua/Hondurus & El Salvador. This photo was taken at the final resting place of Bishop Oscar Romero who was brutally murdered while presiding at Mass in San Salvador, El Salvador. His murder was committed by persons trained at the US School of the Americas located at Ft Benning, Ga.

Thousands of miles from his homeland, the young man who survived the brutal civil war in Sierra Leone came to the Palouse and discovered his childhood.

Never before had Alfred "Bankie" Mansaray seen a photo of himself as a little boy. But he immediately recognized his own face on the wall of framed photographs inside the home of Rich and Dana Wekerle. He was spellbound to find images of his brothers, childhood playmates, the remote village where he was born.

Captured on film 15 years ago by the Wekerles, who served as Peace Corps volunteers in Sierra Leone, the photographs harked back to times when children still could play outside without being shot and when Mansaray's older brother, Abu, was still alive - those last few years before war and the outbreak of violence and death.

Mansaray, now 22, was one of two dozen boys who visited Rich and Dana Wekerle every day during the three years they lived in Sierra Leone.

The Wekerles never forgot those children. They grew so fond of them that even after the couple returned home, the children's photographs hung on their walls along with pictures of their own sons and other relatives. The Moscow couple continued to worry about those boys, wondering if they had survived Sierra Leone's decade- long civil war, which resulted in the deaths of tens of thousands and the displacement of more than 2 million people.

Little did they know that one of those children would indeed grow up, survive the war and embark on an epic journey - a trip that ended earlier this year when he moved into their home.

It all began in 1986, when the couple joined the Peace Corps and left for West Africa. Rich Wekerle was almost 50, a Marine Corps veteran and a retired New York City firefighter. Dana Wekerle was in her early 40s, a financial consultant who wore suits and high heels to work every day.

They were assigned to Kabala, a village of about 5,000 with dirt roads and where electricity and running water were considered luxuries.

The Wekerles lived on the outskirts of town, in a house with a tin roof and woven mats for ceilings.

On the day they arrived, hundreds welcomed them with music and dance while huddling around their house and gawking at the white, American couple. Soon after, 4-year-old Mansaray, his older brothers and many of their playmates began a tradition of visiting the Wekerles after school, right when the couple came home from their Peace Corps assignment of digging water wells - a project funded by the United Nations and the European Community.

They would spend hours with the kids - playing card games like Uno, teaching them English, sharing toys from the United States that included Matchbox cars, puzzles and other colorful knickknacks that the youngsters had never seen before.

Mansaray's older brothers helped the Wekerles around the house. Abu drew water from the well and hauled it to their home almost every day. Bombalia often carried Rich Wekerle's tripod as he documented their life in Sierra Leone.

Mansaray remembers how Rich Wekerle would let his brother ride along on the motorbike, but he wasn't allowed since he was too small. He has fond memories of attending "Dana school" in the afternoons and of how the couple would buy all the boys a pair of shorts and a T-shirt at the village market every Christmas. They also helped pay the fees so he could attend primary school, he recalled.

Respected by the villagers, the Wekerles accomplished a great deal during their three years in Kabala. Besides the water wells, they applied for grants and were able to facilitate the building of a church and school for the blind.

"Those were the best three years of our life," said Dana Wekerle. "They had nothing. They were poor. But you never met kinder people."

When the couple returned to the United States in 1989, many in the village mourned their departure, Mansaray recalled. Other Peace Corps volunteers came to Kabala, but they were never loved as much as the Wekerles, he said. "Even now, people still look up to them," said Mansaray. "Everyone still talks about Rich and Dana. When they left, things were not the same again."

Those were golden years, not just for the Wekerles, but for many in Sierra Leone. War between the rebels and the government broke out just two years later and no one was immune from the atrocities. Human Rights Watch and other organizations documented countless abuses, including rape, murder, mutilation, forced labor, massive looting and the training of child soldiers.

Mansaray was 9 years old when the rebels attacked his village in 1994. He was bathing in the stream, he recalled, when he suddenly heard gunshots. He ran for the hills along with other children, looking for a place to hide.

He staggered back to the village the next day and found his brother's body on the dirt road toward home.

"I will never forget what I saw," said Mansaray, his voice quivering with emotion.

Abu's hands had been tied behind his back, he said. He was covered with blood and barbed wire. A gash on the back of his head indicated he had been struck with a bayonet. Abu was tortured and killed probably because he had refused to fight for the rebels, said Mansaray.

As the civil war raged on, Mansaray moved to Freetown, the capital, when he was 14. Families were torn apart and like many children, he had little contact with his mother, father and seven surviving siblings. In 1999, Mansaray fled to nearby Ghana, where he registered with the United Nations High Commission for Refugees and lived in a camp with others from Sierra Leone. He managed to finish high school and attend the University of Ghana for one year.

"I consider myself blessed," said Mansaray, listing the names of his childhood friends who died or were raped or captured by the rebels and forced to fight. "It's hard to explain what happened to us. No one really had a choice."

After the Peace Corps, Rich and Dana Wekerle moved to Moscow, where they built a home and where Dana got an MBA at the University of Idaho.

"You're never the same person when you return," said Dana Wekerle. "Being in the Peace Corps was a huge growing period."

They started an international business club at the university and encouraged students to study abroad and learn more about other cultures. Their vacations were spent volunteering in Mexico or visiting countries such as Egypt, Nicaragua and El Salvador.

The couple also grew more committed to issues of peace and justice.

In 2003, Rich Wekerle chose to become a prisoner of conscience by stepping on to the Army base at the School of the Americas in Fort Benning, Ga., an institution that activists say has been connected to half a century of atrocities and terrorism in Latin America. He and 26 others were arrested for trespassing during a protest.

He probably would never have chosen to become a prisoner of conscience if it hadn't been for his experience in the Peace Corps, said Rich Wekerle. He did both for the sake of solidarity.

"You give people hope that someone cares and that things are going to get better," he said.

Rich Wekerle was sentenced to six months at the federal prison in Sheridan, Ore. He was released last October.

While Rich Wekerle served out his prison sentence, Mansaray was granted asylum to the United States by the UNHCR.

The Wekerles had been in contact with his brother, Bombalia, in Freetown, who got ahold of Mansaray while he was still in Ghana. He told his brother to contact the Wekerles when he arrived in the United States.

Dana Wekerle was so surprised last fall to receive an e-mail from the boy she hadn't seen since he was 6 years old. They talked on the phone several times and they asked him to come and visit at Thanksgiving.

It was during that visit that Mansaray saw those childhood photos for the first time, along with 2,000 other slides that Rich Wekerle took in Sierra Leone. He was touched that the couple had remembered him and his family after all these years - that despite time and distance, they were still part of their memories, thoughts and prayers.

In January, Mansaray moved in with the Wekerles. He's now a sophomore majoring in international studies and political science at the University of Idaho and also has a custodian job at the school. Recently, he has been able to make long-distance calls to West Africa and speak to his father, mother and brother, Bombalia, whom he hasn't seen in six years.

While he misses his family in Sierra Leone, Mansaray is grateful to be reunited with the Wekerles. "This is my family, too, right here," he said.

Her eyes welling with tears, Dana Wekerle looked at the young man and replied: "We now have a son."

This story has been posted in the following forums: : Headlines; COS - Sierra Leone; Service