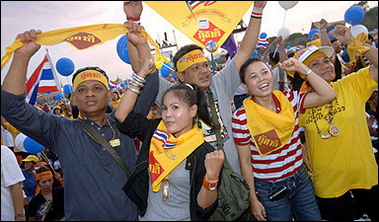 "Suddenly, the momentum of support that had propelled Thaksin to his huge electoral victory one year earlier changed direction, and earlier problems began to generate negative momentum. Charges of corruption and cronyism began to stick, especially regarding government contracts, as did claims that the thin-skinned Thaksin sought to limit press freedom. In addition, frustration mounted over continuing violence in the Muslim-majority provinces of the far south, and the benefits of his pump-priming rural policies began to weaken." Darryl N. Johnson served as U.S. ambassador to Thailand from 2001 to 2004. A former Peace Corps volunteer in that country in 1963-65, he now teaches American foreign policy at the University of Washington.

The surprising fall of Thailand's Thaksin

Special to The Times

Caption: Anti-Thaksin protesters sing and dance to celebrate their success during a rally in Bangkok. Thousands gathered in the shadow of Thailand's royal palace as opponents of Prime Minister Thaksin Shinawatra held a victory rally after forcing him to step aside. Photo: AFP/Bay Ismoyo

Thai Prime Minister Thaksin Shinawatra's announcement on the evening of April 4 that he would step aside came as a major surprise to his friends and foes alike. Despite his party's relative success in the elections of April 2, he faced daily demonstrations and apparently decided that the price for continuing in office was too high.

He said he did not want to see Thailand's political divisions harm the celebrations of the 60th anniversary of the accession to the throne of revered Thai King Bhumibhol Adulyadej in June of this year. He called on the king, perhaps to seek his guidance, before his announcement on April 4.

Thaksin had bestrode the Thai political scene over the past five years like a colossus. His Thai Rak Thai (Thais Love Thais) Party had swept into power in 2001, defeating the incumbent Democrat Party that was saddled with the consequences of the economic crisis of 1997-98. While his party fell a few seats short of having a majority in the Parliament, he was able to draw the support of some smaller parties and independents to form a strong government.

In early 2005, Thaksin became the first elected prime minister ever to complete his term in office. At the same time, he and his party were re-elected with nearly 70 percent of the votes, which translated into an absolute majority of 377 seats out of 500 — another first in Thai history.

How could he have fallen so far so fast? Several factors contributed, some political, some personal. Thaksin was considered brash and arrogant, and was never popular with the Bangkok elite (Thaksin came from a Sino-Thai family in the northern city of Chiang Mai). And he did not play the Bangkok society game.

On the contrary, Thaksin's political strength came from the countryside, especially the poor northeast, where the majority of Thais still depend on the soil for their living. He introduced several programs to help the poor, including virtually free health care, a $20,000 per village revolving micro-loan fund, forgiveness of land debts for three years and a local crafts development program. These programs were sneered at by the urban sophisticates as fiscally unsound and politically driven "populism." But the fact is that these programs succeeded in providing services and opportunities where little or none had existed previously. Thaksin was and remains wildly popular in the countryside.

But he could not overcome the perception of arrogance and corruption, which came to a head over the sale of his family's assets in the Shin Corporation, Thailand's largest telecom company. Before he came to political prominence, Thaksin had built the Shin Corporation into a multibillion-dollar enterprise, and in the process became one of Thailand's richest people.

When he ran for office in 2001, he divested most of his holdings to other family members and close associates. The manner of his divestiture led to charges that he had lied on his financial-disclosure forms, a charge that could have barred him from public office for five years. But the Supreme Court ruled 8-7 in his favor, and he was able to take office.

During his tenure, however, he was plagued by allegations of conflicts of interest between his official government decisions and his private business interests, particularly in the telecom field. He claims that it was in response to these allegations that he and his family members decided to sell their 49-percent share of Shin stock in January, to remove the direct link with the company and to permit reform in the telecom sector to move forward after years of delay.

Whatever Thaksin's motives, however, the result was to infuriate his opponents, especially when it came out that the stock sale was structured in such a way as to result in a virtually tax-free windfall of $1.9 billion for his family. The fact that the buyer was the investment arm of the Singapore government added to the public antagonism generated by the sale.

At that point, the small weekly anti-Thaksin demonstrations, organized by his one-time friend turned opponent, newspaper tycoon Sondhi Limthongkul, grew and intensified. This version of "people power," however irritating to him, would never have toppled Thaksin without the much larger and more vocal demonstrations that followed the revelations about the stock sale.

Suddenly, the momentum of support that had propelled Thaksin to his huge electoral victory one year earlier changed direction, and earlier problems began to generate negative momentum. Charges of corruption and cronyism began to stick, especially regarding government contracts, as did claims that the thin-skinned Thaksin sought to limit press freedom. In addition, frustration mounted over continuing violence in the Muslim-majority provinces of the far south, and the benefits of his pump-priming rural policies began to weaken.

To try to squelch the demonstrations and to renew his mandate, Thaksin called snap elections for April 2. The three main opposition parties, recognizing their weakness, decided to boycott the elections. With no opposition, Thaksin was assured of a large victory — except for two provisions of the constitution: One specified that in order for the vote to count, the winning candidate must have the votes of at least 20 percent of the eligible voters; the other required that all 500 seats in the Parliament be occupied in order for that body to open and to choose a prime minister.

Thaksin's party gained 57 percent of the popular vote, but 38 constituencies failed to reach the 20 percent threshold because of the large number of "no" votes, and one constituency had no candidate. New elections will have to be held for those seats until they are filled. Thaksin evidently felt that the cacophony had become too loud, while the prospect of a political compromise was beyond his reach.

What now? Thaksin said he would preside as a caretaker prime minister for 30 days — or less, if a new Parliament can be convened sooner. He has not groomed any obvious successors, but several members of his party would be plausible candidates, including Commerce Minister Somkid Jatusripitak. In the unlikely event that the Democrats were to draw enough TRT defectors and others to form a coalition, they have an attractive leader in Abhisit Vejjajiva. It is also possible that the leader of the opposition group and Thaksin's former mentor, Chamlong Srimuang, or elder statesman Anand Panyacharun, who served twice before as prime minister, could be called upon to form a unity government.

Meanwhile, Thaksin Shinawatra is likely to remain a force in Thai politics and to play a role in the background. How far in the background may be tested in the coming months. But for now, he will be remembered as one who reached the pinnacle of political status by showing ambition and power — perhaps too much ambition and power in a society that values conciliation and harmony.

Darryl N. Johnson served as U.S. ambassador to Thailand from 2001 to 2004. A former Peace Corps volunteer in that country in 1963-65, he now teaches American foreign policy at the University of Washington.

This story has been posted in the following forums: : Headlines; COS - Thailand; Politics