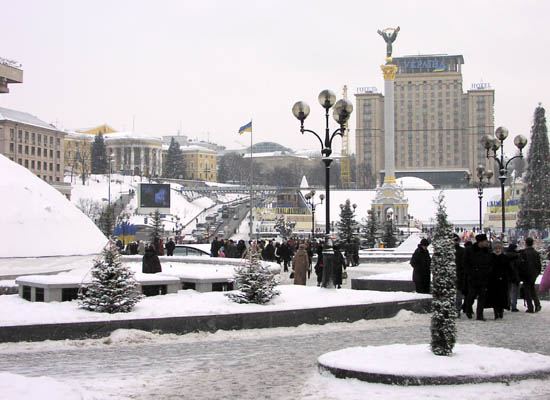 In late January, we had temperatures ranging from minus 5 to minus 13 degrees Fahrenheit for several days. One morning, my Ukrainian colleague called to say I shouldn't come to school because of the cold. All of the other teachers would be there. There was no way I was going to be the American who wimped out because of a little chilly weather! Besides, what if it got colder? We were still in the first month of the semester, and winter was far from over.

An American in Ukraine

Ukraine has the largest number of Peace Corps volunteers serving in any country. Many teach English in public schools and universities, while others specialize in business or youth development. A new group of volunteers arrives in Ukraine every six months.

Today in one of my eighth-grade English classes I confiscated two cell phones, handed out half a dozen failing grades, made one student stand at his desk for part of the lesson, and sent another student out of the room. I'm a Peace Corps volunteer in Ukraine, but today I felt more like a drill sergeant than a peacemaker.

Nearly a year ago, when I applied to be a volunteer, I had no idea which country I'd land in. What would life be like without the technology and infrastructure I'd enjoyed in the United States? In the middle of the night, I would wake up and worry about bucket baths, long treks to an outdoor toilet, weeks of eating nothing but yams or a once-a-month call to the States on a battered pay phone.

These turned out to be warrantless fears. Instead, my greatest enemy here is the cell phone, a superstar of technology and infrastructure.

In Ukraine, the average teacher earns between $90 and $100 a month. Very few of my students can ever hope to visit an English-speaking country, or any other country, besides perhaps Russia or Poland. As one teacher told me, "Ukrainians don't live. They exist." But as I stand at the blackboard attempting to make grammar interesting, my students are slyly punching away at flashy phones that cost from $100 to $400.

Despite this irony, I admit I'm enthusiastically part of the craze. Four months ago, when I came to Ukraine, I had never owned a cell phone. Now I've convinced myself that staying in touch with other volunteers and stateside friends and family is essential to avoiding bouts of loneliness and depression. But my phone is woefully uncool compared to my students'--no color graphics, camera or MP3 player.

However, life in Ukraine is not about being cool in my students' eyes.

It's about wearing at least three layers, being married and having kids.
Coping with the cold

In late January, we had temperatures ranging from minus 5 to minus 13 degrees Fahrenheit for several days. One morning, my Ukrainian colleague called to say I shouldn't come to school because of the cold. All of the other teachers would be there.

There was no way I was going to be the American who wimped out because of a little chilly weather! Besides, what if it got colder? We were still in the first month of the semester, and winter was far from over.

I dressed in long underwear, knee socks, two pairs of pants, a shirt, two sweaters, a fur coat, fur-lined boots and gloves, a hat and a wool scarf.

I moved toward the door, but was intercepted by my ever-vigilant host mother. I got the Ukrainian pat-down, in which clothing is fingered and fussed over to determine the number of layers. The coat, scarf and gloves came off. (Part of being a volunteer is feeling like a child, as if you don't know how to dress yourself or speak in complete sentences.)

My host mother tied a wool shawl around my chest and meticulously rewrapped me while smoothing, poking and murmuring.

Descending the stairs of our flat block, I felt like a mummy. My eyelashes collected icicles and began to freeze shut as I leaned toward school, but I arrived with all digits intact.

Attendance was so low that we all went home after a few lessons.

Because nearly all children walk to school, snow days don't exist in Ukraine, but school was canceled for three days due to the big freeze. The school director said it hadn't been this cold in a decade.

My host mother kept the oven lit with the door open to supplement our gas-fueled radiators. When I admitted that I was planning a day trip to Kyiv [Kyev], the capital, the next day, she gave me a dark look.

"It's cold!" she said. I could see visions of a frostbitten Rita multiplying in her head. She and her neighbor anxiously tried to convince me to stay home. Fewer buses were running in this sort of weather and I might stand outside forever waiting for one.

I later woke up in the middle of the night feeling sick. Though I quickly recovered, I didn't go to Kyiv in the morning. I lay in bed.

I'm single, but since I've come here, I think it wouldn't be a bad idea to make up stories about my "husband." It's not because of the men, though. It's because of the women.

When I meet someone new--for example, a colleague--the first question is often, "Aren't you cold?" or "Is your flat warm enough?" I always assure the questioner that I'm quite toasty, which means the next 10 times I meet her, she'll ask if I'm cold and if my flat is warm enough. The questions continue.

When the new acquaintance learns my age, there is concern. Twenty-five and not yet married? Sometimes, despite my resistance, they promise I'll find and marry a Ukrainian man.
Having children

Some Ukrainians believe that if young women don't keep their legs warm or if they sit outside in winter, their ovaries will freeze, resulting in infertility.

I promised her they were fine, which prompted a lecture on the correlation between leg warmth and bearing healthy children. I listened, hesitated, and then decided to tell the truth.

"But it's your duty to God!" she cried, shocked. "Besides, who will take care of you when you're old?"

I pondered this excellent question, recalling that nursing homes will be terribly expensive when I reach old age.

Nevertheless, secretly, when I'm outside and free from the sharp eyes of the babushkas (grandmas), I'm a real rebel.

I look around and do reconnaissance for a flower-print handkerchief and straw broom, the uniform of babushkas.

Then I sit on a park bench and freeze my ovaries.

(Rita Botts will write more about her experiences in Ukraine in future stories.)

SEND QUESTIONS or comments to Rita Botts in care of gwoolf@free lancestar.com.

This story has been posted in the following forums: : Headlines; COS - Ukraine