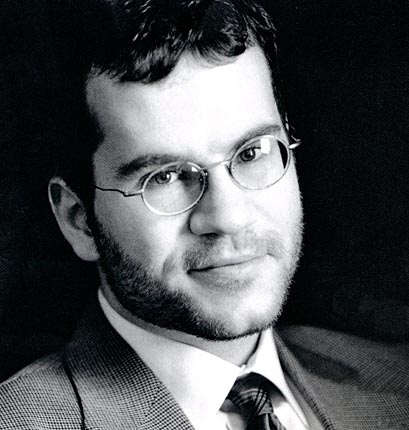 Bissell agrees that his Upper Peninsula roots have an influence on his writing. “Most of my characters are people who have a background in a place that’s small and they’re in a situation now that is often much more than they can handle,” he says. “That’s the big theme of most of the stories in this collection: people realizing how out of their depth they are, and . . . for people who come from small towns, I think that’s a feeling you get hit an awful lot with when you’re in your twenties and late teens,” Bissell says. Author Tom Bissell served as a Peace Corps Volunteer in Uzbekistan.

When I first met Tom Bissell, a writer who The New York Times has described as “not only a subtle craftsman but also a mordant observer of a new generation lost in a complex and dangerous world,” I was amazed that he, like me, was a Yooper.

Bissell lacked the clothing and accent that I typically look for in a Yooper—that is, someone from the Upper Peninsula (U.P.) of Michigan.

He was wearing a tan coat, rather than the Carhartt jacket that is de rigueur for many male Yoopers, and I could not hear a Canadian-esque “eh” tacked to the end of his sentences.

Furthermore, the Upper Peninsula, is geographically isolated in a way that many Yoopers would find Chicago or Detroit: as much of “a complex and dangerous world” as the Central Asia that Bissell writes about.

Even after a semester in Cambridge, I still find myself issuing a silent plea to a higher power whenever I try to cross Mass. Ave.

I grew up in Bark River, a town of 1,000 people, about twenty minutes away from Bissell’s Escanaba, a city with about 15,000 residents.

I studied for calculus exams in the same library where he voraciously read the writers that would later inspire his own work.

Over 800 miles from this library, I find myself with Bissell in Loker Commons, where we talk about his new book, “God Lives in St. Petersburg.” (read the review)

Even though I did not necessarily recognize much of the Upper Peninsula in Bissell’s appearance, I could sense, without being able to explain, its affect on many of the characters in the collection of short stories.

Bissell agrees that his Upper Peninsula roots have an influence on his writing.

“Most of my characters are people who have a background in a place that’s small and they’re in a situation now that is often much more than they can handle,” he says.

“That’s the big theme of most of the stories in this collection: people realizing how out of their depth they are, and . . . for people who come from small towns, I think that’s a feeling you get hit an awful lot with when you’re in your twenties and late teens,” Bissell says.

Bissell himself says he had such an experience when he joined the Peace Corps after graduating from Michigan State University.

“One of the reasons I joined the Peace Corps was sort of to get myself ‘experiences’ so I could be a writer. But I didn’t count on joining the Peace Corps and having a complete nervous breakdown,” he says.

He wrote about his experience as Peace Corps volunteer in Uzbekistan in his critically-acclaimed first book, “Chasing the Sea: Lost Among the Ghosts of Empire in Central Asia.”

In his newest book, American characters in six short stories encounter crises, both internal and external, while traveling in Central Asia.

However, Bissell does not subscribe to the conventional wisdom that a writer should be constrained by his own personal experience.

He adds, “I just try to write characters that are believable within the context of themselves, who seem alive in and of themselves, regardless of any other thing about them, whether they’re white or Asian or black or man or woman.”

Though the stories in “God Lives” take place in Afghanistan and other countries in the region, Bissell says that they should not be read as commentary on America’s influence in Central Asia.

“[My stories are] not analogies for American misadventures—these are stories about what I hope are believable and felt characters that move a person,” he says. “Central Asia is just a way to explore the idea of Americans adrift.”

Bissell, who worked as a book editor in New York before becoming a full-time writer in 2001, is now editing a book he wrote about traveling to Vietnam with his dad, a Vietnam War veteran.

After that, he plans to write a book set in the Upper Peninsula.

“The U.P. is a weird and interesting place in that, as far as I’m aware, it’s a part of the country that’s virtually never portrayed,” he says. “You sort of feel forgotten growing up there.”

The New York Times, therefore, has more to learn about Bissell.

He is not just an “observer of a new generation lost in a complex and dangerous world,” but the voice of a region tucked away from the complexity and danger of the wider world.

—Staff writer Brittney L. Moraski can be reached at bmoraski@fas.harvard.edu.

What is a Yooper? 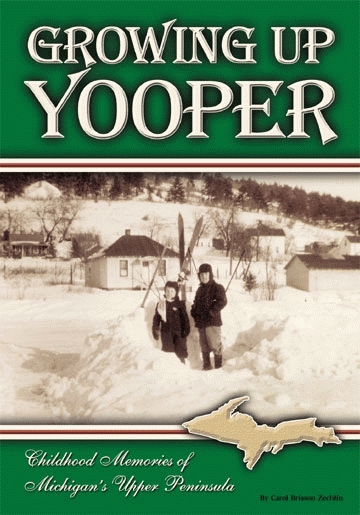 The peninsula is home to 328,000 people, only about 3% of the state's population, living in almost one-third of the state's land area. Residents are colloquially known as Yoopers, (from "U.P.ers"), and many consider themselves Yoopers before they consider themselves Michiganders. (People living in the Lower Peninsula are commonly called "trolls" by Upper Peninsula residents, as they live "Under da Bridge.") This regionalism is not only a result of the physical separation of the two peninsulas, but also the history of the state.

When the Michigan Territory was first established, it only included the Lower Peninsula and the eastern portion of the Upper Peninsula. In 1819 the territory was expanded to include the remainder of the Upper Peninsula, all of Wisconsin, and part of Minnesota (previously included in the Indiana and Illinois Territories). But when Michigan was preparing for statehood in the 1830s, the boundaries proposed corresponded to the original territorial boundaries, with some proposals even leaving the Upper Peninsula out entirely. Meanwhile, the territory was involved in a border dispute with the state of Ohio in a conflict known as the Toledo War. The people of Michigan approved a constitution in May 1835 and had elected state officials in late autumn 1835. Although the state government was unrecognized by the United States Congress, the territorial government effectively ceased to exist. A constitutional convention of the state legislature refused a compromise to accept the full Upper Peninsula in exchange for ceding the Toledo Strip to Ohio. A second convention, hastily convened by Governor Stevens Thomson Mason, consisting primarily of Mason supporters, finally agreed to accept the U.P. for the Toledo Strip in December 1836. In January 1837, the U.S. Congress admitted Michigan as a state of the Union. At the time, Michigan was considered the losing party in the deal because of the apparently less valuable land, but the Upper Peninsula’s rich mineral wealth was soon discovered, and Michigan instead seemed the winner.

It would generally be a misconception to say that residents of the Western Upper Peninsula regard themselves as more part of Wisconsin than Michigan. While the cities and universities of Wisconsin, particularly Green Bay, are more accessible than those of the Lower Peninsula, the typical high school graduate from the UP will likely look first to local universities, and then to the Lower Peninsula schools, rather than to Wisconsin schools. This, of course, has much to do with the fact that a Michigan student would pay the much higher non-resident tuition at a Wisconsin state university than at a Michigan university. While a trip downstate is often rather difficult (A trip from Ironwood to Detroit is roughly 600 miles long, more than twice the distance to Minneapolis and almost as long as a trip to St. Louis), it will still be done often enough. Commonly, people of the Western UP will go to Minneapolis or Wisconsin for trips of pleasure (especially shopping), but they have managed to retain identity with Michigan. Residents of the northeastern part of the U.P. may cross the Sault Ste. Marie International Bridge to Canada more often than they cross the Mackinac Bridge to the Lower Peninsula, and often associate themselves as closer to Northern Ontario. Additionally, although they are not technically a part of the Peninsula, Isle Royale and Mackinac Island are generally regarded as parts of it.

There have been intermittent (and not always serious) calls for the Upper Peninsula to declare independence from the United States; these calls receive little popular support. Only slightly more serious is a movement for secession from the state of Michigan; secessionists propose making the peninsula into the state of "Superior" (named for Lake Superior). The region's economic dependence on aid from the Michigan state government makes such proposals very unlikely to be carried forth.

However, in terms of cultural identity, it may be truest to say that residents of the Upper Peninsula identify far more with fellow Yoopers than with the "trolls" of the Lower Peninsula or the "flatlanders" of Wisconsin.


When this story was posted in March 2006, this was on the front page of PCOL: