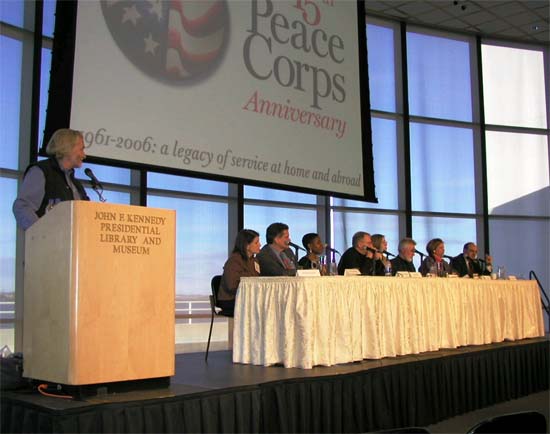 Nearly 400 guests attended the sold-out evening celebration which included a reception, a program saluting the Peace Corps at 45 and a world music dance party. The program saluted the service of returned Peace Corps, the pioneering of the Ghana and Tanganyika 1 volunteers, the promise of 37 new volunteers going to Uganda and the achievements of the recipients of six Kennedy Service Awards, which were made for the first time. Organizers: The Boston Area Returned Peace Corps Volunteers, Inc. and the New England Regional Peace Corps Office are organizing the event. The John F. Kennedy Library and Museum is a co-sponsor.

Greater Boston Celebrated the 45th Anniversary of the Peace Corps

March 9, 2006 - The greater Boston community celebrated the 45th anniversary of the signing of the Peace Corps Act (March 1, 1961) at the Peace Corps 45th Anniversary Celebration on Saturday, March 4, 2006 at the John F Kennedy Library and Museum Boston, Massachusetts.

Nearly 400 guests attended the sold-out evening celebration which included a reception, a program saluting the Peace Corps at 45 and a world music dance party. The program saluted the service of returned Peace Corps, the pioneering of the Ghana and Tanganyika 1 volunteers, the promise of 37 new volunteers going to Uganda and the achievements of the recipients of six Kennedy Service Awards, which were made for the first time.

With the Third Goal Awards, BARPCV continued its tradition of making third goal awards. The process was organized by a committee lead by former BARPCV president Susan Kuder. Natalie Woodward, who was New England Region Peace Corps director and country director in the Dominican Republic, presented the awards to:

Warren & Joan Sawyer, nominated by Heidi Sawyer. Warren Sawyer was Deputy Director of Peace Corps India from 1969-1971, and then Country Director of Iran from 1971-1974. Upon his return to the US, he served on the International Board of Directors for Habitat for Humanity. While this effort was primarily to serve homeless families throughout the world, Warren made lasting contribution in enabling understanding on the part of fellow Americans of the needs for housing internationally, as well as increasing awareness of how US citizens can contribute in meeting those needs. Warren and Joan Sawyer are currently directors and founders of The Caleb Foundation a non-profit involved in affordable housing development and services.

Mike Devlin, nominated by Lori Tsuruda. Mike Devlin served as a Family Health and Nutrition Peace Corps Volunteer in the Philippines from 1982-1984. Among his many contributions as an RPCV, in 1987-88, Mike managed short courses for health professionals on primary health care, health care management, and health care financing for developing countries at the BU School of Public Health. He also is responsible for the founding and expansion of the "Community Connections" employee volunteer program for the Harvard Pilgrim Health Care - engaging 121 volunteers who have assisted more than 177 local charities. These include the generation of nearly $51,000 in disaster relief aid for victims of the 12/04 Tsunami and 9/05 hurricanes, as well as directing drives for food and personal care items for 275 needy kids and 52 formerly homeless elders in Massachusetts.

Timothy Prestero, nominated by Doane Perry. Timothy Prestero served as a Peace Corps Volunteer in Cote d'Ivoire, West Africa from 1995-1997. He was in the Urban Environmental Management Program where he worked as a consulting engineer and project manager for a city public works department. Tim is a co-founder of Design that Matters and the related ThinkCycle Initiative, and for the last three years he has been a lead instructor for the Design that Matters course at the MIT Media Lab. Design that Matters recognizes that the basic needs of 4 billion people in the world - in such areas as clean water, health care, renewable energy, and education - are not being met by the global market. Communities facing these challenges include developing countries, indigenous groups, the handicapped, and the elderly. Stakeholders and NGO'S can articulate these needs, but often lack the technical expertise and facilities to solve them. Local entrepreneurs with innovative solutions often lack the expertise to implement and commercialize them at a large scale.

Afternoon forum 2 on Peace Corps in the 21st Century was a panel conversation about diversity, careers, technology, and development, collaborating with NGOs, domestic service, and engagement of the American public.

Moderator Doane Perry wrote in the program note, “Peace Corps was and is a bold experiment as a socio-political program that gives Volunteers a great adventure and makes them feel at home in the world – to use a few book titles about Peace Corps, some edited by John Coyne on our panel. Over the 40 years since I went to Uganda as a volunteer, I have come to appreciate that Peace Corps has a brilliant design because of the way it works for the volunteer as an experience over time. First you help people in the country of service. Then they get to know you. When you come home, you tell people about the folks you helped and knew. Then there is the 4th goal effect, which is that the volunteer is transformed with a greater capacity to give and to serve and which might not happen until sometime after service.

But Peace Corps is a hybrid that compromises development and cultural exchange programs. The Volunteer profile does not reflect the diversity of America. It is not clear whether and when cell phones and laptops help or hinder the Volunteer. The re-entry to America crisis makes the career path complex for some. Advocacy by about 185,000 returned volunteers and staff have not succeeded in growing the Peace Corps appropriation beyond the low $300 million range [$337 million in the 2007 budget proposal]. [Former director Loret Miller Ruppe used to compare it to the Army marching band and an afternoon at the Pentagon.]”

The forum was a conversation with eight experts about solving these issues going forward. The Moderator’s questions included:

· What should Peace Corps do as a development program?

· What should Peace Corps do to leverage its programs by working with NGOs?

· What is the right mix of information technology for different Peace Corps programs and is Bill Gates correct in saying the cell phone is more powerful than the laptop in distributing technology in the developing world?

· What should Peace Corps do as a cultural exchange organization and at presenting the cultural face of America to the world?

· What impact does PC have on volunteers and their careers?

· How is the Peace Corps community doing at goal 3, engaging Americans in developing countries?

· What is Peace Corps doing domestically and what is USA1?

Guests concluded the forum with comments and questions to the panelists.

For dinner, organizers urged guests to take advantage of Dorchester and South Boston’s many restaurants by providing a list of restaurants, grouped by style, within roughly 5 miles of the JFK Library and Museum, Columbia Point, Boston, Massachusetts.

The Formal Program at JFK Library 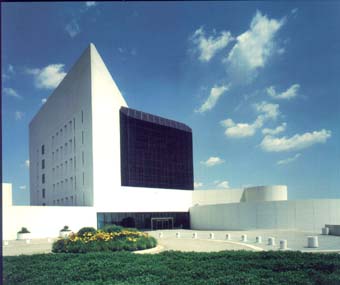 BARPCV is a non-profit 501 (c) 3 organization with employer identification number 04-9036514 and qualifies to receive matching charitable contributions. Gifts are fully tax-deductible to the extent of the law. Proceeds will enable BARPCV to support its small grants program and the Peace Corps Partnership Program.

The Boston Area Returned Peace Corps Volunteers (BARPCV) is a non-profit organization founded in 1978 with about 400 members concentrated in Massachusetts and southern New Hampshire. BARPCV seeks to connect with and support returned and prospective volunteers and to carry out the third goal of the Peace Corps, as stated in the 1961 Peace Corps Act: "To promote a better understanding of other people on the part of American people."

This event is well intentioned and should be celebrated for all the above reasons.

What disappoints me is that many on hand have not participated or called for changes in Safety, Health and Security especially when their service went so well.

Awards were given to the Dayton Daily News too. These awards the Dayton Daily News were given were for exposing corruption on behalf of Peace Corps administrators on the numbers of volunteers who have fallen victim to violence in service during the early 1990's and into today. These situations were not a joke and should not be brushed off. Many former volunteers who have been wronged are making sure this dark light during Peace Corps forty five years becomes corrected. Most of all the families of the victims will be provide some relief and celebration for the memorial of their loved one who died in service.

Their have been 34 Volunteers who have died been killed, died or are missing in service since 1996.

Some of the mistakes Peace Corps made were not your's as former volunteers. You served proudly and like to promote your service. Many former volunteers do,even people who have gone through difficuties in service. We are proud of you too.

What we need is real change. We want Doane to understand the Walter Poirer issue is still open. There are many others from Massachusetts who have been wronged by Peace Corps administrators. This is happening throughout the country. People who represent National Peace Corps Association organizations will be challenged to speak for these issues.

There are going to be signifigant changes coming relating to how Peace Corps has handled these issues. You will want to be on the right side, the side of volunteers who served.

Former volunteers such as the people in this meeting need to start speaking out for change within Peace Corps. A Change in Peace Corps policy toward not ignoring the families and loved ones and memories of the servicemembers who have died in service. They have not done enough. Number 2, no former volunteer should be discriminated from a job development, health care and federal jobs because of their service in Peace Corps and being a victim of violence. This has happened to thousands and we want ansewers.

I wish they would make the right changes too.