Snakes on the Plain. In particular, the black mamba 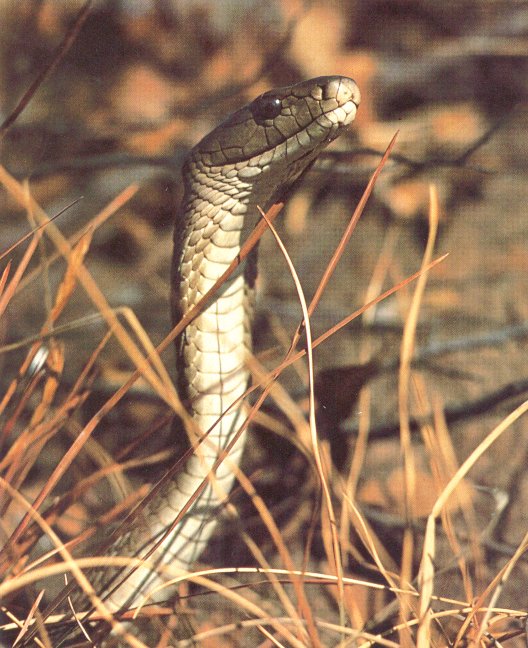 No problem. It is found only in eastern and southern Africa, largely on the grassy plains, and I had absolutely no plans to go there __ until my older son joined the Peace Corps and was sent to Tanzania.

Snakes on the Plain. In particular, the black mamba

The black mamba is renowned and feared throughout its African homeland for its speed, agility and deadly venom. In spite of its name, this snake is dark greyish-brown in colour. The black mamba is a long, dangerous snake from central and southern Africa. It will take readily to the trees, and can move faster than any other snake through thick undergrowth or over open ground. Agile and nervous, it can strike accurately at prey even when moving fast.

Snakes on a Plane. Hah!

Maybe it works as a metaphor for the hassles of air travel these days, but the movie generates more hilarity than horror.

Ill tell you what did scare me when my sons and I visited Serengeti National Park in Tanzania earlier this summer:

Snakes on the plain. In particular, the black mamba.

People who have seen our safari pictures, close-up shots of lions, leopards, cheetahs, crocodiles and elephants, have asked, Werent you afraid?

Of those animals? Never.

Sure, a grumpy elephant could have knocked over our Land Cruiser and stomped us flat. We could have stumbled down the Grumeti River embankment into the toothy jaws of a 12-foot croc. The leopard could have leapt at us as we leaned out of the vehicle for a better look. And, yes, a sign posted outside our tent did warn, Caution! Do not get out of the campsite. Animal may attact human being.

As if animal couldnt attact human being inside the campsite.

Nevertheless, it really didnt occur to me that a man-eating lion would look for a late-night snack in our campsite when the whole park was a movable feast of meaty wildebeest and plump zebras.

No, what filled me with dread was the black mamba __ one of the worlds largest, fastest, most aggressive and deadliest poisonous snakes.

I have had a black mamba phobia since childhood when the snake was featured on an episode of Wild Kingdom. Its potent venom, its tendency to attack at the slightest provocation, its ability to outrun a fleeing man all made the most profound and lasting impression on me.

I concluded then, and held firm to the idea, that this was a snake I never, ever wanted to encounter.

No problem. It is found only in eastern and southern Africa, largely on the grassy plains, and I had absolutely no plans to go there __ until my older son joined the Peace Corps and was sent to Tanzania.

So there I was, camping on the Serengeti plains, facing a long, dark walk from my tent to the outhouse, which was bordered by a snakes paradise of grassy hiding places.

And I was thinking: What an irony. All my life Ive been deathly afraid of this snake, but all I had to do to stay out of its way was to never go to Africa. Now Im here, and its going to kill me.

Look, Im not a wimp when it comes to snakes. When I worked for a newspaper in the mountains, I did a story about two fellows who captured rattlesnakes and copperheads theyd skin for belts and hatbands. I toted their sack of snakes with no fear at all.

My family does not cower before snakes. Mom found one slithering through her kitchen and chopped it in two. Another coiled and threatened to strike at her as she walked up the driveway. Annoyed by its effrontery, she got into her car determined to run it over. Unfortunately it dodged, she veered and the car hit a wall.

But rattlesnakes, copperheads and other uppity snakes native to North Carolina dont measure up to the mamba.

Flashlight beam scanning the path in front on me, I carefully made my way to the campsites outhouse. Opening the door, I thoroughly searched every corner of the interior and peered down into the pit as well. Yes, I anticipated that especially revolting lavatory scene in the movie.

The black mambas were occupied somewhere else that night. In fact, we never saw any snake at all. Thank God.

I did not even mention the black mamba while we were in the park. I waited until we were safely on the road back to Mwanza to ask our guide and driver, Ben, whether there might have been any around.

Probably. You just cant see them in the grass.

How dangerous are they?

Well, Ben said, a black mamba killed six of his uncles cattle at one time. A bite can finish a man in seven minutes. Lots of people in the villages die from snakebites. The black mamba is more dangerous than a cobra, which first tries to get away if its threatened. The mamba attacks.

Yep, just what I thought.

I doubt there was a black mamba on that plane in the movie. Even Samuel L. Jackson would have been no match for it.

This story has been posted in the following forums: : Headlines; COS - Tanzania; snakes; Wildlife