John Coyne writes: The Lion in the Gardens of the Guenet Hotel 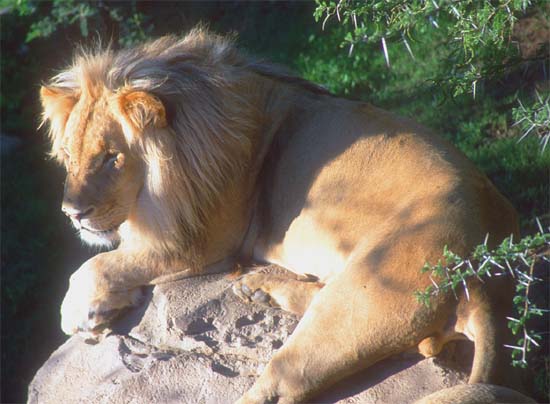 "The Guenet Hotel, even in 1962, was one of the older hotels in Addis Ababa. It wasn’t in the center of town, but south of Smuts Street and down the hill from Mexico Square, several miles from where we were housed in the dormitories of Haile Selassie I University. While out of the way, this small, two story rambling hotel, nevertheless, had a two-lane, American-style bowling alley, tennis courts, and a most surprising of all, a real lion in its lush, tropical gardens."

John Coyne, editor of the "Peace Corps Writers" web site, served as a Peace Corps Volunteer in Ethiopia in the 1960's.

John Coyne writes: The Lion in the Gardens of the Guenet Hotel

The Lion in the Gardens of the Guenet Hotel

[Here’s a story I have been telling for years….]

The Lion in the Gardens of the Guenet Hotel

In the fall of 1962 in the final days of our in-country Peace Corps training in Ethiopia, we had a celebration dinner at the Guenet Hotel in the Populari section of the capital Addis Ababa.

The Guenet Hotel, even in 1962, was one of the older hotels in Addis Ababa. It wasn’t in the center of town, but south of Smuts Street and down the hill from Mexico Square, several miles from where we were housed in the dormitories of Haile Selassie I University. While out of the way, this small, two story rambling hotel, nevertheless, had a two-lane, American-style bowling alley, tennis courts, and a most surprising of all, a real lion in its lush, tropical gardens.

At that time in the Empire no Ethiopian was allowed to keep a lion, the symbol of His Imperial Majesty’s dynasty. The Emperor, Haile Selassie, whose full title was Lion of the Tribe of Judah, Elect of God, Emperor of Ethiopia, had a private collection of animals, including the Imperial lions, antelopes and monkeys, as well as cheetahs, all at Jubilee Palace, his royal residence.

There was also a small government lion park near the main campus of Haile Selassie I University at Sidist Kilo, a quarter mile below the American Embassy. This park had about twenty full-grown lions in a large circular cage and sometimes late at night we would hear them roaring in the distance.

Occasionally, and rarely, a wild lion would wander down from the nearby Mt. Entoto looking for food and be spotted by townspeople and that would create headlines and eye-witness accounts in the next day’s morning paper.

So, seeing a lion up close and personal in the heart of Africa was something special for a group of young Americans new to Africa.

Over 275 Peace Corps Volunteer teachers had arrived in Addis Ababa in September at the end of the African Highland long rains. We were the first Peace Corps Volunteers to Ethiopia and in our final days in Addis Ababa, before being dispatched to our teaching assignments throughout the Empire, we had a farewell dinner at the Guenet Hotel. It was the first time any of us had been to the Populari section of the city or seen the lovely gardens of this hotel or their caged lion.

Well, actually it was a caged lion and a large German shepherd dog.

As I recall when I first saw the lion the German shepherd was stretched out comfortably between its paws, and both the dog and the lion were calmly gazing out through the bars of the small cage at the lot of us. The dog, of course, came and went through the narrow bars but we were told by the hotel staff that he always spend the night sleeping inside the cage, curled up with the lion.

I had been assigned to teach at the Commercial Secondary School in Addis Ababa and in the early fall of that year was living in the Populari section of the city, near the Guenet Hotel.

The Peace Corps had issued bicycles to whoever needed them to get to school and I had gotten into the routine of riding back and forth to classes and also of stopping off at the hotel for a coke or coffee after school to correct my students’ homework while sitting in the gardens of the Guenet surrounded by thick bougainvillaea bushes, wild roses and carnations, and gnarled cedars draped with streamer-like leaves. It was here that I came to know the lion and the German shepherd, who often slipped out through the bars to beg food from me while his partner stood at attention against the bars of the cage silently watching the transaction. They were quite an odd couple.

On one of my mid-day rides home for lunch, when I was pell-melling down a steep hill of the city, an American pulled his car up along side and singled me to stop.

He turned out to be a TWA pilot employed by Ethiopian Airlines and he invited me, and several others Volunteers, to a “home cooked” dinner that weekend. It was his way of welcoming the new Peace Corps to the Empire.

Trans World Air Lines had managed Ethiopian Airlines since 1946 and by the time we reached the Empire in ’62 over a third of the trained pilots were Ethiopians. The management by TWA of the Ethiopian Airlines is one of the great early success stories of private development in Africa.

The American pilot who invited me to dinner had been in-country for several years and when I mentioned the lion in the garden of the Guenet he asked me if I knew the story of how the lion had gotten to the hotel.

It seems the first American TWA director in Ethiopia had raised the lion from a small cub in his home’s compound along with the family’s dog. The lion was such a household pet that everyone who visited the house treated it as such.

But there was the time the CEO of TWA worldwide came to Ethiopia to meet the Emperor and visit his overseas operation. He arrived at dawn in Addis Ababa on an overnight flight from Europe and immediately taken a morning nap at the managing director’s home.

Late that afternoon, rested, the CEO was sitting with a half dozen American pilots who had stopped by for a drink and to meet their boss. They were all sitting in the livingroom of the house with the French doors open to the garden watching the African sunset and enjoying the first cool breeze of evening.

Sometime towards dusk, the full grown lion, who had been asleep in the sunny terrace beyond the French doors, woke up and ambled passed the open door, gazed in at the assembled group, and then ambled off.

No one commented about the lion, as all the pilots knew about the animal. However, the visiting CEO had no idea the enormous mane lion was a household pet and sat petrified at the sight of this legendary African beast, loose and yards from him.

Terrified, he didn’t say anything until the next morning when he confessed to his host what he thought he had seen, thinking it must have been a frightening fantasy caused by his fear of being in Africa.

In time, the American manager’s tour was finished and the family decided to give the lion to the nearby hotel as the tame animal could not be returned to the wild. The German shepherd, however, would go back to America with them.

In the weeks before their departure, the lion was successfully transferred, but when the family realized the German shepherd was so lonely and unhappy with the loss of his companion they decided to leave the dog, giving both animals to the Guenet where they could live peacefully in the small cage in the hotel gardens. And it was there that I found them when I arrived in Addis Ababa.

I left Ethiopia in the mid-sixties and did not return again until the early ‘70s. While I had a short list of old friends in Addis I wanted to see, high on that list also were the lion and the German shepherd in the gardens of the Guenet.

A day or so after arriving, I took a taxi to the hotel which had thankfully not changed much in the years I had been away and walked into the garden to find the caged lion and the German shepherd.

The cage was where I remembered it. However, the door was wide open and the lion was gone. Sitting alone in the middle of the empty concrete floor was the old German shepherd.

I walked inside to the front desk of the hotel and asked about the lion and was told the animal had passed away only months before. In fact, it was such a news event a story had been written about his death in the Ethiopian Herald, the English language newspaper in the country. The staff found a copy of the article that detailed the demise of the lion and I sat down in the lobby of the old hotel and read the account.

Several months earlier when the lion was suffering from an infected tooth doctors from the Pasteur Institute of Ethiopia decided to drug the animal so the tooth could be extracted. Unfortunately the dart of drugs was too much for the old animal and the lion died before it could be saved.

The hotel had not yet decided what to do about the lion cage for the dog still lived there, spending his days waiting for his lifelong companion to return.

I gave the article back to the receptionist, thank him for the information, and then I went out into the garden and walked through the open gate and inside the cage. I knelt down beside the German shepherd and petted the old dog one last time, then I left Addis Ababa and Africa.

I have never been back.

This story has been posted in the following forums: : Headlines; Figures; Writers; COS - Ethiopia; Wildlife