India RPCV Leonard Robinson devoted his life to the underserved 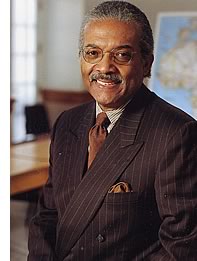 India RPCV Leonard Robinson devoted his life to the underserved

Colleagues share memories of Leonard Robinson, the University's first diplomat scholar in residence who devoted his life to the underserved

"Be the change you want to see in the world." Leonard H. Robinson, the University's first diplomat scholar in residence, lived according to Mohandas Gandhi's creed, devoting his life to educating others about Africa. He passed away July 25, following a short illness, leaving many colleagues and friends to both mourn his death and celebrate his life.

Grossman, who grew up in India, met Robinson there about 40 years ago. At the time Robinson was a Peace Corps volunteer and had finished his undergraduate studies at Ohio State University.

"You knew he was going to be a Peace Corps volunteer that grew into a formidable world leader," Grossman said. "And he did. You knew it even then."

Robinson devoted his life to international relations, specifically the promotion of Africa and bringing Africa into the global community. He has held many positions including deputy assistant secretary of state, president of the U.S. African Development Foundation and president and CEO of the Africa Society, a leading advocacy group.

"He dedicated everything he had to The Africa Society," said Bernadette Paolo, vice president of the group. "He was the founder, so it was basically his creation. He wanted it to be the premier entity of African education in the United States of America. Doing that required a Herculean undertaking -- an exhaustive effort, and he committed his life to that effort."

Dierdre Davie, administrative assistant to the vice provost for international affairs, said Robinson was instrumental in getting some University students interested in the big picture of Africa.

"Africa is not on the horizon so much, as far as the American public," Davie said. "There's more focus on the Middle East. But [Robinson] really connected with Africa, and it was his mission to really bring that enthusiasm to students here at U.Va."

Grossman highlighted Robinson's connection not only with Africa but other places and people as well.

In addition to Robinson's charismatic and charming nature, Paolo said he admired Robinson's ability to relate with a diverse range of people.

"He had a lot of different aspects to his personality," Paolo said. "He was a diplomat, yet he could engage with people from all walks of life, all ages. And that was a very special characteristic."

Davie also felt that this was one of Robinson's most unique and admirable characteristics.

"He had done so much, but he was still so approachable and still interested in working with students just starting out in their careers," Davie said. "And he had an unbelievable amount of energy. He was a blur. He would come flying through [the Provost office] on the way to a meeting or on the way to class. He had tremendous enthusiasm and energy. It was really wonderful to see that."

"This was a man who always pointed toward the possible," Grossman said. "And so, as many people become beaten down in their goals because they're not reaching them, he always kept moving toward the possible and the probable, which made him an exceedingly attractive leader."

Robinson's admirable characteristics and devotion to his work led him to make a tremendous impact in the realm of international affairs -- and also in the realm of the University.

"He cared about education a great deal, as evidenced by his tenure at the University of Virginia," Paolo said. "He cared about young people in our country having an interest in what was going on in the rest of the world. [He saw this as] important, not only in their development, but in the future of our country and in the world at large."

With this objective in mind, Robinson made a remarkable impact upon the University community.

"We were fortunate -- I mean, extremely fortunate -- to have had Leonard here at U.Va., even for the very short period of time he was here," Grossman said. "He was, besides being brilliant and superbly schooled in his area of expertise, a superb academic teacher and a consummate role model of vision and energy which he shared with everybody that came across his path."

Grossman also emphasized the importance of Robinson's practical experience of decades of working on Africa in bringing real meaning to what he taught here at the University. Davie agreed.

"I think his students appreciated that he was a guy who was still in touch with events as they were unfolding, but he came down to U.Va. and was teaching them about Africa," said Davie. "He really connected well with his students. He was really interested in and cared deeply about them, which is something I admired deeply."

Robinson taught a University Seminar about politics in southern Africa and had just signed on as a full time faculty member. In addition, he mentored many students.

"He spent a lot of time talking to them," Davie said. "How they should go about [things], what their options were. That was really important to him."

Grossman added that he was a unique mentor of students and colleagues alike in terms of assisting them in their goals to globalize the University.

"We all really liked him here in the Provost office," Davie said. "He'll be really sorely missed -- his enthusiasm and his great sense of humor. He would come into the office, and had a big hello for everyone every time he came. He used to bring boxes and boxes of chocolate, which was really sweet."

"The tributes and the music and the people and the ambiance -- it was so Leonard in that it was perfect, elegant, dignified; those reflect Leonard's characteristics," Paolo said. "And then the diversity of the audience was also a testament to his belief that all Americans should be included in working for Africa, all ages, all cultures, it was a testament to his life."

"He had many accomplishments, and they are well documented," said Paolo. "But I cannot tell you how much pride it gave him to be the first diplomat in residence for Africa at the University of Virginia."