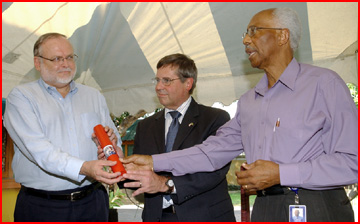 Caption: Dr Howard Anderson (left), the US Peace Corps' new country director to Jamaica, receives the symbolic baton of leadership from his predecessor Suchet Loois (right) at a handing over ceremony at the Peace Corps' New Kingston offices on Friday afternoon. Sharing in the experience is the US Embassy's Deputy Chief of Mission James Heg. (Photo: Bryan Cummings)

Howard Anderson Friday afternoon officially took up his post as new United States Peace Corps country director for Jamaica after being handed the baton by his immediate predecessor Suchet Loois in a ceremony at the Peace Corps office in New Kingston.

Anderson, Jamaica's 19th country director, comes to the post with a wealth of experience, having held similar positions in Zaire, Swaziland and Mali in the early 1990s. His most recent appointment took him to Islamabad where he worked as the United States Department of Agriculture's agricultural attaché for Pakistan and Afghanistan.

He received post-graduate training at the Indiana University where he attained a doctorate in Policy Analysis in 1986. He also studied political science and graduated from Western Washington University with a Master's and a Bachelor's degree in the field.
The former Peace Corps volunteer who has never been to Jamaica or the Caribbean before now, expressed enthusiasm about his new position and said he will continue to build on the legacy of the well-functioning programme he has inherited.

Loois, one of only two country directors in the 44-year history of the organisation to have served five years in Jamaica, expressed heartfelt pride and appreciation for having served the country and for the support he had received from stakeholders. He described the experience as "the best I've ever had in the 30 plus years of my professional life".

"I'm departing with a heavy heart, but I'm proud to know that when I'm passing the baton, I will be doing so to the right CD," he said during the brief ceremony.
Loois singled out some of the advances made in the corps under his watch, particularly increased training, higher levels of safety and security, the acquisition of administrative software and improvements in staff and volunteer relations.

The Peace Corps concentrates on the areas of education, youth outreach, and community development; health and HIV/AIDS; agriculture and environment; business development; and information technology. Its goals centre around helping the people of host countries meet their need for trained men and women, as well as helping to promote a better understanding of Americans in the countries served, and vice versa.
The organisation came to Jamaica in 1962, one year after it was established in the United States.

This story has been posted in the following forums: : Headlines; COS - Jamaica; Country Directors - Jamaica