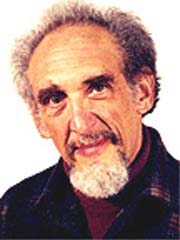 Berger has been working with sound for the best part of 30 years. He has won four Oscars; for Apocalypse Now, The Right Stuff, Amedeus and most recently The English Patient, "I've thanked my wife and family four times!", he says dryly. His Oscar for Apocolypse Now seems particularly deserved; he recounts how whole sound process lasted nearly two years and he reckons they recorded between ten and fifteen thousand individual effects.

To sit in on a sound mix might not seem that exciting to the uninitiated, as each scene is played again and again, but spend an hour with Mark Berger and you'll never see sound in the same light again. As he sits at the mixing desk in the Dubbing Studio at Ardmore Sound, a luddite's nightmare of flashing buttons at his fingertips he has the air of a wise professor who has been though as many revolutions, technological and otherwise to last a lifetime. The director and editor of Irvine Welshe's Acid House Trilogy are working with Mark to put the final sound 'polish' to the gritty violent and bleak Scottish drama. It contains as much violence and swear words as you are ever likely to see in one short intense drama. What with the thick Scottish brogue I'm not sure if Mark or myself even caught half the swear words. But Mark has heard it all before. Afterall, he did work on Apocalypse Now.

Berger has been working with sound for the best part of 30 years. He has won four Oscars; for Apocalypse Now, The Right Stuff, Amedeus and most recently The English Patient, "I've thanked my wife and family four times!", he says dryly. His Oscar for Apocolypse Now seems particularly deserved; he recounts how whole sound process lasted nearly two years and he reckons they recorded between ten and fifteen thousand individual effects. "There was a time when I did everything. We would record the sounds on location. For Apocalypse Now nothing that was recorded on location could be used because they were recorded for dialogue. There was no Vietnam War sounds in the Sound Libraries so we had to go on manoeuvres with the army. It was especially important when they were using live ammunition because some guns sound very different when they are shooting blanks than shooting live ammunition. We got every kind of conceivable weapon that was fired in Vietnam. We recorded it all."

Attention to detail seems to be his trademark. For One flew Over the Cuckoo's Nest the sound team went to the Napa State Mental Hospital and recorded the patients speaking in tongues, yelling, moaning and just walking around. "When you're under the influence of a lot of very heavy tranquillisers there is a particular sound of feet shuffling, wearing soft slippers and constantly walking around in circles. Then we recorded people banging their head against walls. All of those sounds 'Cuckoo's Nest' are actual real sounds, of real people on the wards."

Mark never actually studied sound and sort of fell into it accidentally. He studied experimental psychology and for a while was even a brain surgeon. As a hobby he produced radio documentaries in College. After graduating in 1965 he went into the peace corps and worked in educational television in Colombia. Then he got a job as a sound Recordist on an educational film for a civil rights organisation. By this time he was well and truly hooked and continued to work in documentaries. These were glory days of documentary in America, Cinema Verité was in vogue, Pennebacker, and Leacock the high kings. After his years working on documentaries his first feature was auspiciously enough Godfather II. "At the time we made up a title called Sound Montage Associates which s a very pretentious way of saying we were sound editors and mixers and we basically did everything."

At that time, before the technological revolution, the whole approach to sound was very different to to-day. "You had to make a lot of decisions very early on, because all the different effects were mixed together in a way that couldn't be separated later. So I learned very early on to decide how I wanted something and having made that decision to stick with it and to anticipate how something was going to be used. You learn how to visualise well visualise isn't the right word cause you're not using your eyes but to sonorise, to imagine how the entire sound track is going to be like before it's done. Much as a painter will imagine how the finished painting is going to look before how he even starts. This is actually an important point because it bears on how technology is used to-day. Because we couldn't postpone all our decisions until the last moment we didn't we learned how to integrate everything from the time we started." Though Berger uses all the modern technology at his disposal he believes that sound is conceptual more that technical. "The sound doesn't come out of the machines the sound comes out of what you're imagining."

It's probably true to say that for many writers and film-makers sound is always an afterthought, something that, naturally enough, Berger sees as a major flaw. "You have to remember that it is a visual medium but sound in the sense of dialogue and music has always been an important component. For low-budget films you don't have to have a lot of money and forty-eight sound tracks and computerised editing and a giant mixing board to get the right sound. The ideal sound for a movie in any scene is the one sound that will give an emotional context to the scene. It could be very sparse but it could be very evocative and very emotionally moving. It doesn't have to be complicated, it just has to be right. And that is independent of budget, if you think about it ahead of time. If the director and the sound editor can be involved at a very early stage then it can be made easier."

This story has been posted in the following forums: : Headlines; COS - Colombia; Hollywood; Movies; Engineering; Sound; Awards