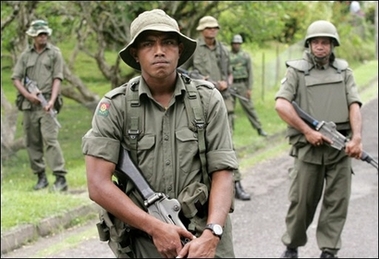 The military seized control of Fiji on December 5 after weeks of threats, locking down the capital with armed troops and isolating at home the elected leader whose last-minute pleas for help from foreign forces were rejected.

PCOL Comment: We have been holding this story until we received confirmation from the Peace Corps that all volunteers are safe and accounted for.

SUVA, Fiji - The military seized control of Fiji on Tuesday after weeks of threats, locking down the capital with armed troops and isolating at home the elected leader whose last-minute pleas for help from foreign forces were rejected.

The coup was the fourth armed takeover in the South Pacific country in 19 years, and had its roots in the same ethnic divide that produced the previous three.

Commodore Frank Bainimarama, the armed forces chief, announced in a nationally broadcast evening statement that, "As of 6 o'clock this evening, the military has taken over the government, has executive authority and the running of this country."

He said he had assumed some powers of the president and was using them to dismiss Prime Minister Laisenia Qarase, elected in May.

He named Dr. Jona Senilagakali, a military medic with no political experience, as caretaker prime minister and said a full interim government would be appointed next week to see the country through to elections that would restore democracy sometime in the future.

The move was denounced by elected officials and the president, the police force, and countries and international organizations with connections with Fiji.

"The government they want to set up will be totally illegal," Qarase told a small group of reporters inside his house in Suva, where he said he was under effective house arrest. "What the military commander has done has raped our Constitution."

New Zealand announced it was suspending defense ties with Fiji and would ban its military officers from traveling to the country. Bainimarama is believed to have children living in New Zealand.

"This is an outrage what is happening in Fiji," Prime Minister Helen Clark told reporters in Wellington, the New Zealand capital.

Britain also announced it was suspending military aid to Fiji, and Don McKinnon, the secretary general of 53-member Commonwealth of Britain and its former colonies, said Fiji was likely to be suspended from the group later this week.

Australian Prime Minister John Howard revealed that Qarase had asked him early Tuesday to send troops to Fiji to try to stop the coup. Howard refused.

"I did not think it was in Australia's national interest to become involved. The possibility of Australian and Fijian troops firing on each other in the streets of Suva was not a prospect that I for a moment thought desirable," Howard told reporters in Canberra.

As tensions built in recent weeks, Australia sent three navy ships to waters off Fiji that Canberra said would be used only to evacuate Australian citizens in the event of a coup.

Last week, Bainimarama accused Australia of planning an invasion, and had troops fire mortar flares over the harbor and set up security checkpoints around government buildings in a show of force.

Fiji is among the richest and most developed nations in the South Pacific, attracting up to 400,000 tourists a year to resorts built on idyllic beaches. It also exports sugar and gold.

But it has lurched from one political crisis to the next since the military twice grabbed power in 1987 to ensure political supremacy for the 51 percent majority indigenous Fijians, cutting out the 44 percent ethnic Indian minority.

Gunmen, angry those advantages were being eroded by the first Indian-led elected government, seized Parliament in a 2000 coup that brought Qarase, a moderate nationalist, to power in a deal brokered by Bainimarama. Qarase has since won two elections, based partly on populist policies that appealed to indigenous Fijians.

Bainimarama sees himself as the guardian of Fiji's constitutional guarantees to all Fijians, and opposed as racist legislation proposed by Qarase that would pardon conspirators in a 2000 nationalist coup and secure coastal land rights for indigenous Fijians.

Bainimarama offered to suspend work on the bills, and abandon them if a review found them to be unconstitutional.

Bainimarama said his actions Tuesday were "undertaken with a great deal of reluctance."

"We trust that the new government will lead us into peace and prosperity and mend the ever-widening racial divide that currently besets our multicultural nation," he said.

Fiji Police Chief Andrew Hughes, an Australian who took leave from Fiji when he recently became a target of the military's ire, said he believed Bainimarama's coup would fail.

"He doesn't have the support of the government, of the president, of the police, of the churches, of the chiefs, of the people of Fiji," Hughes told Australian Broadcasting Corp. television. "I can foresee a popular uprising."

Newspaper, radio and television outlets said Tuesday they had been ordered not to show video of Qarase and to allow officers to vet their stories. One newspaper decided not to publish rather than submit to censorship.

"They wanted to put somebody in the newsroom to vet ... editorial content and control any propaganda favorable to Qarase," said Tony Yanni, publisher of the Fiji Times newspaper. "We said you can't come in and the editor decided we can't publish under these circumstances."

This story has been posted in the following forums: : Headlines; COS - Fiji; Safety